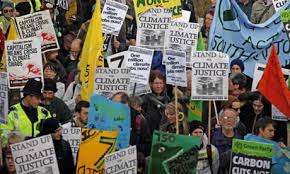 Physicist’s approach to finding answers is all wrong. Warmist have shone the true path. Physicists have been looking for the theory of everything for a long time. Relativity is the theory of big things like heavenly bodies and velocities approaching the speed of light. Quantum mechanics is the theory of little things like atoms and protons and photons. They search for the one theory, a unifying theory, that can explain the physics of both big and little things.

But they are having problems. They observe the cosmos and have to invent dark energy and dark matter to explain the unexplainable like why the universe is expanding at an ever increasing rate. They smash particles together and have to explain what they observe by inventing a string theory where the building blocks of nature are just vibrating strings in twelve dimensions.

In the world of the warmists, you don’t actually look for a theory to explain what is observed, you merely state the answer you want and dispense with the idea that it is a theory and proclaim it a fact. As the physicists have demonstrated the scientific approach can be bothersome and unnecessarily delay getting to the desired result.

In case you missed the warmists approach, here is how it goes. As near as I can tell they state as a settled fact that mankind, that is men and woman, create carbon dioxide and carbon dioxide is a greenhouse gas so men and woman are changing the climate.

Their corollary to man-made climate change is that global warming will be the cause of everything bad that can happen and nothing good. And since you can’t disprove this because global warming hasn’t happened it must also be a fact.

Crowd of sympathizers agreement is important to warmists. If 1500 non-climate scientists and the liberal media all agree with the climate facts you have made up then the facts are settled. I had an example of how this works just the other day. I was sitting in my home working on the theory of nothing, you have to start somewhere, when I heard a commotion in the street. I investigated and observed a crowd of sympathizers with a leader shouting “the government creates everything”. Nonsense I thought so I ran into my garage and hammered two pieces of wood together and proclaimed to the crowd of sympathizers “See this, I just created it”. They replied practically in unison “no you didn’t, the government did and that proves what we say”. Most of the bystanders, who wouldn’t understand the theory of nothing if I knew what it was, nodded in agreement with the crowd of sympathizers.

This is a very effective method to prove your facts, I thought. If bystanders would rather believe what the crowd of sympathizers say rather than what they actually observe then I must use this approach when I decide what I want the theory of nothing to prove if anything.

Needless to say the warmists have shone me the way.

By the way, some physicists have an approach similar to that of the warmists. Since they can’t explain why our universe acts as it does, they claim there are an infinite number of parallel universes none of which we can observe other than our own. And on each one of these universes nature works in different ways. Try to disprove that. Then the answer to why things work as they do in this universe is obvious. There is no reason so we can stop looking. We just happen to be in the universe that luckily works in just the right way to support life as we know it. If we were in a different universe then nature would work differently in some random manner and we probably wouldn’t be alive so the reason to stop looking for how nature works can never be proved wrong.

This gives me an idea.  Using what I have learned from warmists showing me the way, I am going to prove planets in parallel universes also have climate change. .  Shouldn’t be difficult.