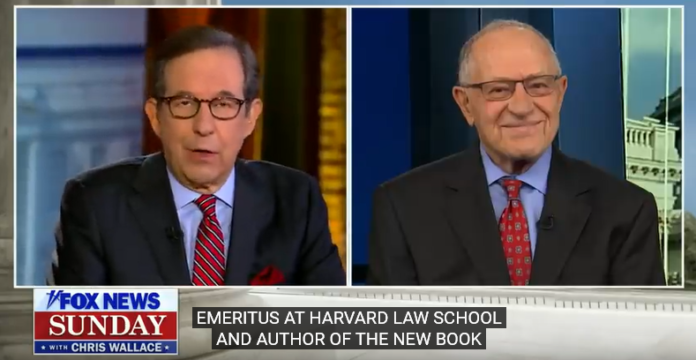 Dershowitz’s bio notes that he is “a graduate of Brooklyn College and Yale Law School, joined the Harvard Law School faculty at age 25 after clerking for Judge David Bazelon and Justice Arthur Goldberg…He has also published more than 1000 articles in magazines, newspapers, journals and blogs such as The New York Times Magazine, The Washington Post, The Wall Street Journal, The Harvard Law Review, the Yale Law Journal, Huffington Post, Newsmax, Jerusalem Post and Ha’aretz. Professor Dershowitz is the author of 30 fiction and non-fiction works with a worldwide audience.”

Additionally, “Professor Dershowitz has been awarded the honorary doctor of laws degree by Yeshiva University, Brooklyn College, Syracuse University, Tel Aviv University, New York City College, Haifa University and several other institutions of learning. He has also been the recipient of numerous academic awards including a Guggenheim Fellowship for his work on human rights, a fellowship at The Center for The Advanced Study of Behavioral Sciences and several Dean’s Awards for his books.”

Chris Wallace previously worked for NBC News from 1982 to 1989 and ABC News from 1989 to 2003. He was awarded three Emmy Awards and a Peabody Award for journalism. He holds an undergraduate degree from Harvard University where he did not study law.

Despite no evidence of Wallace’s legal education or experience, Dershowitz acknowledged that Wallace taught him several insights into Constitutional Law applicable to the impeachment of President Trump that he, Dershowitz, had not considered. Dershowitz confessed that he had not encountered the extensive knowledge Wallace displayed at any time during his decades in the research, teaching and practice of the law.

Dershowitz said, “I learned much from Chris that I didn’t know during my debate with him. I now acknowledge him as a much better legal scholar than I ever was.”

Although not a graduate of Harvard Law, sources at the university suggest that Wallace may be considered for an Honorary Doctor of Jurisprudence Degree in the near future. Particularly if Trump is removed from office.