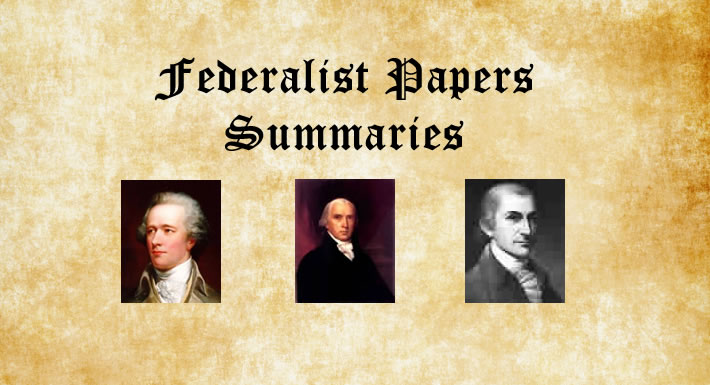 The Federalist Papers Summary gives an overall view of the essays written by Alexander Hamilton, James Madison, and John Jay as well as a summary on each individual essay in this 85 piece series.

The Boston Tea Party is a major link in the chain of events that resulted in the form of government we enjoy today. After the Tea Party, Britain responded with economic actions including a blockade of Boston Harbor. This in turn resulted in the States convening the First Continental Congress in1774 with the purpose of petitioning King George III for a redress of their grievances and also to plan for economic retaliation through boycotts of British trade. The King’s failure to redress grievances and the success of the boycott led to the beginning of the Revolutionary War in 1775 with the shot heard around the world in Lexington and Concord.

The Second Continental Congress convened in 1775 after the war began was the first true governing body for the 13 states. Two accomplishments were important to our current form of government, The Declaration of Independence which declared that Governments derive their power from the consent of the governed and designing the Articles of Confederation which became the constitution governing the states. The purpose of the Articles was to bind the 13 states together in a perpetual union characterized as a firm league of friendship with each other, but not a nation with a national government. The states were reluctant to give up their sovereignty so the central government was made very weak with no powers to tax, raise armies, or regulate commerce between the states. Not being able to tax or raise armies may have ended our struggle for independence during the war had it not been for the leadership of General George Washington. After the war, competition rose between the states because of the inability to regulate interstate commerce. An additional weakness of the Articles was the required unanimous consent to amend the Articles and the required 9 of 13 states to agree to any new law essentially making the legislature unworkable.

To solve these problems and amend the Articles a constitutional convention was called for and began in Philadelphia on May 25, 1787. This convention of course did not amend the Articles but instead created a draft of the current US Constitution and released it for ratification hopefully by at least 9 of the 13 states. This constitution, also called at the time the Philadelphia draft or Philadelphia proposal, contained only mandates with no explanations, a governing philosophy unique in the history of the world where the people were sovereign, and no official written record of the secret proceedings, so ratification was not assured without some education as to why this constitution was necessary to satisfy the nations need’s.

Alexander Hamilton and James Madison with help from John Jay in foreign affairs took on this task in the Federalist Papers focusing primarily on New York considered one of the states key to ratification but whose delegation except Hamilton walked out of the convention in protest without endorsing the draft. Hamilton, a lawyer, and Madison, an agrarian, were the leading experts on the draft and well qualified to defend it. The issues covered in the original papers and in the summaries below are those with unique aspects to this new form of government, namely federalism, division of powers, representation, and sovereignty of the people.

As you read the Federalist Papers Summaries and contemplate the task they were trying to achieve you might ask yourself if history is repeating itself and if our nation, its people and their representatives need to be reeducated in why this constitution is necessary to satisfy the nations need’s today as it did in 1787. Three facts for consideration, a portion of our population increase is from immigrants and others without an innate sense of what it means to be an American, our schools lack an interest in teaching the constitution and some of our representatives in high office are violating the document they have sworn to uphold. Perhaps a modern day Hamilton or Madison will read the summaries consider these issues and conclude a repeat of the original task is necessary and decide to author The Tea Party Papers.