The Birth of the TEA Party Movement

The Tea Party History
Its Birth, Its History, and Its Future
Revised July 30, 2010 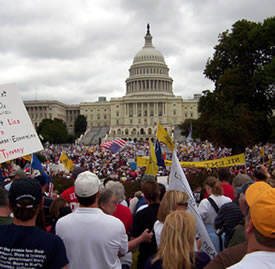 There are many who would love to take credit for the birth of the Tea Party Movement, but the actual credit for the movement is still under debate. One version dates back to 2007 on the anniversary of the Boston Tea Party when Ron Paul’s presidential campaign raised over 6 million dollars in one day and as a result, the Tea Party was born. Another version has the credit for the modern movement going to a user on tickerfourm.org that goes by the name Gmak. Tom Martin of the American Preppers Network did his homework of sifting through all the blogs and forums on the internet and came to the conclusion that Gmak posted an article on January 19th 2009 with the title “Mail a Teabag to Congress and Senate”. On January 20th 2009, Karl Denninger with the Market Ticker posted an article entitled “TEA PARTY February 1st?” This is the post that went viral in which hundreds of emails were sent out and countless blogs and forums were referencing the February 1st Tea Party. From those emails, it’s really hard to say how many subsequent emails were forwarded, but it is safe to say that it was well into the tens of thousands if not more. I remember receiving one and forwarding many myself. There are also other posts that pre-date the January 19th post, but the article posted by Karl Denninger is the one that went viral. Whether it was Ron Paul or Gmak, the actual credit for the idea of the Tea Party goes all the way back to the “Sons of Liberty” in 1773. The symbolism of that historical day is what has translated today into the birth of the modern Tea Party Movement.

Who started the TEA Party Movement?

Who actually started the TEA Party is debatable. Some say is was CNBC reporter Rick Santelli on February 19, 2009. Others say it Ron Paul back in 2007. Still others credit a user on tickerforum.org that went by the handle Gmak that posted an article on January 19, 2009 calling for people to mail teabags to members of Congress and the Senate. No matter who started it, the movement turned into the largest grassroots uprising in modern history in the United States.

While the history of the modern Tea Party Movement is short, it has been active. The mailing of tea bags to Washington caused quite a stir on Capitol Hill and even on the White House lawn where one protester threw tea bags over the White House fence. White House security used a robot to further investigate this “unknown substance” which made national news. On April 15th 2009, protesters unloaded one million tea bags in Lafayette Park, but were forced by officials to reload the trucks because party organizers did not have the “proper” permit. A similar protest scheduled outside the Treasury Department was cancelled because the US Secret Service prevented protesters from gathering because again, organizers did not have the “proper” permit. Protests sprang up all across the United States on April 15 and July 4th, but the actual number of protesters is likely never to be known largely due to the reporting of the mainstream media. In places where there were obviously hundreds of protesters present, the media reported “dozens”; in other places where thousands of protesters were present, the media reported “hundreds.” Along with the lack of reporting by the mainstream media, liberal politicians came out strongly opposing the Tea Party Movement.

House Speaker, Nancy Pelosi, said of the movement, “The Republican Party directs a lot of what the Tea Party does, but not everybody in the Tea Party takes direction from the Republican Party. And so there was a lot of, shall we say, Astroturf, as opposed to grassroots.” Liberal figures have tried to classify we the people as a “Republican” right-wing conspiracy and an “astroturf” movement funded by political interest groups; the group has been categorized as racist, neo-Nazi, redneck, ignorant, and many other similar terms. Why would the liberals do this? The answer, quite simply, is fear. The sheer number of protests rising up across the US has sent shock waves through the liberal establishment. The media, the Hollywood liberals, and the politicians have all broken out the Saul Alinsky playbook and are trying to demonize, demoralize, and destroy the opposition with this verbal assault in an attempt to discredit and minimize the impact of Americans exercising their right to free speech. Their efforts thus far have failed because the future of the movement is poised to change the landscape of American politics for decades.

The modern day movement has only been on the scene less than two years, but during that time has scored some substantial victories in recent elections. Tea Party supported Rand Paul’s primary victory over GOP backed Trey Grayson, Scott Brown’s victory to win Ted Kennedy’s long-held Senate seat in Massachusetts, and Ed Henry’s victory to win the District 9 Republican nomination for the House of Representatives are just a few of the victories marked by candidates supported by the movement. In upcoming primaries and run-off elections, incumbents of both the Democrat and Republican parties are in fear of losing their seats to Tea Party supported candidates. While the long-term future of the movement is unclear at this point, its short-term sites are clearly set on the November 2010 elections.

The make-or-break future for us rests upon the methods employed by the group leading up to and beyond the November 2010 elections. The opposition has watchful eyes upon us waiting for that one mistake that can be exploited in order to discredit the entire movement. Therefore, the methods we use must remain above reproach. In registering voters, we must not use “Acorn” tactics and must have all voter registrations above board.  Up to this point, no matter what the media has reported, protest rallies have been non-violent in nature and must continue to remain so. In addition to methods we use, the message of the organization must be clearly defined and communicated throughout the political process.

The slogan that I have heard many times at rallies is “vote them out”, but the key is not just to vote out incumbents, but to vote in the candidates who reflect our ideals. How well these ideals are communicated remains to be seen. President Barak Obama recently said that we “want little government or no government at all.” What a ridiculous statement; only an anarchist would want no government at all and the resulting chaos. What we want is limited government as set forth in the Constitution of the United States, but to what extent is that message reaching the public? Without the support of the mainstream media, the task of reaching the voting public will be much more difficult, but it can be done nonetheless. Members and groups alike will have to be coordinated in their efforts in the use of blogging, newsletters, mailing lists, internet posts, social media such as Facebook, and many additional methods of communication and opinion sharing that the internet has to offer. If you are not a member of a group, join one and help get the message out for your local group, your country may depend on it.

We are at a critical point in the history of America and the direction it takes for the future. The path we are currently on is unsustainable and will either bankrupt the country or leave a mountain of debt for generations to come. America, we cannot allow this. We must stop the out of control spending by those in Washington. We must elect into office fiscally responsible individuals who are once again “of the people, by the people, and for the people.” Join us, get informed, and get involved – before it’s too late.