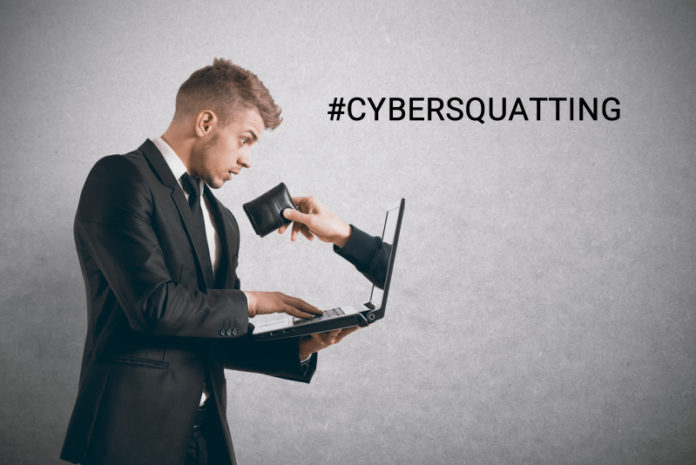 Domain squatting or cybersquatting in politics is nothing new, but is ethical? Is it even legal? In this piece, we delve into political cybersquatting and the attack on Apostle Claver Kamau-Imani.

Cybersquatting is the act of registering, trafficking in, or using a domain name in bad faith.

Starting in the early days of the internet and continuing still today, cybersquatting became a common practice of those hoping to profit from reselling a domain to those willing to pay a high price for it. For example, a notorious cybersquatter named Jeff Burgar purchased the domain names TomCruise.com and CelineDion.com among many other celebrities. Tom Cruise took his case to the WIPO (World Intellectual Property Organization) who eventually in 2006 ordered that the domain be transferred to Tom Cruise because the domain was proven to have been “Registered and Used in Bad Faith.”

Cybersquatting was deemed illegal in 1999. According to the Anticybersquatting Consumer Protection Act (ACPA) enacted in 1999, a cause of action was established for registering, trafficking in, or using a domain name confusingly similar to, or dilutive of, a trademark or personal name.

While cybersquatting is illegal, it is also difficult to prove. “Bad faith” is not something easily defined, much less proven in court. To prove intent, both direct and circumstantial evidence are used to prove or disprove a case. Direct evidence may include things like emails or recordings of conversations. Circumstantial evidence is more like connecting the dots to arrive at a logical conclusion.

It comes down to the cost-benefit ratio of – is the minimal fine worth the possible damage that can be done to a political opponent? Unfortunately, the answer is all too often, yes. In today’s political environment, dirty or even illegal methods are the norm rather than the exception.

On October 10, 2019, conservative firebrand activist and host on Raging Elephants Radio, Apostle Claver Kamau-Imani, announced the formation of an exploratory committee for a possible run for a seat in the Texas House in HD-138.* On the very next day the domain names apostleclaver.com and claverfortexas.com were purchased under the registrant name of Walter Burke. 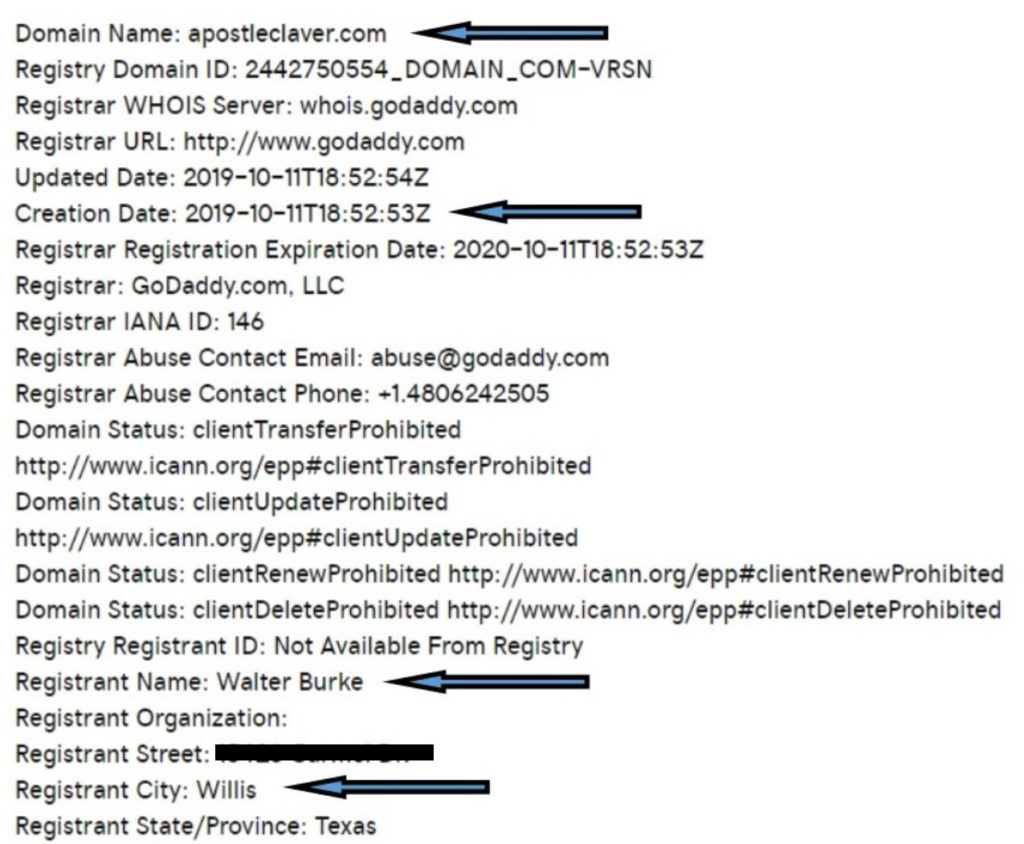 What business could Walter Burke possibly have in store for the ApostleClaver.com domain? A quick search on his Facebook page revealed that he “Likes” the Lacey Hull for Texas campaign. Lacey Hull is a candidate running against Apostle Claver for the Republican nomination for the Texas House seat in District 138. Coincidence? Another strange development is that Burke’s Facebook page has now gone missing from searches after he was contacted with requests for comment. Fortunately, we captured the below screenshot before the page was taken down. 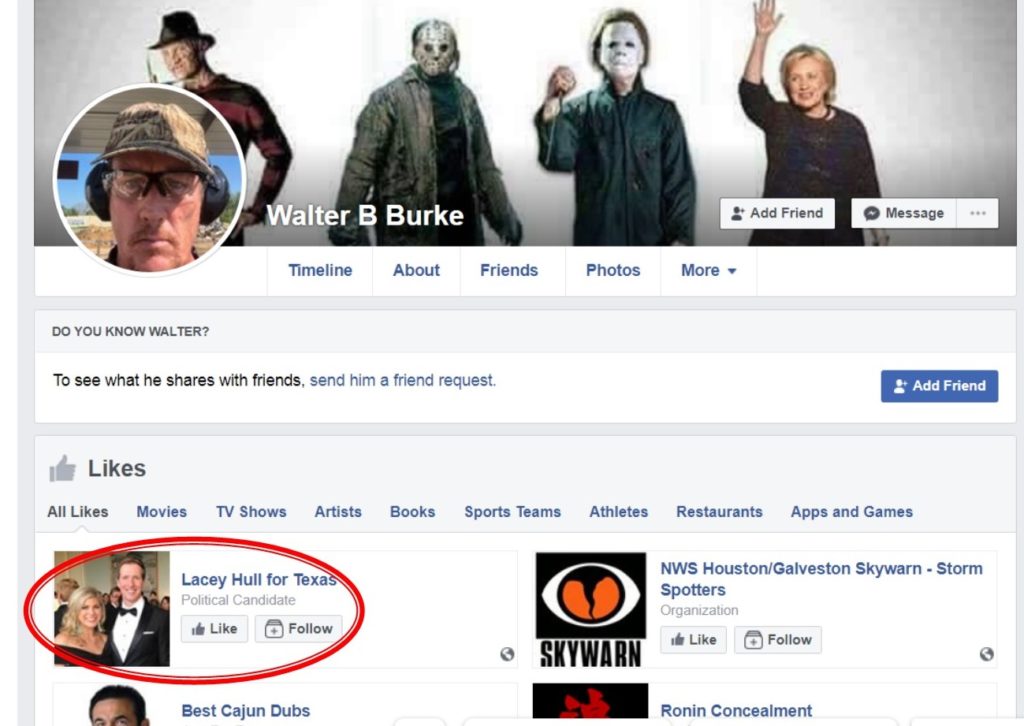 Under U.S. Code § 8131, it is unlawful to register a domain name that consists of, or is similar to, the name of another living person without their consent. Apostle Claver Kamau-Imani has confirmed that his consent was not given for the purchase of ApostleClaver.com.

If Burke was not acting on his own, did those who directed him to take this course of action inform him of the legal ramifications of his actions?

One final question for Mr. Burke, if you have nothing to hide, why was your Facebook page taken offline?

As of the publication of this article, Walter Burke has not responded to multiple requests for comment.

According to the National Journal, Rand Paul paid $100,000 for RandPaul.com just days before announcing his presidential bid in 2015. It is rumored that Paul’s campaign felt it was more expedient to pay the ‘ransom’ than to pursue litigation because of the time involved.

Also during the primaries for the Republican nomination for president in 2015, TedCruz.com was a website praising President Obama.

“It’s a routine campaign practice to purchase URLs to stop bad actors from getting them,” according to Lauren Passalacqua, communications director at the DSCC.

To further demonstrate that this happens on both sides of the isle, in 2014, it was revealed that the Republican Party’s congressional campaign wing had created 18 fake websites for Democrats. Paul S. Ryan, a senior counsel at the Campaign Legal Center pointed out that the sites also violated FEC regulations. The rule prohibits non-candidate committees from using a candidate’s name in headlines, titles and letterheads unless the use demonstrates clear opposition to the candidate. It was discovered that Democrats who donated on the sites were actually donating to the RNC.

Cybersquatting has made a lot of people a lot of money and also made things difficult for politicians and their political campaigns. Is it legal? No, but it is difficult to prove ‘bad faith’ intent. Is it dirty politics? Without a doubt. The damage that can be done to a candidate far outweighs the minimal fines that may be imposed.

Does this prove that the Lacey Hull for Texas campaign had anything to do with the purchase of domains related to Apostle Claver’s campaign? Nope – the ties to the Lacey Hull campaign are merely circumstantial evidence at this point.

Can Mr. Burke be facing civil litigation? No doubt about it.

Some probably consider the tactic of cybersquatting “business as usual”, but it also reflects on the character of those who would condone such tactics. Some would also probably consider it a rookie mistake on the part of Apostle Claver Kamau-Imani for not protecting himself from those of dubious character. All is fair in love and politics? For some, apparently.

* Full disclosure – TEAParty911.com founder, Michael Kinzie is a member of that committee.