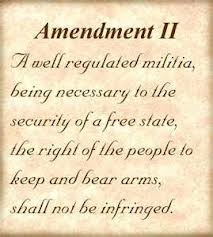 Though rarely described as such, the Second Amendment is the American’s people most important check and balance.  We were taught in school that our government has three separate and distinct branches which share power and by design check and balance each other so none can become all powerful.  These are the executive, judicial, and legislative branches and though we’re discouraged from contemplating it, all three are highly susceptible to political pressures.

If for example a president can “stack the court” with appointments and win control of both houses of congress, he has carte blanche to advance whatever agenda he wants.  The Second Amendment which guarantees our right to bear arms is the un-named but most essential check and balance because it’s the only one with teeth and without it government power is completely unrestrained.

The Second Amendment reads, “A well regulated militia being necessary to the security of a free state, the right of the people to keep and bear arms shall not be infringed.”  This is construed by some to mean the people had the right to own a musket to defend their families, hunt for food and fight foreign invaders, but that was not the founding fathers intent.  If the words “security of a free state”, are interpreted as meaning free individual states as I believe they should be, it becomes apparent that our forefathers intended the United States to be a confederation of sovereign states and not a single super state.

The thirteen colonies were originally independent of each other and arguably wished to maintain a high degree of autonomy.  They didn’t expect to be subjected to the absolute power of a new national government any more than they intended to be the subjects of an English king.  In order to maintain “states’ rights” they needed their own militias which gave them a fighting chance to stand up to the new central government.  The concept of state’s rights was a powerful position until squashed first by the Civil War which revoked the sovereign states right to secede from the union and in recent times individual states have lost most of their remaining rights to the federal government.

A pundit argued that the founding fathers couldn’t have imagined assault rifles and wouldn’t have wanted Americans to own anything more lethal than muskets.  He failed to note that the colonial national government also was armed with muskets.  Sovereign states that wanted to maintain a significant degree of self-rule could therefore raise militias that had a chance of success because they had arms that were roughly comparable to central government.  Assault rifles don’t make citizens on par with the U.S. military but their availability still makes many politicians and social engineers nervous and not just because of horrendous mass shootings.

The anti-Second Amendment lobby claims that the only legitimate means of advancing an opposing position is via the vote, lobbyists and the political process.  They insist that any other method is illegitimate and illegal, which meshes nicely with their disarm the people agenda.  They are incredulous that sane people would oppose actions taken by our all mighty, benevolent government and when pressed they point out that “resistance is futile.”  I prefer the position of our forefathers, that resistance was preferable to subjugation by those intent on imposing their will on the colonies.  Then as now, whether dominated by left wing nannies or right wing big brothers, the government will trample on the rights of people who cannot defend themselves!

Ken O. Eldib’s a Jersey native, Indiana resident, graduate of Oklahoma State Univ. and founder of the Society for the Rational Study of Religion.  He’s the president of Global Trade Consulting Co. which provides industrial market research to companies.  His opinions result from visiting and living in a number of states and regions and travelling the world.   Ken’s been writing since 1999 when he published his personal bestseller Vows 2000.   The author has had dozens of articles published and has written a number of books including his most recent, Criticizing Ben published in 2013.  Ken’s next book titled 4 Men in their 50’s is slated for publication in 2014.

The authors hobbies include; photography, metal working, shooting and other outdoor activities.  Ken and his wife relax in Brown County, Indiana and enjoy visiting friends and relatives all across the country.