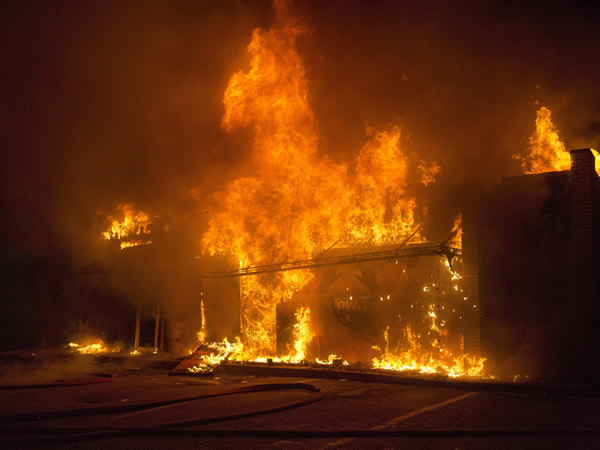 When the progressive welfare state goes broke, some large African-American neighborhoods in Big Blue Cities will be left to burn by the police.

On the morning after the Grand Jury No True Bill decision was announcement, it was clear that the policing authorities followed a planned, minimum-response strategy. They offered little resistance to looting and property destruction, perhaps in order to avoid bloodshed and media scrutiny.

The African-American communities in the Big Blue Cities should note the absence of law enforcement in Ferguson the night after the Grand Jury decision.  When the welfare state begins to dial-down, and the value of EBT cards atrophy, some of those neighborhoods will burn at the hands of their own thug-teens.  And policing authorizes will either be unwilling, or unable, to confront the lawlessness.

The trauma may not be triggered by a gradual decrease in financial assistance – that’s a slow boiling frog.

And, it may not even come in the wake of another lethal confrontation between a citizen and a police officer.

It could be triggered by a non-African American, inner-city convenience store owner – like the clerk that Brown ruffed up before he died – who, after being robbed twice in two months, decides he’s had enough and grabs the gun under the counter and shoots two thieves to death.

We’ve seen inner city intifadas before, and the inability of law enforcement to stop widespread law-breaking – for example, after the assassination of Martin Luther King and the Rodney King jury decision.

But the destructive scene has yet to be prompted – if not exacerbated – by a decline in government assistance in those communities. That is coming.

Meanwhile, the well-established, well-funded, social-activist organizations, many that have been active in Ferguson for months, hope to use Ferguson as a catapult to a sustained, new, civil rights movement.  They are professional, crisis ambulance-chasers.  The Ferguson looters are their cannon fodder.  Wilding is a just one means to their social-transformation end.

While interviewing an attorney who is employed by one of the well-funded organizations and is working full-time in Ferguson, the attorney volunteered a legal opinion that there was absolutely no cause to indict Officer Wilson, because he had acted well within accepted police procedure.

This was two weeks before the morning after the Ferguson Grand Jury decision.