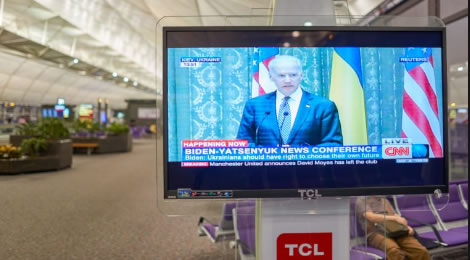 The International Association of Mental Health Researchers (IAMHR), headquartered in Paris, France, has issued a global alert to the dangers of second-hand exposure to CNN televised news broadcasts found in many of the world’s major airports.

Dr. Marcel Loufoque, Acting Managing Director of the IAMHR, recently stated at a convention of Mental Health professionals from across the U.S. and Europe, that the organization’s researchers have determined that indirect exposure to CNN News broadcasts in the waiting areas of many major airports damages the mental health of persons seated nearby the television, even though most do not actually watch the broadcasts.

Dr. Loufoque told his audience of mental health professionals that, “You don’t have to be actually looking at the silent broadcasts of CNN News programs, while you await boarding of your flight, to suffer moderate damage to your mental capacities. Just an occasional glance at the TV sets is enough to have a negative impact on your cognitive faculties.”

According to the DailyCaller.com, “One reason airports are happy to retain CNN is the cash it’s willing to shell out. Public documents indicate CNN offered the Miami-Dade International Airport $150,000 annually for its most recent contract, which will expire in 2024. Documents obtained by The Atlanta Journal-Constitution indicated CNN is paying $225,000 each year for rights to the airport in Atlanta, where CNN is headquartered. It also provides LCD monitors, as well as the equipment to install them.”

Unlike the newspaper USA Today that ground travelers are sometimes offered for free at the front desk of the hotels where they stay, though few guests pick up a copy unless they’re traveling with small birds where the paper fits at the bottom of cages, CNN International makes money  from their presence in airports, despite the fact with the volume turned down, only travelers with lip-reading capability can follow the broadcasts.  Dr. Loufoque warned that these persons – who read lips – a particularly susceptible to adverse effects from both watching and hearing CNN News.