BLM demands image of slave trader be removed from SCOTUS

Washington, DC: A leadership delegation from the group Black Lives Matter (BLM) submitted a petition, in person, to the Office of the Honorable John Glover Roberts Jr., Chief Justice of the United States Supreme Court, on Friday, July 2, 2020.

The petition calls upon Roberts to order the removal of the depiction of Mohammad (above center with sword) from the bas-relief sculpture by Adolf A. Weinman that, on the north wall of the Court Building, includes portrayals of Napoleon Bonaparte, John Marshall, William Blackstone, Hugo Grotius, Louis IX, King John, Charlemagne, Justinian and Mohammad.

In the petition, BLM leaders, quoting, in part, from a British Broadcasting Company (BBC) article, state that:

“History undeniably records that Mohammad bought, sold, captured, and owned slaves, which may explain why slavery persisted until the 19th century in many places (and later still in some countries). The impetus for the abolition of slavery came largely from colonial powers.”

The petition demands that the image of Mohammad be replaced by the image of Thurgood Marshall, the first African American to sit on the SCOTUS.

A spokesperson for the Chief Justice was unavailable for comment. 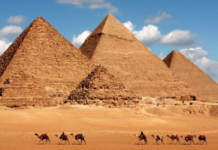