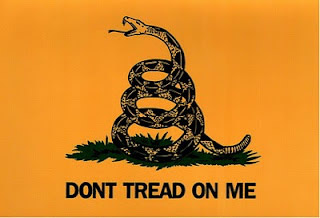 The Tea Party and other grass roots organizations have done much in these last few years but I think it is necessary that they now do even more. They have awakened the country to the impending economic collapse of our country and elected many fiscally conservative representatives in federal and state offices and that will slow the economic destruction of our country and prevent it in many states. This is necessary but it has not been sufficient to protect the liberty of the people from the unconstitutional usurpation of state power by the Federal Government. The Tea Party principle of constitutional government should allow an expansion of activity to address this problem.

Our individual liberty and freedom of action are in peril. The Federal Government including the Supreme Court is populated by many who do not respect the constitution as written and it is not obvious this is going to change for the better anytime soon. State sovereignty granted to the states in the constitution has disappeared and along with it any protection from the Federal Government for the citizens of the states.

For 100 years progressives have been creating the mechanism to override state sovereignty and to control our lives by amending the constitution, and passing unconstitutional laws that were approved by the Supreme Court. These decisions are now case law and that often decides future cases, not the constitution. Today Congress takes advantage of this by passing laws giving almost any power to the Federal Government whether allowed by the constitution or not. The federal courts then citing established case law or using their own liberal interpretation of the constitution support this expansion of federal power. As state sovereignty disappeared so did the liberty and freedom of their citizens.

What is required is a firewall between us and the Federal Government that will protect us from overreaching and unconstitutional regulations and laws. Two recent examples of laws that fit that description are Obamacare and the National Defense Authorization Act (NDAA) that has given the president the authority to arrest and detain American citizens without trial or due process, a clear violation of the constitution. There are probably more such laws in the works likely including unconstitutional gun control laws.

This firewall can be provided by state legislatures through the process of state nullification where laws or state constitutional amendments are passed that have the effect of voiding federal laws deemed unconstitutional by the state. This is not a new idea for it was used effectively by Northern States prior to the civil war to protect run away slaves from Federal laws requiring their return to owners. The process was also used to no affect in a less moral situation when the Arkansas legislature attempted to maintain school segregation by nullifying federal laws against it. This unfortunately resulted in the Supreme Court declaring that states could not nullify federal laws. Therefore members of state legislatures pursuing this approach to protect their citizens will have to be courageous individuals and they will need overwhelming public support. Challenging federal authority is not to be taken lightly since doing so will have a degree of personal risk for the state officials that actively engage in protecting our rights.

What I would ask the nations Tea Parties and grass roots organizations to do is to actively support these state sovereignty initiatives where they exist and help create them where they do not yet exist. State sovereignty initiatives are challenges to federal authority over state authority and the justification for the challenge rests in the sovereignty granted to the states by the constitution when ratified by the states. Federal laws that are not constitutional, that is do not agree with the objectives and understanding of the constitution when written and ratified, must not be enforced.

If these initiatives are to be executed by our representatives the concept of state sovereignty must have overwhelming public support and they must know we care. And that is where we come in. We can show we care if every contact with a public state official includes an inquiry into his or her support for state sovereignty initiatives. If running for office what are they willing to do and if in office what have they done. Specifically will they support legislation to protect us from Obamacare and the NDAA provisions? Every article written by one of us related to a public state official should mention their support or lack of support for these initiatives. Also articles aimed at a conservative audience should support these initiatives when appropriate

Several states have passed laws nullifying Obamacare and the NDAA law but many states including Texas have not. With the next legislative session beginning after the first of the year passing nullifying legislation should be one of our priorities. These nullifying actions will be effective even in light of Supreme Court objections if many states are united in protecting their sovereignty and that of their citizens.

It is my belief that media bias and thuggery by Democratic operatives will prevent the election of a national constitutional government anytime soon. Worse, time is not on our side since the increasing number of traditional Democrats through lack of meaningful immigration laws and enforcement, the increasing number of people on government handout by design and economic stagnation, and the increasing number of our children educated by the socialist teachers union will soon become the dominant electorate.. Are we willing to change our principles in order to to please the media and the changing demographics? Are we going to support abortion on demand, illegal immigration, gay marriage, higher taxes on small businesses, increased environmental regulations in the name of climate change, Obamacare, massive reductions in the military. I’m not, but based on the last election, if we don’t we may not have a constitutional government for some time.

So while the Federal Government spins out of our control we must take this opportunity to strengthen our State Governments. They may be our last and only line of defense but it will take us, through our public support, to ensure they meet this challenge. If we do not act soon and they do not respond then I fear the eventual consequences will be tyranny and subjugation.