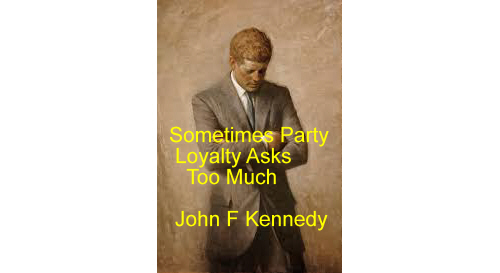 When Tywin Lannister asked Arya Stark “what killed your father” she replied “loyalty”. Tywin and Arya are two of the main characters in the HBO series “Game of Thrones”. Arya’s father was second in command to a king in the fictitious country of Westeros. When the king died his illegitimate son grabbed the throne. Because of loyalty to the dead king and the king’s legitimate heir her father denounced the new king which was followed shortly by him losing his head.

Loyalty we believe is admirable in a dog but as the writers of this fictitious drama made clear, in governing, loyalty among politicians can have fatal consequences. Now unfortunately that scenario is playing out in real life but instead of politicians dying, it is our country facing the dire consequences.

One of the most famous Federalist Papers is number 10 written by James Madison. Justices Black, Burger and Rehnquist have all cited this paper more than once in their decisions because in that paper Madison describes why we have a Republic and not a Democracy.

Madison dismisses Democracies because we know from history they quickly begin to trample on the rights of minorities and “Hence it is, that such Democracies have ever been spectacles of turbulence and contention; have ever been found incompatible with personal security, or the rights of property; and have in general been short in their lives, as they have been violent in their deaths”.

He defines a “faction” as “a number of citizens who are united and actuated by some common impulse of passion or of interest, adverse to the rights of other citizens, or to the permanent and aggregate interests of the community”. The key phrase is “adverse to the rights of other citizens”. He was not concerned about a faction containing a majority of the population unless that faction desired the suppression of some liberties of the minority.

The Republic, a representative form of government, was designed to protect the citizens from the dangers posed by factions. Each Representative was to represent and be chosen by a population of originally about thirty thousand. The larger the country in population and geographical extent the more diverse would be the passions and interest of the people. Their elected officials in the Houses of Congress defending the constituent’s passions and interest would prevent factions from specific areas or with common beliefs from passing national laws favoring the faction if they were detrimental to the aggregate interests of the community

But to defeat the actions of a faction at the federal level requires loyalty between the elected officials and those they represent. Today that loyalty has been replaced by loyalty to the political party and that defeats the entire concept of our Constitutional Republican Government. Obamacare legislation for example became law because every member of one political party voted for it while every member of the opposing party voted against it. It must be clear that without the requirement for voting as the party commands that oppressive and flawed legislation would not have become law.

The Houses of Congress are worse than pure democracies, they are oligarchies where a few, the party leaders, dictate what the other members will support. Today the majority party because of the loyalty to the party by their elected members can and does trample on the rights of those with other opinions. It is becoming even worse because the party supposedly representing opposing views copies the views of the majority party in an attempt to reclaim some political power. The result is that opposing views have no possibility of ever being considered at the national level.

We have, to incorrectly quote Lincoln, a government of the people, by the people and for the party.

Realistically we are stuck with the parties and the consequences to follow and indeed we are seeing the beginnings of the “spectacles of turbulence and contention” that Madison predicted will follow rule by government other than a representative form of government.. The formation of the Tea Party was in direct response to Obamacare and huge spending bills passed by party loyalty voting. Tea Party elected representatives, however, are a sign of hope for they have a loyalty to the constituents that elected them and not to the Political Party.

In addition to the contention demonstrated by the formation of the Tea Party there is a conservative run state-by-state effort to allow states to regain some lost sovereignty. This effort focuses on the doctrine of anti-commandeering, a court sanctioned doctrine, that prevents the federal government from forcing a state to use its resources, including state officials, to execute federal laws or regulations. Efforts are current in many states to have the state legislatures pass laws blocking the use of any state resources to support federal laws like Obamacare, or federal gun control laws, or those that allow the use of drones, or NSA surveillance, or the use of NSA data, among other oppressive federal laws. Unfortunately we are seeing the Republican Party establishment fighting some of these efforts as they fight Tea Party interests.

Those are not the only “spectacles of turbulence and contention”. Actual and serious secession movements are taking place in CA and CO where parts of the states that lack effective representation in their capitals desire to form independent states. Any success there and many other regions with similar issues will join the movement.

Also there is a growing effort to call a Convention of States (COS) to amend the Constitution to require fiscal responsibility in the federal government and to reduce their usurped powers.

The federal government seems to be preparing for a war against its citizens, the ultimate spectacle of turbulence and contention.. They have bought huge supplies of anti-personnel weapons and armored vehicles for use in the United States. Government troops of one form or another routinely practice assaults on local towns. The military once thought of as protectors of the citizens from their government and others has had their leadership replaced by the administration. Police are becoming more militarized every day. And there is no justification given for any of this, so whom are they preparing to destroy and why?

Do I blame party loyalty for the possibility of dire national consequences from the loss of representation and the resulting increasing “spectacles of turbulence and contention”? I do. There have been political parties for most of our history but it is relatively new that the progressive notion that government should control every aspect of our lives has become the objective of the party in power. I believe this radical view belongs to a small faction and would be defeated if elected party members had the courage to represent the interests of their constituents rather than their party leaders.