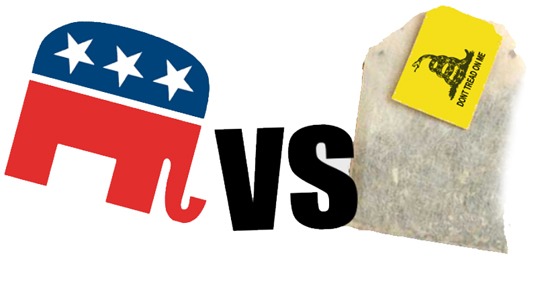 Series Abstract: Karl Rove’s targeting of Michigan Congressman Justin Amash as “the most liberal Republican” in Congress signals the GOP Establishment’s plan to cull out the most conservative Republican office-holders from the GOP herd. The bipartisan nature of that effort is illustrated in the Democrat funding behind the (Republican) Main Street led by former nine-term Republican Congressman Steve LaTourette.

On October 7, 2013, the Washington Post predicted the challenger’s arrival in an article entitled “Some tea party congressmen see political backlash at home” by Philip Rucker.

“[W]ithin Grand Rapids’ powerful business establishment, patience is running low with Amash’s ideological agenda and tactics. Some business leaders are recruiting a Republican primary challenger who they hope will serve the old-fashioned way — by working the inside game and playing nice to gain influence and solve problems for the district. They are tired of tea party governance, as exemplified by the budget fight that led to the shutdown and threatens a first-ever U.S. credit default…Some prominent business leaders are lining up behind investment manager Brian Ellis, according to several GOP operatives here.”

Rucker quoted Meg Goebel, President of the Paul Goebel (insurance) Group, as being “‘really, really unhappy’ with the leading role Amash has played in tying the health-care law to overall government funding. ‘I don’t see him as a collaborator, and I think that’s a huge problem,’ Goebel, a former chair of the Grand Rapids Chamber of Commerce, said. ‘People used to say, ‘I don’t like the Congress, but I like my congressman.’ I don’t think that’s the case anymore.’”

A search of the Federal Elections Commission individual contribution data lists three political contributions made by Goebel. Two came in 2004-2005 and were made to the DNC Services Corporation/Democratic National Committee for a total of $1,000; one was made in 2005 to the Michigan Democrat State Central Committee for $475. Goebel is not a disinterested commentator.

Rucker quoted Katie Pager Gage, “a former senior aide to Romney and a Michigan GOP operative” who said, “The business community in Grand Rapids has been completely disenchanted with Amash.”

But, Douglas DeVos, president of Amway and son of the company’s founder, and Dave Mehney, Chief Executive of Skytron, a medical equipment manufacturer, discredit Gage’s categorical assertion with their public support for Amash.

Rucker also quoted Steve LaTourette, CEO of the Main Street Partnership (see Part II): “LaTourette said some Wall Street donors called him after reading reports of a possible primary challenge to Amash and said they were ‘ready to go.’ LaTourette noted that, before Amash, the district was represented by moderate Republican Vernon Ehlers, a former nuclear physicist. ‘It’s not bad ground for the center-right of the party, the governing wing of the party, to stake out its claim,’ he said.” (There’s the “governing wing” meme, again.)

On October 13, 2013, Brian Ellis, President of Brooktree Capital Management in Grand Rapids, officially declared his candidacy for the Michigan 3rd Dist. Seat. He’ll face-off against Amash in the GOP Primary Election on August 5, 2014.

Ellis’ Federal Elections Commission (FEC) history of campaign donations displays his consistently loyal financial support for former Indiana Senator Richard Lugar from 2004-2010 ($4,000 total). Lugar was a U.S. Senator from 1977 until 2013 when he was defeated in 2012 in a primary challenge by Indiana State Treasurer Richard Mourdock, who was supported by the Tea Party.

Mourdock, one of LaTourette’s “Manchurian candidates,” lost in the 2012 general election to the Democrat candidate, Joe Donnelly.

About one week after Ellis announced his candidacy, seven prominent members of the Western Michigan business community released a public letter, on Ellis’ campaign stationary, endorsing his candidacy. Here is a copy of that letter.

When, in 2012, Hoekstra ran against now Democrat U.S. Senator Debbie Stabenow for a seat in the Senate representing Michigan, Potter donated $4,700 to Stabenow’s campaign. Stabenow won.

In 2009-2013, Potter generally shifted away from supporting individual candidates ($12,450 to Republicans; 9,350 to Democrats in this second period) toward making large donations to the Michigan Republican Party (MRP). According to FEC records, Potter gave $55,000 to the MRP from 2009-2012.

Potter’s single largest campaign contribution to a candidate – $6,800 – went to Michigan Democrat Congressman Gary Peters (2009-2013). On the issue of abortion, Planned Parenthood and NARAL Pro-Choice America have given Peters a 100% positive rating. In 2009, during his first-term in the House, Peters voted for every major Democrat initiative, including the Recovery Act, Affordable Care Act, the American Clean Energy and Security Act, and the DREAM Act.

Peters is the Michigan Democrat Party’s candidate for the U.S. Senate in 2014.

A year earlier, on May 20, 2012, Potter gave $1,000 (opensecrets.org) to Terri Lynn Land’s effort to become a member of the Republican National Committee.

Land is Peters’ opponent in the race for the Michigan Senate in the 2014 general election.

A History of Community Involvement

Potter’s history of community involvement is both extensive and impressive in depth and range.

“In 2008, Marge [Potter] was awarded the Grand Rapids Area Chamber of Commerce’s annual ATHENA Award. In February 2010, Marge was honored by the Grand Rapids Business Journal as one of “The 50 Most Influential Women in West Michigan.” And in April 2010, she was honored by the Michigan Women’s Foundation as a Women of Achievement and Courage.” (Source)

Potter was on the 2012 Board of Directors, along with two other signatories to the letter, of the West Michigan Policy Forum – “the premier business event of the year [that] included national, state, and regional through leaders and experts speaking on topics important to the Michigan business community.”

In 2013, Potter served on the Michigan Women’s Foundation Board of Trustees. She also served on the organization’s 2008 Board of Directors, and on its Candidate and Fund Development Committee.

Potter has also served on the Board of Directors (2008) of the Progressive Women’s Alliance of West Michigan (PWA).

“Over a decade ago, a group of women in West Michigan, who were interested in politics and distressed by the lack of progressive policies both nationally and state-wide, met to talk about what they could do to challenge the status quo. From this initial meeting, the Progressive Women’s Alliance of West Michigan (PWA) was born. PWA is a Political Action Committee (PAC) formed to promote, support and fund progressive candidates and causes throughout the nation but primarily in Michigan. In the past ten years, PWA has raised and contributed over $300,000 to PWA-endorsed candidates and initiatives. In 2012, 17 of the 18 candidates endorsed by PWA won their campaigns. This is a far higher success rate than those of the super PACs funded by Karl Rove, Sheldon Adelson and the Koch brothers.”

In 2012, the PWA only endorsed Democrat candidates.

According to a November 26, 2013 article in Crain’s Detroit Journal, when asked, Potter “declined to disclose the financing plan, but did say the required Presidential Permit will be sought from the U.S. Department of State next year. She also said a plan is in place that will have the funding in place early next year. It could be a mix of government and private money. ‘We are getting our financing in very good shape right now,’ she said.”

The estimated cost for the new tunnel is $400,000,000. Crain’s noted that “Right now, the project still lacks half its estimated funding needs and some of its regulatory approvals.”

“To go along with this project the Detroit Intermodal Freight Terminal is in midst of a $650 million upgrade. This terminal is used by four major rail companies in the area (Canadian National, Canadian Pacific, CSX and Norfolk Southern), and is a competitive advantage compared to the Chicago area where the rail companies are much more spread out.”

Meanwhile, a website that chronicles Canada’s top 100 projects states that:

“The current plan is to raise $200 million from coalition members and $200 million from government sources in each country. The precise financing structure has not been set… The project is expected to add momentum for other transportation infrastructure improvements, such as a planned Detroit Intermodal Freight Terminal, a public-private partnership between Class 1 railroads and the State of Michigan.”

To date, there’s been no public commitment by the State of Michigan or the U.S. Federal Government to fund the Continental Rail Gateway project.

So, here are some of the dots:

Lastly, here are the salient points from my phone conversation with Brian Ellis on February 19, 2014, 2:50 pm:

When asked, whether or not, to his knowledge, any of the seven persons who signed the October 2013 Letter of Endorsement for his candidacy are pro-abortion, Ellis said he did not know of any. But it didn’t matter if any do, because, he said, only his position matters.

When asked if he had a position on the Continental Rail Gateway project, he said he had not heard of it.

When told that he could learn about it from one of the signers of his Letter of Endorsement intimately involved in the project, he remembered it, and said that he had no position on the project.