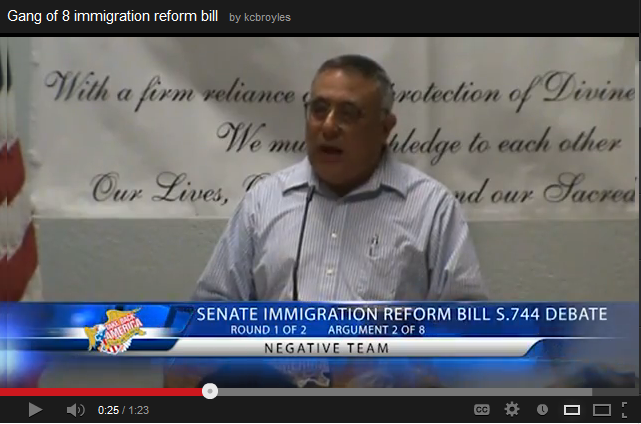 The US Senate has been called the “world’s greatest deliberative body”. George Washington once said that the founders created the Senate to cool House legislation just as a saucer was used to “cool hot tea”. Well, George was right, the Senate is certainly trying to “cool the hot Tea Parties” over the issue of immigration reform and border control. According to Madison, the “great anchor” of Government was to be a “necessary fence against the “fickleness and passion” that tended to sway House members and the general public.

Unfortunately, today’s modern Senate is neither “deliberate” nor a “fence” with regards to the great issues of our time. In fact, this Senate has been acting more like children rather than the mature seasoned legislators they profess to be. Instead of addressing the issue with the American people, instead of working within the appropriate committees and regular order, today’s Senate has devolved to a Gang of Six, a Gang of Eight or a Gang of some other grouping to craft legislation that can be forced through the controlling political parties bypassing our traditional legislative processes.

With this in mind, Senator Marco Rubio and the “Gang of Eight” have submitted a proposed 844 page immigration reform bill to the United States Senate. The bill proposes to provide more effective border security, crack down on employers who would hire migrants here illegally, enact improvements to the legal immigration system, and create a pathway to citizenship for millions of illegal aliens currently residing in the United States. Those that support this legislation claim that it is a matter of civil rights and that it is time that the Republican Party deals with the illegal immigration issue once and for all. Opponents of the bill claim this is an amnesty bill and will not solve our country’s immigration problems, and will exasperate our budgetary fiasco. So who is right?

So far, all of the argument has been on the Republican side with the Democrats playing a much lower key game with respect to the public debate. Consequently, many in the conservative grassroots seem to be lining up against the legislation, while many more established Republicans are advocating their support for the reforms outlined in the bill. Therefore, the Clear Lake Tea Party (CLTP) decided to host a debate that allowed both Republican grassroots views of the proposed legislation to be debated in a local public forum.

In order to avoid stacked panels where the loudest or slickest panelist can win the day, the CLTP chose a team policy debate format, the most popular debate format practiced in American high schools. The two debate teams gave a series of constructive and rebuttal arguments both for and against the Senate bill. During the debate (https://www.youtube.com/playlist?list=PLae45UjYOfL2NpLZjzvH6tvACyCK1JmIM), both teams gave a spirited and passionate defense of their positions. Unlike many discussions on this issue, each team remained civil and respectful, as did the audience.

In conclusion, it can be determined that there is very little room to change people’s positions regarding support for or against the Senate immigration reform bill. Before Republican leaders act, they better have a sure understanding of their base’s stance on the legislation. The final conclusion is that the people demand a role in deciding policy in this country. They are eager for town halls and debates. They do not want to be bystanders in their own country. They are tired of having policy that skirts the “rule of law” or changes American culture and is then crammed down their throats. They want this debate among themselves and with their elected leaders. As Texans, we will continue this debate even if our leaders continue to work behind closed doors.