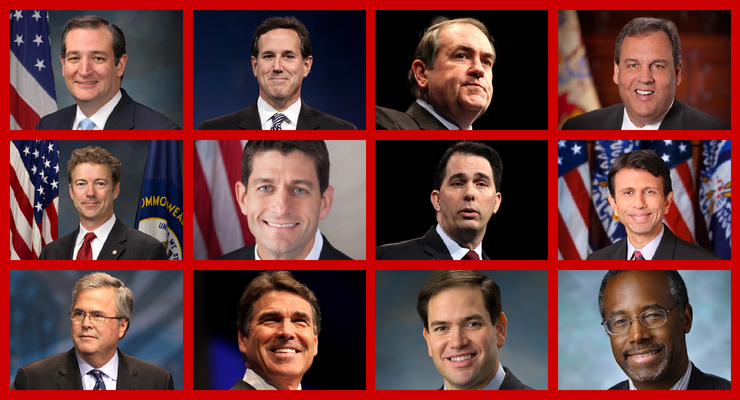 “News” outlets have been politically biased since, at least, the days when Jefferson was Secretary of State.

The biggest difference today is that there are many more, and ever more, “news” outlets. And most of the dominant ones are firmly aligned with the liberal progressive movement underway in the U.S. since, at least, the late 19th Century.

The good news is that readers, in growing numbers, are learning how to filter out the hard news from among the spin-and-glitter of biased reporting.

There is no clearer impact of journalistic spin these days than the shilling now underway for moderate GOP candidates in 2016.  The spinning is certain to accelerate into high gear as next spring approaches.

On the slim chance you don’t have a playbill to filter the news that’ll be coming out through the various “news” outlets, here are a few profiles:

The Washington Post (WaPo), New York Times, Huffington Post (HuffPo), and POLITICO.com are the marquee stars of the liberal media.  Most will, of course, deny it.  But it’s true nonetheless.

None are partial to the Tea Party (TP) movement.  In fact, all have been instrumental in casting the TP as aging, angry, rightwing extremists. That doesn’t mean these, and other progressive outlets, never have nice things to say about Republicans. They sometimes do.

It means they differentiate between Republicans and TP people.

The Left media is already advancing Republicans they want representing the GOP in the ’16 general election. Today, they’re focused on Mitt Romney and Jeb Bush.  Should one or both of them fade, or back-off by declaring definitively that they’re not candidates, there are other “moderate” (read “Establishment”) Republicans on the bench: Christy, Ryan and Kasich are available – others will surface.

The liberal media will advance the campaign cause of any candidate(s) they think can lose against whomever the Democrats stand-up in ’16.

The Washington Examiner and the Washington Times are shills for the Republican Establishment, particularly the GOP donor class.

As the 2016 elections move closer by the month, you’ll probably see them push the same GOP candidates that the “Recognized Liberal Outlets” promote.  It’s not a conspiracy – it’s a matter of matching self-interests from different directions.

The liberal media wants a “moderate” Republican in ’16 to enhance the Democrat candidate’s chances of victory.  They know that if the GOP runs a McRomney in ’16 many more than the estimated 4,000,000 conservative voters who stayed home on Election Day in 2012 will sit out 2016. (The question is: Would the GOP Establishment rather lose the 2016 POTUS than have a GOP conservative win?)

On the flip side, the GOP Establishment media wants another McRomney to run in ’16, in part, to marginalize the conservatives in the party and drive a final nail into the TP coffin.

Concerning the tube news (TV) outlets, FOX has long been seen as the sole voice of conservatives.  But that’s not as true as it once was.  FOX is gradually shifting to “moderate” (as in “fair and balanced”) in order to attract viewers away from the three-letter acronym (TLA) news outlets (ABC, CNN, NBC, etc.).  The shift began a few years ago when FOX began hiring former TLA broadcasters to work on the FOX farm.

The lead commentators today on the nightly FOX News Special Report are George Will and Charles Krauthammer. Both generally represent the GOP Establishment position – Krauthammer in particular.

The good news in all of this is the DRUDGE REPORT.  Matt Drudge changed the entire news landscape.  In the last 12 months, the site has received nearly 9.4 billion visits!

FOX’s motto is “We report – You decide.”  Problem is, much of their “reporting” features dueling, 20-something, talking heads yelling over each in redundant, fatiguing debates that go nowhere.  Verbal food fights.

DRUDGE has no motto. But it could be “The options are here – read what you want.”

The Left’s media harbors strong negative feelings toward the DRUDGE REPORT. The GOP Establishment is largely silent. They’re all envious of Drudge’s influence on the news cycle.

For now, neither be encouraged, nor discouraged, by the daily poll results. Means next to nothing this far out from November 2016.  Much can and will change ahead.