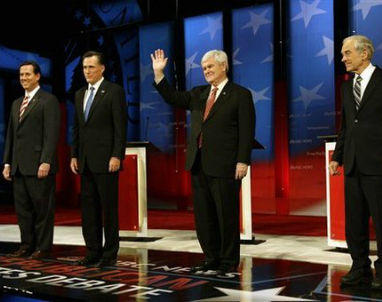 5) Some people suggest there will be a battle going on between the Tea Party and establishment Republicans for control of the party and that it might spill out through this race – the U.S. Senate race. What do you think about that? “Some people” are correct. We have certain individuals, we call RINO’s [Republicans in name only], that can be more of an obstacle to constitutional government than a liberal Democrat. To this end, we hope to be successful in removing Texas House Speaker Joe Straus from his speakership and from office. The tea parties have some success in this area: the ousting of the former inhabitant of TX 17 US Rep seat, Chet Edwards. In addition, Tea Party actions effected a dramatic change in the makeup of the Texas legislature in Nov 2010 and we are going to continue to build on this strong 2010 surge in 2012 as well.

6) Is this election about getting the most conservative candidate from Texas into the Senate? Yes… conservative, as defined by the U.S. Constitution. A “neo conservative” candidate is still unacceptable.

7) Do you think the candidates will be vying for the Tea Party vote? Why or why not? Yes. We will continue to be a force in the primaries and the general election. Most candidates know and respect that and would like our support. Many eagerly speak to tea party or other conservative groups across Texas.

8) Are they asking to come speak to your group or to others? Obviously, the U.S. Senate race involves all of Texas and we respect the needs of candidates to choose their speaking venues carefully and judiciously to get the best bang for their bucks and time. One of our tea party’s missions is to educate citizens about local and state candidates. Any candidate is welcome to speak to our group. Ted Cruz came and spoke to a good crowd at our December meeting and we know he and other candidates are eager to get some visibility with Texas tea party groups. On the flipside, tea party leaders, like myself and others, have been asked to speak to business and political organizations, as well.

9) How influential do you think the Tea Party vote will be in this race? The tea party groups are psyched and will continue to be a formidable force in the primaries and the general election. I promise you that the tea party will be mentioned in every political analysis and every strategy for candidates this year. If that is not influence, then I do not know what it would be. We are not going away. We are no longer using the exclusive forum of large rallies, but are engaged in regular membership meetings, voter education and registration, and hosting candidate forums and ensuring the validity of our votes in future elections.

10) What message would the Tea Party want to deliver in this race? I am me. I represent only one person who happens to be a leader of a fairly strong, local tea party group in Texas… so, I can’t speak for “the Tea Party”….but, this race comes down to a belief in one of two visions…..1) Big Government: a belief that government is the answer to our needs and woes or 2) Limited Government: a design in which the individual citizen, business and the state and their constitutional freedoms have precedence over an ever-growing, out-of-control Federal Government. The tea party will clearly be in the second camp and we will go to bat for a smaller, respected government with limited powers.

11) Is there anything else that I haven’t asked that you might want to add? The tea parties clearly have an agenda. Newspapers clearly have an agenda and are often at odds with our tea party values. We hope you will listen to the conservative voices over the next year and report them fairly in your publications.

We are also on FaceBook: Texas Patriots Tea Party and Barry A Schlech