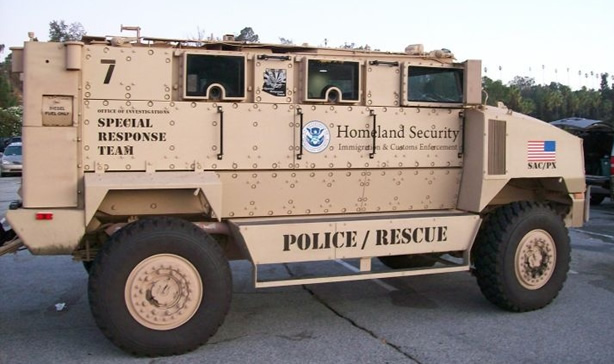 The Department of Homeland Security (DHS) is growing its firepower capability to respond to widespread disorder within America.

Until someone leaks a memo that reveals why, the public is wondering what’s up with the ramp-up.

Go stand in a line outside a large sporting goods store that sells ammo an hour before it opens and ask those in line – mostly men, but a few women – why they’re there.  A variety of explanations surface:

The federal government is moving toward gun control by first limiting citizen access to ammo.

The feds plan to disarm the citizenry and is limiting ammo to decrease the severity of any armed resistance to that move.

Some expect that, someday, only criminals will be armed, and law-abiding citizens will be left defenseless when their families and property are threatened.

The more elaborate explanations involve invasions from outside the country as hostile forces, or U.N. blue helmets, patrol America’s streets.

When asked why .22 caliber ammo is hard to find, and expensive when available, you’ll hear it described as the survivalists’ choice of bullets because it’s usable in both .22 cal. rifles and handguns.

As the DHS builds up its firepower, so are American citizens, as the population of gun owners expands.  And it’s not just among young macho men, beer-drinking rednecks, kooky survivalists, and militia-types, as the liberal wine-and-cheese set imagines. (There’s a cornucopia of stereotypes!)

Meanwhile, the DHS dials up its capabilities to deal with…something.  And that “something” is probably not the anticipation of a flurry of natural disasters (multiple hurricanes in rapid succession), vast meteor showers (scores of hits as in Russia recently), or alien invasions (human or extraterrestrial).

Let’s assume that the imagined threat is homegrown, subject to an undefined and uncontrollable timetable, will have negative repercussions across society but be focused in America’s dense metropolitan areas, and be resistant to national leadership (not that we have any) appeals to the better angels of our nature.

And, let’s define the threat as an event, or series of events, likely to bring widespread civil unrest – not all at once, but in a sustained, cascade of street violence. Events that would require the deployment of well-armed, homeland security assets with armored street vehicles immune to small arms résistance, and available for rapid federal deployment.

There is only one initiating force capable of triggering a series of events that would require the DHS to deploy its ramped-up firepower. That overwhelming force is the power of arithmetic.

America’s welfare state has begun to collapse.  Slowly at first, but at a rate destined to accelerate.

It won’t happen overnight, because like Rome, it wasn’t built in a day. But the fall has begun.

Illinois, with a GDP roughly equivalent to that of Greece, is in worse financial shape than Greece, where the citizenry is not well-armed.

California’s unfunded pension liability for city, county and state government workers is…huge is not too big a word.  The City of Los Angeles estimates a $222 million budget deficit for the 2013 fiscal year, and expects a $427 million deficit for fiscal year 2014-15, and the state can’t print money.

Within a few years the combined debt of city, county, and state governments will reach two trillion dollars. That number isn’t factored into the federal debt. Detroit’s pending bankruptcy is a precursor of other cities to follow – big and small.

Independent school districts across the nation are cutting staff and teachers.  (Visit http://www.dailyjobcuts.com to track the trend.)  So are some less well-known universities and colleges.  It’s costing parents too much money these days to protect their kids from unemployment by extending their college years.  And, soft discipline college degrees have lost much of their economic value. (Getting a degree in journalism? Apply at McDonalds. Bachelor’s in psychology? Kroger’s is hiring. Major in political science? Go to law school where applications are declining.)

Unions, cities, states, the federal government, have all over-promised on benefits and will scale down pension checks. Means-testing for social security benefits is coming.  The feds are eyeing 401K accounts for access to some of that money.  New and creative taxation venues are emerging.

The canine appetite of the federal government for money appears limitless, as long as it can create money from vapor and paper. But there is a limit, and it’s approaching, as the welfare state begins to feel the death grip of cold, impassionate numbers.

The mathematical impact on the plethora of American entitlements will be ubiquitous, affecting the employed, the underemployed, the unemployed, and the retired. All but the super rich and the dead.

The current contrived histrionics over the sequestration nonsense is to the serious budget cuts ahead what pre-game drills are to the kickoff of an NFL Super Bowl – only a warm-up to the real hitting to come.

Despite the regime’s claims, the sky isn’t going to fall because the federal government is now reducing, slightly, the increase in its budget.

But the sky will light up when serious budget cuts become the only alternative to national credit default.

Many of today’s Americans will not adjust well to even modestly disagreeable depravations.  They will come to many as an unexpected shock. And those who’ve come to rely upon the entitlement promises of governments will not adjust passively to what they’ll perceive as a betrayal.

There is ugly ahead.

Factor in the possibility of inflation that exceeds the Carter years (where the 30-years loan for the first house I bought carried a 16.5% interest rate), plus another round of big bank failures, and the ramp-up in DHS capabilities begins to make sense. Even look prudent.

The consequences of the ultimate foolhardiness of Quantitative Easing – the Fed’s on-going policy of propping up the stock market with wealth created from vapor and paper – will reach a day of reckoning.  The notion that the Federal Reserve System can gradually deflate the money supply overtime as the economy gains strength is a Keynesian pipe dream that even John Maynard would recognize as a recipe for economic disaster.

The more conventional explanations concerning the DHS preparations are entertaining and make for animated speculation, but most lack the crunch of cold-blooded numbers.

President Obama’s policies and leadership have intentionally sown the seeds of division in American between races and classes, amidst his destructive economic policies. The DHS may somewhat lessen the disorder at harvest time.  Or may not.