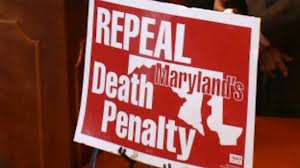 Governor Martin O’Malley’s dream came true Friday, March 15, 2013 with the repeal of Maryland’s Death Penalty. Several amendments to allow for the death penalty for murders committed in prisons, murder of police officers or firefighters in the course of their duties and murders in schools were all soundly defeated.

What in God’s name were these legislators thinking when they voted against these amendments? Oh, that’s right, they want to pass the strictest gun laws in the nation, which will impact only the law-abiding. Never mind innocent lives being snuffed out by a mentally impaired person or a career criminal. Let’s protect the lives of those who kill without remorse, or simply want to make a name for themselves. Let’s give a warm home, with three meals a day, free medical and dental care, access to libraries and exercise equipment to a mass murderer. Let’s make him or her comfortable for the rest of their lives and to hell with the families and friends of the innocent victims. And, those of you who sided with Governor O’Malley and granted his wish, that’s exactly what you did. You stood up for the rights of murderers to live and turned your backs on the families of those who lost their lives.

I’ve often wondered how many of these legislators have ever walked through a crime scene? How many of them have looked at the end result of what these people, they are so determined to protect, did to a young child, or pregnant mother? I doubt that many could raise their hands and say they have. Do they think that within a matter of a few weeks or months a family’s grief will pass and life for them will miraculously return to normal? The lives of those families will never again be normal, because a part of it has been taken from them—a part that cannot be returned. Only the legislators, giving the free pass to the killer/killers, will return to a normal life—a life of seeking reelection, getting fat at fund-raisers and forgetting the faces of the innocents they ignored. They don’t know that time does not heal the emptiness and heartache of losing a loved one to a brutal, cold-blooded act of murder.

They needed only to call Steve Basu to testify and ask him about his life after losing his wife, Pam, to a carjacking murder in 1992. The brutal death of Doctor Pam Basu and forcible taking of her car on September 8, 1992 is the singular incident, which defined carjacking. In an act of savage brutality, Pam’s life was snuffed out, Steve lost a loving wife and, twenty-two-month old daughter, Sarina, was deprived of her loving, caring mother, and the world lost a brilliant, scientific mind.

Pam and Steve were filled with excitement on that beautiful, sunny Tuesday morning. It was Sarina’s first day of pre-school and they couldn’t wait for the moment when she entered the school and met her classmates. Steve began filming the events in their home and followed Pam and Sarina to the door, videotaping their departure for school. He would follow shortly to continue recording the “big day” to show to family and friends later.

Pam placed Sarina in the back of her car while Steve kept the camera rolling, unaware of the two men walking by in the background. One of those men, Rodney Eugene Solomon, quickly pointed a finger at Pam’s car while glancing over his left shoulder at Bernard Eric Miller. They waited at the intersection of Horsham Drive and Knights Bridge Road for Pam and ambushed her. Solomon rushed to her car, reached through the open window and began beating her. Within seconds, she was pulled from the car, her arm becoming entangled in the seatbelt. Solomon jumped behind the wheel, as Pam struggled to reach Sarina.

Witnesses reported hearing her scream, “My baby. My baby,” as Solomon slammed the car door and sped away. Pam, her arm trapped in the seatbelt, would be dragged for 1.75 miles before they stopped and dumped her body in the middle of Gorman Road. Sarina had been taken from the car and thrown on the side of the road a short time after the initial attack.

My wife, Jody, was the first officer on the scene of the crime and, later, I was assigned to the courtroom for the trial of Bernard Eric Miller. Miller could not be given the death penalty because of his age at the time of the trial, but a jury saw fit to spare Solomon’s life as well. At one point during Miller’s trial I saw him turn, look over his shoulder and smile at his friends as a witness testified regarding the sights and sounds of Pam Basu’s body being dragged. Not much remorse there, is it?

About a year after Solomon’s trial I began writing a book about the events and Jody and I were asked to present a case studies to students at Johns Hopkins University. During those presentations questions were asked about Steve and Sarina and I went in search of the answers.

In February 2008 I met Steve Basu and began talking with him about the book and its content. He admitted, almost immediately, that he still had not found closure and Pam’s death continued to haunt him. At times during our initial conversation he became very emotional and had to compose himself in order to go on. Our first meeting lasted almost two hours and I was surprised when he asked if he could see what I had written. I agreed, but sternly warned him the content was extremely graphic and there was no way to sugarcoat what had happened.

I gave him a draft copy and when we met again, he said he could only read a small portion and had to stop. Then he asked if he could tell me about life before and after Pam’s death and asked if I would include it in the book. Again, I agreed and the next time we sat down with a tape recorder and he began to tell me his side of the story. He had to stop several times during our talk and gather himself in order to go on. And, I can certainly say, his emotion came from deep within his heart and his tears were real.

We began meeting on a regular basis and talking and eventually he began to ask questions about other officers who investigated Pam’s murder. Still, that emotion was always there and he would often choke up or tear up while talking. As time passed, Steve, and I became good friends and have continued to meet. His initial meeting with Jody was a bit tense, but he now feels comfortable with her and values her friendship.

The book, “Fatal Destiny – The Carjacking Murder of Dr. Pam Basu” was published in early 2012. With that came requests for interviews and for the first time since Pam’s murder, Steve consented to talk with the media about her death.

Yet, he said he would only do so if Jody and I were present. The interviews often broke down his emotional barriers and the questions had to be stopped while he took time to pull himself together.

My point is, this is a murder 20 years behind Steve Basu, but it still rips him apart. He’s told me on a number of occasions he has been involved in relationships, but cannot bring himself to take the next step. Why? Because he cannot erase the image of what happened to Pam. How many nightmares haunt Solomon and Miller over Pam’s death?

O’Malley, his legislators and his constituents brag about saving the lives of those who kill without remorse. At the same time, they have announced to the world that they value the lives of murderers more than those of Maryland citizens who, every day, abide by the laws of God and man. And, at the bottom of the list of lives least valued by O’Malley and company are those of police officers, firefighters and school children.

Behind rose-colored glasses, O’Malley and his ilk live in a make-believe world as crusaders for their vision of perverted justice, while Steve and Sarina Basu and so many others still cry out for actual justice. Even with the passing of time, their wounds and ours, still bleed.

James H. Lilley is a retired Sergeant of the Maryland Police Department