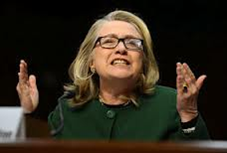 In what seems like a few short decades, Hillary Clinton has dragged Democrats from, “I have a dream” to, “What difference does it make?”  To Democrats, all questions are rhetorical.  All you need to do is actually provide an answer to set them back on their heels.  Hillary tried to substitute outrage and indignation for reasoned argument.  She is not the first Democrat to do this and I suspect she will not be the last.  Questioned in front of a congressional committee as to how the administration came to so blatantly mischaracterize the incident in Benghazi, Libya, Hillary said, “What difference does it make?”  Perhaps I can shed some light on this vexing question.

Some may have found it curious that Hillary Clinton came to the hearings wearing Buddy Holly’s glasses.  Fox News explains that the glasses are a hat tip to her undiagnosed concussion.  But I could not help reflecting on “Brain Games,”(Episode 1 ) an interesting series currently running on The National Geographic Channel.  In this series you learn how what we see and even what we hear are altered by light, shadow and context.  I asked myself, ‘are these glasses just a prop to make the obviously stupid and blatantly inaccurate things Hillary was saying sound intelligent and accurate?’  To me, this is an obvious manipulation.  When you are being manipulated, it makes a difference if you know it.   ~  Terrell AronSpeer   The Hillary Shuffle