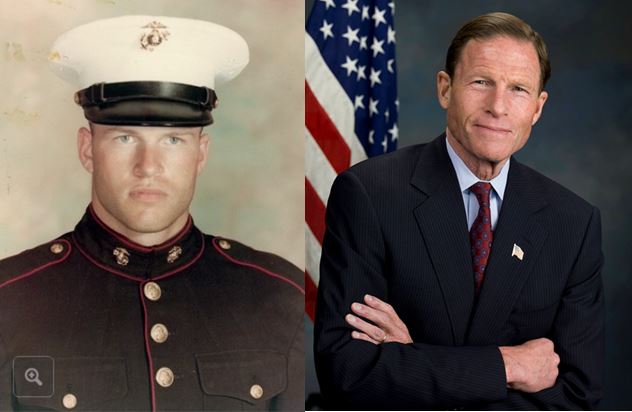 “‘He was colluding with a leader of a hostile power,’ Blumenthal said.”

Senator and former U.S. Marine Blumenthal elaborate on his accusations against President Trump in a series of tweets that include the following:

In 2008, Blumenthal cited his bona fides as a Vietnam War veteran to authenticate his candidacy for the U.S. Senate seat once held by Chris Dodd.

According to the New York Times:

“At a ceremony honoring veterans and senior citizens who sent presents to soldiers overseas, Attorney General Richard Blumenthal of Connecticut rose and spoke of an earlier time in his life.

‘We have learned something important since the days that I served in Vietnam,’ Mr. Blumenthal said to the group gathered in Norwalk in March 2008. ‘And you exemplify it. Whatever we think about the war, whatever we call it — Afghanistan or Iraq — we owe our military men and women unconditional support.’”

Impressed by his military service, the voters in Connecticut gave their support to Vietnam Veteran Blumenthal and elected him to the U.S. Senate, even though, according to the Washington Post (May 18, 2010):

“The New York Times reported Monday night that Connecticut Attorney General Richard Blumenthal has claimed numerous times that he served in Vietnam, even though he obtained at least five military deferments and avoided ever going to war.”

“The Times reported that Blumenthal obtained deferments from 1965 to 1970, then joined the Marine Reserve in 1970 and was based in Washington through the end of the war. The newspaper said that the deferments allowed him to finish a degree at Harvard and serve as an assistant to The Washington Post’s publisher, Katharine Graham.”

[Oops! Seems Blumenthal was only a veteran of the beltway traffic war.]

“Blumenthal told the Times on Monday that he misspoke about his service at a 2008 event and might have misspoken at other times. ‘My intention has always been to be completely clear and accurate and straightforward, out of respect to the veterans who served in Vietnam,’ he said.”

So, did Senator Blumenthal “misspeak,” or mis-tweet, about Trump mirroring the behavior of Neville Chamberlain, Trump dancing to Putin’s tune, and Trump betraying America?

Inquiring minds want to know – but most already do.