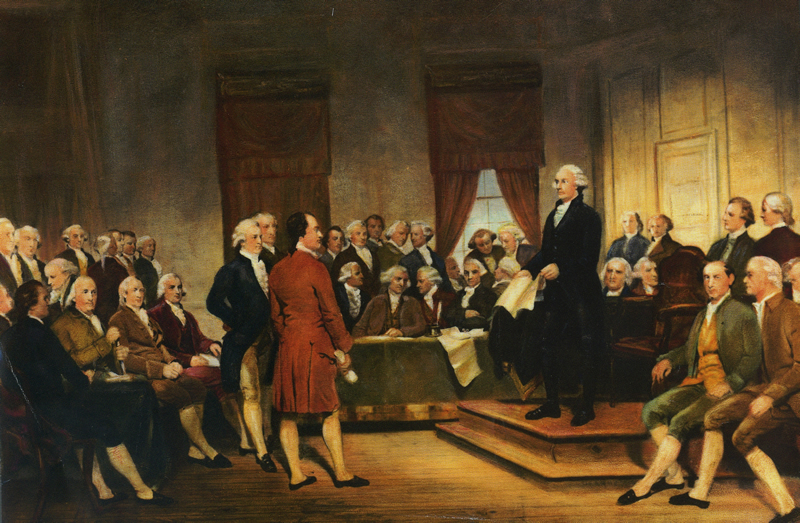 Author’s Note: The attention of many Americans currently is focused on Special Counsel Robert Mueller’s investigation of Russian collision in the 2016 national election. Much attention also is devoted to allegations of various criminal actions being committed at the highest levels of the federal government. While these situations rightly warrant close attention, we Americans must not overlook nor minimize the importance of several serious, systemic problems that only the full use of the United States Constitution hopefully can fix. Two of these ongoing problems are (1) a monstrously growing national debt of over 20 trillion dollars; and (2) a deeply entrenched system of patronage and self-serving behavior exhibited by many long term members of the US Congress.  As explained herein, there is an urgent need for leadership and unity of effort to use a heretofore unused component of the Constitution to address and hopefully solve these problems as well as problems with the federal government egregiously exceeding its Constitutional authority.

Disclaimer: This article does not necessarily reflect the views of TEAParty911.com or its members.

Many Americans most likely will be surprised to learn that a very important component of the United States Constitution has never been used since the Constitution was written in 1787. If this component is used, it could very well solve several pressing problems that exist at the federal level of government.  But as the below narrative explains, there is tremendous opposition to the use of this particular Constitutional component by several groups, including many organizations funded by multi-billionaire and leftist George Soros and others like him who desire for America to go bankrupt and otherwise evolve into somewhat of a socialist state.  Opposition also comes from a few right-wing oriented groups for various reasons.

The unused component is embedded in Article V of the Constitution and relates to how state government legislators have inherent power, as described herein, to propose urgently needed amendments to the Constitution, especially critical amendments that members of the US Congress absolutely refuse to propose!

Below are two examples where Constitutional amendments need to be proposed by state legislators:

(1) America today has a national debt of over 20 trillion dollars! The interest that has to be paid on this amount of debt could soon amount to more than America’s national defense expenditures—a totally untenable situation.  Exacerbating this problem is the fact that members of the US Congress refuse to move forward with an amendment to the Constitution requiring that the federal government fiscally constrain itself and responsibly operate on a bona fide balanced budget.

(2)  Serving in Congress has become a long term, often self-serving profession rather than a privilege of public service and relatively short term civic duty as envisioned by America’s Founders in 1787.  Back then, the average life span was approximately 50 years which means the Founders were not terribly concerned about people serving in Congress in their 70s, 80s, and 90s.  It is a known fact that various mental abilities usually diminish in older age, but yet there are many deeply entrenched, elderly people continuing to serve in Congress.  Members of Congress refuse to move forward with an amendment to the Constitution to limit the total number of years (12 to 15 years for example) that a member can serve.  Such an amendment should allow many more citizens to serve in the Congress hopefully with new ideas, greater energy, sharper minds, and much less indebtedness to various interest groups and donors.

Most Americans probably will agree that presently there is an overabundance of bitterness and divisiveness between many Republican and Democrat members serving in the US House of Representatives and US Senate.  Indeed, it is very wishful thinking to hope for a two-thirds majority of the members in both House and Senate (required to propose an amendment) to ever agree on any Constitutional amendment these days or in the foreseeable future.

Thank God the Founders of our great nation had the wisdom and foresight to prescribe a second method of proposing amendments to America’s Constitution that is separate from and does not involve members of the US Congress.  This second method has never been used in over 230 years but now is the time to do so!  Article V stipulates that upon application by two-thirds of the state legislatures (34 legislatures today), Congress “—shall call a Convention for proposing Amendments—“, commonly called a Convention of States.  The language in Article V makes it very clear that Congress must call this convention upon receipt of the 34 state legislature applications.  Neither the Congress nor any other part of the federal government will have any meaningful role in the operations of and outcomes of this state legislators’ convention to propose amendments.  An essential “safety valve” against any rogue type amendment (proposed by Convention of States delegates) ever becoming part of the Constitution is the fact that a proposed amendment must be ratified by the full legislatures (some controlled by Republicans,   some controlled by Democrats) of at least 38 states to become part of the Constitution and law of the land. With the exception of Nebraska which has only one legislative chamber, all other states have two legislative chambers (House and Senate) meaning that any proposed amendment must gain a super majority vote of either 75 or 76 independent legislative chambers in order to become part of the Constitution.  This is indeed a very high bar to reach and thus, functions as a very effective safety valve against any rogue type amendment.

So, what is the current status of effort for 34 state legislatures to apply to Congress to call a Convention of States?  During 2018, there have been efforts by at least 10 different “grass roots” groups to have legislators in their respective states pass resolutions applying to Congress to call for a Convention of States.  The three most active, principal groups are US Term Limits, Balanced Budget Amendment Task Force, and the Convention of States Project.  During the past several years, there has been much duplicity of effort resulting in various state resolutions being submitted to Congress.  Some of the resolutions pertain only to one specific amendment while others pertain to multiple amendments.  None of these efforts in and of themselves have reached the threshold of 34 state applications, and it appears highly problematic that any ever will.  Unless something changes, a Convention of States may never happen, thus preventing and depriving the American people from using a very important element of their Constitution.

A major reason for the overall lack of progress in having state legislators apply for a Convention of States is the tremendously well funded opposition by groups such as the John Birch Society, Eagle Forum, Common Cause, National Association for Gun Rights, and some labor unions.

While many members of these groups are, no doubt, well intended, patriotic Americans who deeply care about America, there is strong evidence that multi-billionaire and leftist George Soros is funding many of these groups in one way or another.  This man and others like him desire for America to continue in its downward spiral to bankruptcy and ruin.  The above organizations falsely claim, for example, that state legislators are not capable of managing a Convention of States.  They falsely use the slur “con con” phrase to portray a Convention of States as a “Constitutional Convention” where a brand new constitution will be written.  While conveniently overlooking the ratification “safety valve” previously mentioned, they falsely state that a convention will result in a “runaway convention” thereby destroying the Constitution and causing the collapse of the country.  Regrettably, these “scare” type statements have turned many a state legislator against efforts to call for a Convention of States.

The above opposition coupled with the unsuccessful duplicity of effort among different groups desiring a Convention of States begs the question: is there a better strategy for seeking a Convention of States? This observer believes that indeed there is a better strategy, but it requires much cooperation, pooling of resources, and unity of effort among a majority of the groups pressing for a Convention of States.  It may be that a new entity is required (with no vested interest in any particular amendment) to provide the leadership and means to focus all resources and efforts to have at least 34 state legislatures apply for a convention.  As the saying goes, there is strength in numbers, and it is hoped that a pathway to such cooperation and focus in effort will soon emerge.

This observer believes that America most definitely needs a Convention of States as soon as possible.  There is so much at stake for the nation.  There is little risk and much to gain from having state legislators fulfill their duty to use their inherent authority in Article V of the Constitution to propose absolutely essential amendments. We John Q. Citizens need to demand nothing less from our state representatives; that they use the power granted to them by our forefathers in Article V!

We citizens also need to strongly encourage and support the close cooperation and focus of effort by a majority of the different groups desiring a Convention of States.  Such cooperation should allow them to pool their resources so that collectively, they can be an effective “fighting force” to overcome the very strong and well funded opposition mentioned above