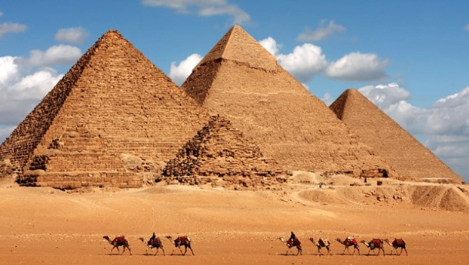 UN Headquarters, NYC:  The United Nations Commission for the Preservation of International Monuments (UNCPIM) issued a statement on July 4, 2020 calling upon the Government of Egypt to dismantle and remove its pyramids.

The UNCPIM is chaired by the Delegate from Afghanistan representing the Taliban, Mawlawi Hibatullah Akhundzada. The Taliban has extensive past experience in removing ancient Buddha monuments in its own country.

Mawlawi read a statement shortly after the UNCPIM meeting adjourned announcing the commission’s unanimous decision to call on Egypt to remove the “stain of slavery” from its landscape.  Mawlawi told reporters that:

“The pyramids stand as monuments to the forced enslavement of generations in order to display the supremacy of the Pharaohs. It is time to remove these monuments, once and for all.”

When asked by a CNN reporter if the commission advocated paying reparations to Israel, Mawlawi laughed, and said, “Hey, do I look like a putz who just fell off a kebab market cart?”

UN officials estimate that it will take 15-20 years to complete the removal of just one of the huge structures.

A confidential source within the UNCPIM stated that a Chinese Deconstruction Company has been asked to submit a bid for the first pyramid removal.

The effort would be funded by a proposed initial UN monument-removal grant of $273,000,000,000 USD, with 75% of the first tranche of funding coming from the United States.

It’s been suggested by several high-ranking career diplomats in the US Department of State that, if the upcoming UN plenary session approves the project, former Secretary of State John Kerry be given status as Special UN Envoy to oversee the proposed UN Project of Pyramid Removal (UNPPR).