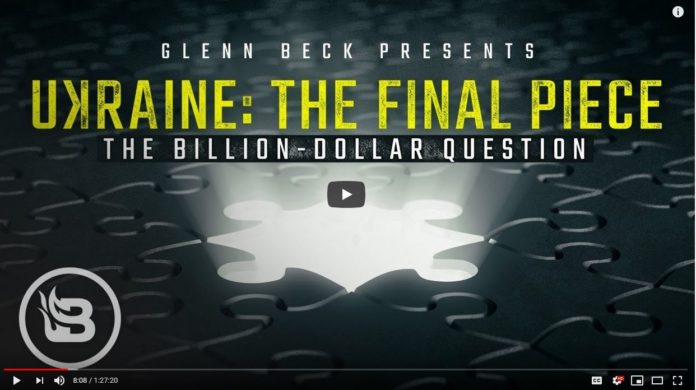 Ukraine: The Final Piece is an in-depth look by Glenn Beck into exactly what happened to the missing $1.8 billion US taxpayer dollars that went “missing” in Ukraine. Glenn will clearly show that what happened in Ukraine went way beyond just money laundering, but details actual crimes that went all the way to the top in the previous administration. This is the real reason for the impeachment of President Donald Trump; the Democrats know that if these crimes are ever prosecuted, many high level government officials will be imprisoned.

The media and the Left drove the narrative from the start on the July 25 phone call between President Trump and Ukrainian President Zelensky. They wanted us to see only one thing. It’s time to look at more. Glenn Beck connects the dots between the phone call that led to the impeachment of President Trump and why an investigation into Hunter Biden is so important. Ultimately, this was never about Trump. It wasn’t even about the Bidens. This is about a violation of constitutional power by Barack Obama that will horrify even his most ardent supporters. Glenn pulls back the curtain on the theft of billions in international funds to Ukraine by following the clues in the phone call. Those clues could lead to mountains of corruption, and Hunter Biden might be the lynchpin to uncovering the entire thing.

Stand up for independent media and investigative reports like this by joining BlazeTV today for $20 off with promo code GB20OFF at: https://blazetv.com/glenn