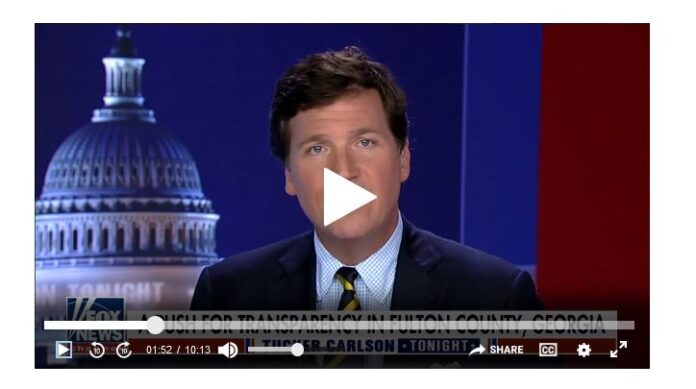 The left has been saying “no evidence of voter fraud” in spite of mountains of evidence to the contrary. In the video below, Tucker Carlson shows how votes were counted twice in Georgia, and that hundreds of ballots were “improperly duplicated.” (Not quite sure how ballots can be “properly” duplicated, but that’s another discussion.)

Also in recent news, former President Donald Trump reportedly released a letter that exposes former Attorney General Bill Barr forbidding a former United States Attorney from investigating voter fraud and election crimes in the state. Barr denies the allegations, but it begs the question, did Barr not find evidence of voter fraud because he ordered U.S. Attorneys not to investigate possible fraud cases? It is pretty easy to say you found no evidence of voter fraud if you refused to look for it.

TUCKER CARLSON: On a Saturday night in late May of this year, an alarm sounded in a big nondescript warehouse in Fulton County, Georgia. The warehouse was an unlikely place for a burglary. It was under round-the-clock surveillance by both private security and local law enforcement including armed deputies with the Fulton County Sheriff’s Office.

Any unauthorized person entering from the outside would have to get past a locked 100-pound steel door, as well as a maze of motion detectors — not easy — but someone tried to do it, anyway and at just the perfect moment, 20 minutes after the deputies in charge of guarding the warehouse left their posts.

By the time those deputies returned to check out the alarm, someone had opened the 100-pound door to the warehouse. So, what happened that night? And why? We still don’t know.

It’s also not clear why the deputies left the warehouse or who took advantage of their absence? We do know that a lot of people might have had reason to try to get inside the warehouse.

Depending on who you ask, the building contains evidence that either confirms or refutes the claim that voter fraud affected the outcome of the 2020 election in the state of Georgia. Georgia is a place that Joe Biden won by fewer than 13, 000 votes. That warehouse holds more than 140,000 absentee ballots.

Now, what’s interesting is that for reasons that are difficult to understand, Fulton County officials have refused to let the public see any of these ballots.

An attorney called Bob Cheeley has been pushing for transparency. He has filed suit for the right to see those ballots. He hasn’t seen them all yet, but what he has found so far demands an explanation.

All of us, no matter who you voted for should want to hear that explanation. You can’t have a democracy if the public doesn’t believe election results. Increasingly, many people in this country don’t believe them.

The solution to that problem and it’s a significant problem is not to scream at these people, call them lunatics or throw them in jail. The solution is to tell the truth about what happened. The only way to restore trust in our system is with facts.

So what are the facts about the election in Fulton County, Georgia? Well, here’s the official version.

In May, the Chairman of the Fulton County Board of Commissioners, a man called Robb Pitts explained that it was not necessary to look at the ballots, in fact it was ridiculous even to ask to look at the ballots because there had already been plenty of recounts and all the recounts reached the same conclusion.

Here is what Pitts said — and if it sounds familiar as you hear it, that’s because so many other people in authority have been saying pretty much the same thing.

ROBB PITTS, FULTON COUNTY BOARD OF COMMISSIONERS: I mean, I’m really baffled about this. What do they want? We’ve had three counts already.

The elections in Fulton County, Georgia, they were open, they were fair, and they were transparent.

This will be the fourth one, and I can guarantee you that the results will be — of this one will be just like the results were for count one, count two, and count three. No change.

Again, our elections are open, fair, and transparent.

CARLSON: “I can guarantee you.” We already know what happened, we’ve counted those same ballots four times. The election has been certified. Stop already.

And that’s the argument that Fulton County has used in court to keep those ballots locked away in a warehouse, except it’s not true. It now appears there actually was meaningful voter fraud in Fulton County, Georgia last November.

That is not a conspiracy theory. It’s true.

From the beginning, this show has tried to be fact-based when we talk about the 2020 election results. So here’s what we know tonight, factually. At least 36 batches of mail-in ballots from the November election were double counted in Fulton County. That’s a total of more than 4,000 votes. Those numbers come from a group called Voter GA which along with Bob Cheeley sued to get them.

The final tally from the double counts we know about amounts to more than 3,300 votes for Joe Biden and 865 votes for Donald Trump.

Now before you dismiss Bob Cheeley and Voter GA as dishonest partisan actors, keep in mind that the strongly left of center “Atlanta Journal Constitution” appears to agree with this at least in outline. The newspaper reviewed the available digital ballot images independently and concluded that hundreds of ballots were improperly duplicated.

At a press conference yesterday, a consultant with Voter GA called David Cross showed how we can be certain that votes in Fulton County were counted more than once. Watch.

DAVID CROSS, CONSULTANT FOR VOTER GA: What I’m going to show you here is two ballots side-by-side, one of them is marked for Jason Shaw, it’s got a little squiggle mark next to it, you can see it’s got the identical mark on the second one and the ballot image is stored up here on the top left.

So you have the same ballot counted twice in the images and counted in the audit. How that’s possible, I don’t know.

CARLSON: “How’s that possible? I don’t know.” Every American should want to know because the answer gets to the heart of the integrity of our elections, otherwise known as our democracy. We’re not talking about a couple of ballots here. We’re talking about a lot of ballots, at least hundreds of ballots involved, enough potentially to affect the outcome of the election.

So, no question that that ballot was counted twice.

CARLSON: So, what’s the explanation for this? Well, if you ask Fulton County, these discrepancies, the ones you just saw on the screen were isolated incidents, just a handful of bad ballots. It happens all the time.

The county claims that any errors were caught in previous recounts. The problem is that neither one of those claims is true. Surveillance footage obtained by Voter GA appears to show large numbers of ballots being scanned multiple times.

Pay attention to the tape we’re showing you to the woman wearing yellow at the desk. According to Voter GA, she slides ballots into a scanning machine, removes the ballots and then reinserts the same ballots. This happens multiple times.

The question is, how many times were those ballots counted? Was each vote counted more than once? Fulton County won’t answer that question.

Now one way to know the answer would be to check what are called audit tally sheets. Tellingly for months after the presidential election, Fulton County failed to provide more than a hundred thousand of those tally sheets including 50,000 of them for mail-in ballots.

We’ve obtained photographs showing what went on during the recount process for mail-in ballots in Fulton County. These pictures were taken by a whistleblower who participated in the recount. She said she noticed something odd as she did. None of the ballots that she saw had any creases on them. You can see the stacks of unfolded ballots on your screen now.

That’s strange because of course mail-in ballots need to be bent in order to be mailed in. These ballots clearly had never been inside an envelope. And then the whistleblower noticed something else, all of the ballots, the whistleblower tells us have been filled out by a printer, not by hand and many of them supported the exact same candidates — Democrats including Joe Biden.

Voter GA detected a series of other apparent irregularities in the recount. The group’s audit found for example that quote: “Over 200 Fulton County mail-in ballot images contained votes that were not included in the hand count audit results for the November election.” Now, why is that? We don’t know.

Keep in mind, once again, the results in the State of Georgia were decided by fewer than 13,000 votes. It was a close race. Every vote mattered.

And then there’s this. An elections expert called Mark Davis analyzed data from the Post Office. He found that nearly 35,000 Georgia voters moved out of their county of residence more than a month prior to Election Day. They were ineligible to vote, and yet they did. They still voted in their old county. That is illegal. It’s not a small thing, violating election law is something we should care about.

We’re okay with it because we’ve been told we have to be okay with it. We’re undermining democracy if we ask questions about what happened during the 2020 election; and of course that’s a perfect inversion of the truth.

People begin to understand the system they’ve been told that is on the level is in fact rigged, and when they believe that, God knows what they do next.

Looks like the left needs to rethink their talking point of “no evidence of voter fraud.”