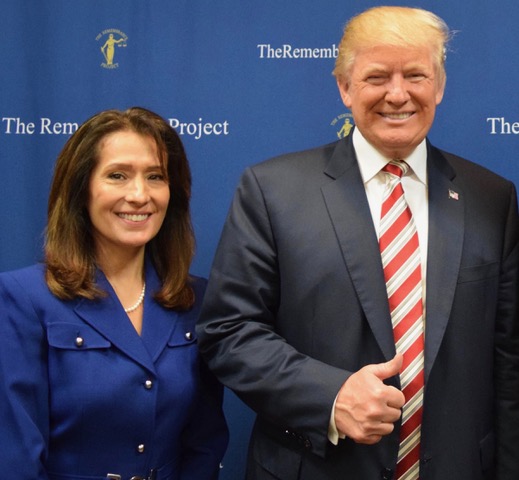 Espinoza created the movement that brought to light the widespread killings of Americans by illegal aliens. For nearly 10 years, she’s battled against the swamp to give these victims a voice, and works with Angel Moms, Dads and Angel Families whose cases were ignored for decades. It was Espinoza who in 2015, brought these families to the attention of Presidential Candidate Donald J. Trump who made their plight the centerpiece of his campaign.

Espinoza has testified before Congress on National Security and is widely accepted as the person who elevated immigration to the nation’s attention. Even the not-so-balanced Univision recognized Espinoza’s influence where she’s the only female listed in their article Meet the 15 Immigration Hawks defining Trump’s Agenda. Illegal immigration is by far the number one concern of the majority of American voters, especially those in Texas.

In 2017, President Donald Trump fulfilled his promise to Ms. Espinoza and created the President’s Office of VOICE – Victims of Immigration Crime Engagement—a true testament to her work.

Maria has testified before Congress on National Security, alongside the president of the Border Patrol Council Brandon Judd. She participated on Judicial Watch’s Immigration Panel, alongside former ICE Director Thomas Homan.

In 2016, Trump was Espinoza’s keynote speaker at The Remembrance Project’s first National Conference in Houston’s CD-7, where for the first time in history angel families were brought together to share and learn that they were not alone and have the support not only of The Remembrance Project, but also a strong ally in future President Donald Trump.

Espinoza won the support of Texas Agriculture Commissioner Sid Miller, who serves as her Campaign Treasurer and who said, “There has not been a more tireless or effective voice on behalf of the victims and who gave a national platform to the angel moms, dads, and other family members of the victims of criminal illegal alien crime than Maria Espinoza.” He further stated, “She has brought their horrific stories to life and in so doing galvanized the nation about the importance of securing our Southern border and putting the lives and welfare of American citizens first. I don’t think Donald Trump would be President of the United States today if it had not been for Maria and The Remembrance Project. I look forward to working alongside her as she takes her message to the Harris County voters. She will make a great member of Congress and will make Texas and America proud.”

Espinoza promised, “If I am elected, I will continue my support of President Donald Trump’s America First Agenda whose policies have resulted in the GDP growth of 3.6% and the lowest unemployment in over 50 years for Latinos and women. His policies have been good for America, good for Texas, good for Harris County and District 7.

“The people of our district deserve a proven conservative leader representing them in Congress who will stand with President Trump and help him enact his agenda—not one who works to thwart President Trump’s agenda. I lived and worked in Washington, DC, for two (2) years – I know the swam and the deep state – I cannot be bought, and I will be a strong leader in Congress for the constituents in CD-7,” Espinoza concluded.