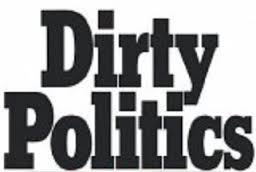 Definition: Dual – of, pertaining to, or noting two. Composed or consisting of two people, items, parts, etc., together; twofold; double.

Have I misspelled Senator Dual’s name . . . or have I? Do “Deuell” and “dual” mean the same thing? In this case, yes they do.

In 2002, the voters of Senate District 2 elected one Bob Deuell to represent them in Austin. But as the years have passed, two Deuells have emerged.

For the first time in his political career, he has a serious challenger and the other Deuell, of whom, up until now, we have only seen bits and pieces, is now on full display. And what are we seeing: a kind & genial doctor? Hardly! How about a ruthless politician who will stoop to anything to stay in office? But what else can he do? Run on his record?

If you find this charge difficult to believe, take a good look at the malicious, unwarranted attacks he is making on his opponent, Bob Hall.

The race for SD 2 was not supposed to end in a runoff. Deuell had name recognition, establishment endorsements, and lots of money. Bob Hall is an ordinary citizen who loves his country and served in the military. He is a political newcomer who is well known among grassroots activists for his hard work as a true conservative. His campaign ran on a shoestring. Deuell, along with the rest of the establishment, expected an easy win. When he failed to get even half the vote, it sent Texas RINOs into shock.

But they quickly recovered when they realized that Deuell would not win on the “merits” of his voting record, so they immediately started slinging mud. In his desperation, Deuell has dropped the nice guy pretense. Like the liberal Democrats, he has embraced the “politics of personal destruction” straight from the Obama and Clinton playbooks. His paid investigators have dug deep into Hall’s background, cherry picking whatever they could find that they could spin & twist in an attempt to embarrass and discredit Hall.

Back in 1994, after a strenuous divorce, a simple complaint by Hall’s ex-wife was officially dismissed by the court as totally groundless. But the accusations remain part of the court records. When Deuell leaked his findings to the press, he purposely withheld the Dismissal Order which totally exonerated Mr. Hall. Deuell’s dirt diggers thought they were having a field day. However, the Dismissal Order, which Deuell does not want you to see, has now been released to the public by the Hall campaign. Deuell-and the lapdog media trying to save him-have failed to mention it.  I guess they forgot.

Imagine the surprise the Deuell mudroom got when the only statement their expensive private investigator got from Hall’s ex-wife was that she “wished her ex well and hope that he won the race.”

Deuell and his media allies are demonstrating their disdain for you, the voter, with their attempt to divert your attention away from his liberal voting record.

The left-of-center Texas Observer reported, in a statement dripping with contempt, that Hall eventually “got a new wife, and joined the tea party.” Yes, in 2000 Bob and Kay were married. The only thing I have to say about that is that any man who can get a woman of Kay Hall’s caliber to marry him has to be an exceptionally good man. But it gets worse: HE JOINED THE TEA PARTY. Oh no! Not the Tea Party!

There’s really only one Deuell and he’s a dirtbag who does not deserve reelection. You can’t clean up politics by electing people like Deuell who are so completely addicted to the power, income, and prestige to which they have become accustomed, that they will viciously trash the reputation of a good and decent opponent, just to hang on.

It is this very thing that discourages good people from running for office. Deuell hopes that his unbecoming behavior will serve two purposes: (1) Defeat Hall & (2) Send a message to any future challengers, who may happen to be very good people, that if they decide to run against him, their past will be picked over by vultures and used to humiliate and discredit them. What a guy!

Austin, Texas is a cesspool, and Deuell is one reason why. We can’t vote all of them out, but we can vote him out! Don’t be fooled by the Mr. Nice Guy persona. It’s an act. We need to send our corrupt Establishment a message! VOTE IN THE RUNOFF and vote for Bob Hall.

The Runoff will be held on May 27th. Early voting will be held from May 19th through the 23rd. For Kaufman County voters, locations are here & here.