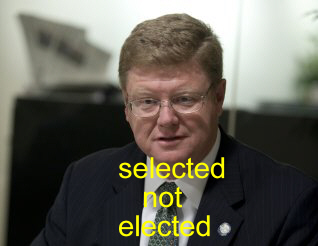 Since 1789, the U.S. House of Representatives, the Peoples’ House, has been elected directly by the citizens. In Nevada, that’s no longer true. In September 2011, the party elite of the Nevada State GOP Central Committee changed We the People to We the Party, and set a dangerous precedent by appointing its own chairman to represent the 2nd Congressional District of Nevada.

Suitably, the story of how it happened begins with infidelity.

On May 3, 2011, U.S. Senator John Eric Ensign (R. NV.), first elected to the Senate in 2000, formally vacated his office just as the Senate Ethics Committee had begun to investigate his 2007-2008 extramarital affair with a married, female staff member.

At the time, Nevada had three CDs. The map shows how the 2nd CD encompassed a majority of the land mass of Nevada, while the other two CDs covered the more densely populated urban areas.

The pending special election surfaced a generous list of candidates from both major political parties, and triggered two court battles between Nevada’s Democrat and Republican Parties.

On Monday, May 9, 2011, Mark Amodei, Chairman of the Nevada State GOP, announced his candidacy for the 2nd CD.

By the time Amodei entered the 2nd CD race, several other GOP candidates had already announced – most notably: Angle; former USS Cole Commander Kirk Lippold; and State Senator Greg Brower. All three sought support from Republican conservatives, and Tea Party organizations. Amodei did not have a reputation for being particularly conservative.

The entry of Amodei into the GOP race prompted speculation concerning back-story political motives offered by local and national media sources, including these:

Las Vegas Review-Journal, May 9, 2011: “GOP leaders who fear a victory by a Democrat or Angle — an outsider who enjoys a tea party following — have sued Secretary of State Ross Miller, a Democrat who set the free-for-all special election rules. Republicans contend that because there’s no primary, the parties’ central committees should nominate one candidate each.”

Los Angeles Times,April 29, 2011: “Sharron Angle, a former Reno assemblywoman and ‘tea party’ favorite, carried the [2nd] district in her losing 2010 campaign against Senate Majority Leader Harry Reid, and figures in much of the intrigue surrounding the special election…Angle has never gotten on well with establishment Republicans, and many were infuriated by her bumbling campaign against Reid. They hope that Miller will allow party leaders to pick their nominee, which would almost certainly mean that Angle would be passed over, perhaps in favor of Lt. Gov. Brian Krolicki, State Sen. Greg Brower of Reno, or Mark Amodei, the state GOP chairman. On the Democratic side, party leaders are hoping to coalesce behind a single candidate, with State Treasurer Kate Marshall an early favorite.”

At the outset, it was unclear as to how Nevada would conduct its first ever special election. Two courts, first the Carson City District Court and then the Supreme Court of Nevada (SCONv), were called on by the Democrat and Republican Parties to interpret the application of, primarily, two Nevada election statutes.

On May, 2, 2011, Nevada Democrat Secretary of State Ross Miller interpreted the NRS (Nevada Revised Statues) to indicate that the special election would be an open contest wherein multiple names would appear on each major party’s list of candidates on the Election Day ballot.

The Nevada Republican Party, chaired by Amodei, sued Nevada Secretary of State Miller claiming that a nominating process that resulted in just one candidate per party, exercised through the central committee of each party, was the proper interpretation of Nevada’s election statutes.

In the midst of the debate that followed, the more fundamental issue of whether or not the Nevada election statues cited were being properly used went unaddressed by both parties in the law suit, as the court’s attention focused on NRS 304.240 and 293.165.

NRS 304.240: “Procedure for filling vacancy in major or minor political party nomination or nonpartisan nomination. 1. If the Governor issues an election proclamation calling for a special election pursuant to NRS 304.230, no primary election may be held.”

This law, bypassing the primary process, was passed in response to the 9/11 attack and was intended to define the process to fill a vacancy caused by a “catastrophic” cause resulting in the vacancy of at least one-fourth of the U.S. House of Representatives. District Judge James Todd Russell ignored the legislative intent by, first, not ruling that the Governor couldn’t make such a proclamation because there was no catastrophe, and, second, by disallowing a primary. The only time the primary process is to be removed is when a catastrophe has caused the vacancy of at least a quarter of the U.S. House of Representatives.

That begs the question: Why did Governor Sandoval call for a special election in the absence of a “catastrophe”? (Might the intent have been to assure that the candidate most favorable to the Nevada GOP was selected?) In 2004, upon the recommendation of Senator Harry Reid (D. NV.), Sandoval was nominated by President George W. Bush to the bench of the United States District Court for the District of Nevada. The Governor surely would have been aware of the intent of the NRS 304.230.

This statute pertains to a vacancy in the nomination that occurs after a primary-elected party nominee drops out, or dies. In those cases, so that the party is not bereft of a candidate on Election Day, the party central committee may select a new nominee to run in the general election. In the 2nd CD case there was no need to fill the office before the 2012 election when a primary would have routinely occurred before the general election.