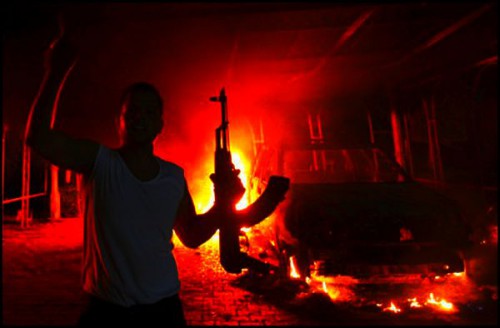 Beck Breaking News! Obama A Hit-man Or Terrorist Arms Dealer? Why He Hid the Truth of Benghazi…

Was Obama finished with our Ambassador to Libya where the Arms Trading was concerned? Did he believe Chris Stevens was going to go public with what he knew about this administrations illegal trading of weapons to the enemy? Was this like the dreadful murderous collateral damage of ‘Fast and Furious’?

Fox News has learned from sources who were on the ground in Benghazi that an urgent request from the CIA annex for military back-up during the attack on the U.S. consulate and subsequent attack several hours later on the annex itself was denied by the CIA chain of command — who also told the CIA operators twice to “stand down” rather than help the ambassador’s team when shots were heard at approximately 9:40 p.m. in Benghazi on Sept. 11.

Lt. Col. Tony Schafer told Fox News that sources were telling him that the President was watching the attack on the U.S. consulate in Benghazi, Libya in real-time. Schafer told Fox that “only the President” could have ordered backup for the Americans who were under siege by terrorists so the President was most certainly informed of the situation as it was unfolding. “I hate to say this,” Schafer said, “according to my sources, yes, [the President] was one of those in the White House situation room in real-time watching this. And the question becomes, ‘What did the President do or not do in the moments he saw this unveiling?’ He — only he — could issue a directive to Secretary of Defense Panetta to do something.” View video…

Former Special Ops officers from four separate branches of the military have joined ranks for one specific purpose — to remove Barack Obama from office.

Obama’s Taqqiya Unravels
by By Nonie Darwish on American Thinker

I have never entertained the idea that Obama was a Muslim and always believed he was a socialist. But Obama’s behavior over the last four years regarding Islam has convinced me that Obama has a Socialist/Islamic centered worldview — a combination that is not uncommon in many parts of the Muslim world. Read more…

Over the weekend, Facebook took down a message by the Special Operations Speaks PAC (SOS) which highlighted the fact that Obama denied backup to the forces being overrun in Benghazi.

The message was contained in a meme which demonstrated how Obama had relied on the SEALS when he was ready to let them get Osama bin Laden, and how he had turned around and denied them when they called for backup on Sept 11. More on Breitbart.com

A former Navy SEAL told Breitbart News on Friday that allegations of negligence during the 9/11/12 Benghazi attack exemplified Obama’s “failed policy of appeasement and apology” and was Obama’s “Watergate” with four deaths. Read more on Breitbart.com.

Central Intelligence Agency (CIA) director David Petraeus has emphatically denied that anyone at the CIA refused to assist and give support to former Navy SEALs who requested it three times, as referenced in emails that have come out, as the U.S. consulate in Benghazi was being attacked on the night of September 11. Read more at Freedom Outpost

According to this report, yesterday (27 October) Obama ordered the immediate removal of Rear Admiral Charles M. Gaouette from his command of the powerful Carrier Strike Group Three (CSG-3) currently located in the Middle East. Read more on the Tea Party Tribune

TRR: Is a General losing his job over Benghazi?

Is an American General losing his job for trying to save the Americans besieged in Benghazi? This is the latest potential wrinkle in the growing scandal surrounding the September 11, 2012 terrorist attack that left four men dead and President Obama scrambling for a coherent explanation. Read more at The Washington Times

Slain SEAL’s father to Obama: ‘Better to die the death of a hero than it is to live the life of a coward’

View video on The Daily Caller

Quite an astounding tribute to the courage and bravery of the two former Navy SEAL’s that went to the aid of Ambassador Stevens and Embassy staff. Courageous! Read more on ScottOnCapeCod’s Weblog

This video was posted by WesternJournalism.com and poses a very serious allegation which, if proven true, would amount to nothing less than treason. Will Congress investigate this? “We the People” demand answers.