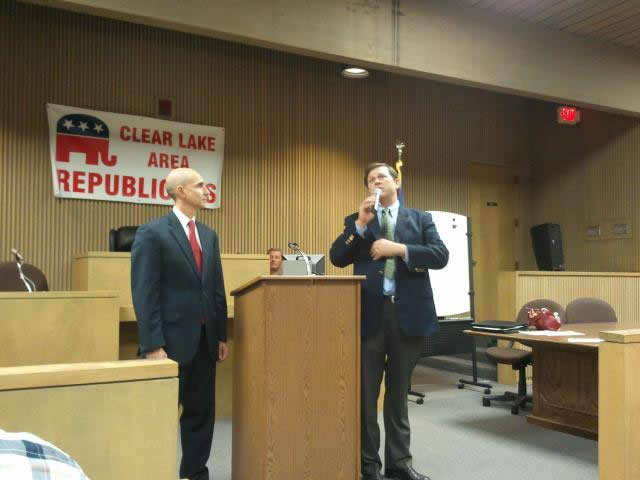 Wait! Stop me if you have heard this one before. Two Republican State Representatives hold a town hall to gather input from their constituents on Texas House leadership…Oh, you have heard this before! Well, I am not surprised because the same story seems to keep repeating in town halls across the State.

In response to the 2012 Republican Party of Texas Platform that was approved during the last State Republican Convention, some members of the Texas House have been attempting to meet the letter of the Texas Leadership Town Hall plank (2012 RPT Platform, page 5), if not the spirit. This plank calls for “the Republican members of the Texas House of Representatives after the November election, leading up to the Legislative session, to hold public town hall meetings in which the voters can express their wishes and thoughts about the leadership for the 83rd Session.” After being called out at a local Republican meeting last month, my Representative John Davis (HD-129) offered to hold a town hall last Monday to address the topic of the Texas House Speaker’s race. In addition, Representative-elect Greg Bonnen (HD-24) was also invited to make this a joint town hall between the two House districts that cover parts of Harris and Galveston County. It should be noted that this seems to be a popular tactic of Republican State Reps to hold these joint town halls whereas they support each other’s position and filibuster the questions with duplicative answers.

Make no mistake; Rep. Davis is a staunch supporter of Speaker Straus. He repeatedly espoused his position on the Speaker throughout the primary season. He has firmly and repeatedly told his constituents multiple times that he will support the Speaker. With that said, why would Rep. Davis hold a town hall to garner voter input for the Speaker’s race? His decision has already been made. Was it to really listen to his constituents about why they are requesting a change in the Republican House leadership or was it to explain away the public’s question regarding Straus and to justify why he supports re-electing the Speaker? Unfortunately, the night’s questioning only revealed the Straus talking points that you can hear at practically any other Republican State Rep town hall meant to allow the public to voice their opinions. These talking points consisted of:

The Myths of Joe Straus

Yet, wasn’t the passage of this conservative legislation the result of the Governor’s special topics and a determined group of Republican legislators who planned and executed a remarkable strategy to defund Planned Parenthood. The best that can be said about the Speaker’s role in passing this legislation was that he didn’t try to kill it in the face of a Republican supermajority. However, there are numerous examples of conservative bills being stymied by Straus Committee chairs and the most egregious being Speaker Straus’ personally blocking the TSA Anti-Groping Bill that was passed unanimously by the House both Republican and Democrat.

This less than impressive defense of the Speaker seems to be the standard Republican talking points regarding the Speaker’s race and their decision to support the moderate Republican Joe Straus. Again, it was heard as in other town halls, Rep. Davis indicated that the decision to vote for Straus was based only on his own experience and judgment. He stated that “if you don’t like the way that I vote, then vote me out.” Unfortunately, it is true. Until we can educate and activate enough people in the district to indeed vote out the Republican moderates, they will continue to throw down the gauntlet and issue this challenge back to the grassroots.

Yet, until then we can still watch, engage and make a difference. For example, Eva Brown stepped up to the microphone and asked for a public acknowledgement of a statement Rep. Davis concerning the signing of a pledge card for Straus during the 82nd legislative session. Eva has been called a “liar” by some in the district for repeating Rep. Davis as saying to her “How I vote is none of your business.” Again Rep. Davis denied making this statement. Eva then asked that if anybody was in the room that heard Rep. Davis make this remark to please stand. Six folks stood and attested to the veracity of her statement, whereby Davis spent the next several minutes asking for forgiveness in that breech of conduct.

Unfortunately, not all the questions were about the Speaker’s race. Since it takes a plank in the RPT Platform to get these State Reps out to a town hall, many constituents took the opportunity to ask other questions. Therefore, of the 18 questions asked, only 8 had to do with the Speaker’s race. One question was “Rep. Davis, with a 100% pro-life record, how do you justify supporting for Speaker, a man who claims that the upcoming 2013 Preborn Pain Protection Act is not “serious” legislation?” Davis did not directly answer the question but again reiterated that Planned Parenthood defunding and the Sonogram Bill was passed under the Speaker’s watch. Additionally, when asked about the Speaker’s non-support of the Governor’s Texas Budget Compact, Rep. Davis said he was not concerned because the Speaker will allow the House to “work its will” on such matters. Yeah right, anyone remember the aforementioned TSA Anti-Groping Bill when Straus broke House rules to personally kill it?

While Rep.-elect Bonnen was able to address non Speaker-related questions adequately, he was not able to really come up with definitive views on the Speaker’s race but did state that he was very deferential to the more senior Republican House member opinions. He also stated that he has never talked to Straus about the race. Wow, don’t you think that as a freshman legislator elected to represent your constituents that you would take the time to meet with the Speaker, study his record as Speaker, and draw your own conclusions? How easily they are assimilated.

Consequently, not a single citizen stood at the mike to defend the Speaker or congratulate Rep. Davis’ support for Straus in the upcoming Speaker’s election. Although that is not to say that there weren’t Straus/Davis supporters in the room. The audience seemed to be about 75% against the current Speaker and 25% for based on applause and crowd reactions. This town hall was not to gather the voters input concerning the Texas House Leadership. It was for the State Rep. to tell the activists and grassroots why they are wrong and to leave this kind of decision their more capable hands. While a conservative grassroots victory in the House Speaker race is indeed a long shot, forcing these guys out of the darkness, putting them on record, and eventually holding them accountable is a real “win” for the citizens of Texas who are increasingly tired of the good ol’ boy, inside baseball game of governance running this State.