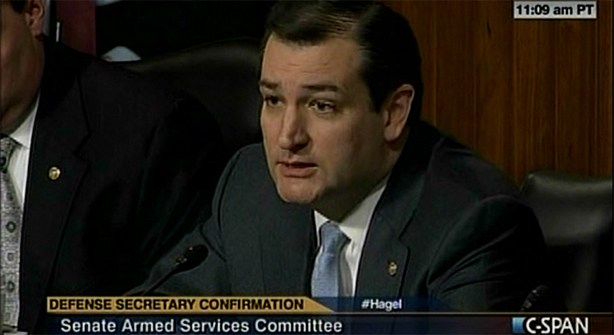 Weisman adds that, “[E]ven some Republican colleagues are growing publicly frustrated with a man who has taken the zeal of the prosecutor and applied it to the decorous quarters of the Senate.”

Oh, oh. Ted’s in trouble now. He’s embarrassing the Old Guard by being indecorously zealous. And what’s more, he’s being disagreeable, according to another prestigious news outlet.

Ruth Marcus of the Washington Post writes that Cruz “is not going to win Senator Congeniality,” adding that, “Behind the scenes, Cruz has rankled even Republican colleagues, who think he lectures too much at private party sessions — “pontificates” is one word used — and listens too little, especially for a newbie.”

Well Cruz is in even bigger trouble.  He’s more than embarrassing the old Guard – the newbie’s dissing them.

And so there it is – the Ted Cruz Gamble.

He’s gambling that he won’t put too much distance between himself and go-along-to-get-along Republican Senators – some of whom have been denizens of the Halls of Congress for decades – by representing the people from Texas who voted him into office.

Cruz was one of three Senators – all Republicans – who voted against Senator John Kerry’s confirmation as Secretary of State. What in the world was he thinking?  Kerry’s a longtime member of the Club of Current and Former Senators. Is Ted nuts?

It gets worse for Cruz.

Marcus claims that he has not only alienated some Republican Senators, he’d also “gone too far” in his latest attacks on former Republican Senator Chuck Hagel, President Obama’s nominee for Secretary of Defense.  She writes, “But he [Cruz] doesn’t have the right to smear Hagel, with no supporting evidence, with insinuations that the nominee received money from foreign governments or extremist groups.”  (But, of course, Harry Reid had the right to smear Mitt Romney with unsupported claims that Romney hadn’t paid his taxes. But then Harry is licensed to smear.)

Marcus concludes, “That there’s little he [Cruz] won’t do in pursuit of his prey.” (That certainly seems true for New Jersey Democrat Senator Robert Menendez and his prey – young girls.)

All this means that Cruz should be careful to not further alienate the liberal media establishment and risk retribution from the Republican political establishment for his “bad boy” behavior.

Perhaps it’s time Cruz adopt a be-seen-and-not-heard profile.  Put a sock in it.  Tone it down. Take a chill pill.

As a commenter recently wrote on this website, we [meaning the Tea Party] face a “golden opportunity for conservatives of all stripes to step forward and exert the same level of advocacy and influence within the [Republican] party to return it to its rightful stance.”

Advocacy and influence is the key, not “confrontational Tea Party sensibilities.”

Many of Cruz’s Republican colleagues are eager to return to conservatism, just waiting for an opportunity, awaiting the call.

So what’s called from Cruz is more friendly persuasion. More reason – less emotion.  For compromise is the fine art of politics, the Holy Grail of efficient bipartisan government.

The POTUS wants Hagel as his SecDef; so he should have him. Obama won the election, after all.

Cruz should be “wise, incremental and patient” – words from another recent commenter here – since Cruz isn’t a member of a majority party.

So Cruz should bide his time.

Meanwhile, he should walk behind the Old Guard like John “Tea Party Hobbits” McCain, and Republican Minority Leader Mitch McConnell, whose memorable line to a Tea Party-backed Senatorial Candidate who visited his D.C. office an election cycle or two back, was, “I know how (Mitch named the GOP candidate’s Democrat opponent) thinks; but I don’t know how you think.”  (Actually Mitch did know, and didn’t like it.)

Maybe it’s time Ted had a sit-down with Karl “The Architect” Rove, and dial into what it takes to make it inside the Beltway as a Republican liked by all.

The key is to not rock the boat…anyone’s boat.  And for heaven sakes, don’t act the zealot. It’s, well, indecorous.