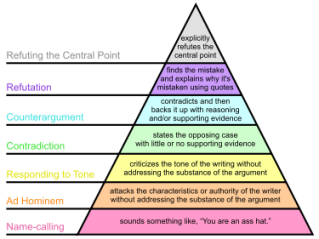 There is some immediate gratification which comes from telling a verbal bomb thrower that they are nothing more than “scum sucking, name calling bottom feeders.”  As accurate as the statement may be, it is tragically illustrative of the very behavior that prompted you to make the statement.  However, consulting Paul Graham’s chart, “The Hierarchy of Disagreement” above, you can point out that the name calling they engage in is precisely at the bottom of the chart, the lowest form of argument, which supports your claim that they are indeed scum sucking bottom feeders.  You have immediately elevated your own argument to the “Counterargument” position on the chart, the third from the highest form of argument.

The Tea Party ranks, thanks to a bout of ad hominem attacks (see argument second from the bottom) have stabilized on a small group of dedicated concerned citizens.  To maintain our effectiveness, we all have to become skilled at making convincing arguments in support of our positions.  It is to this end that I offer Paul Graham’s chart on the Hierarchy of Disagreement shown above.

The chart helps in two ways.  First it allows us to assess the level of the argument being directed at us.  If, for example, you can point out that the opposition has no substantive argument and is simply engaging in name calling or ad hominem attacks to deflect attention from the substance of your own argument, you can retain the attention and affection of your audience.  Often times, when engaged in such arguments, the person opposing you cannot be turned. In these cases, although your argument is directed at your opponent, it is more likely to influence the larger audience.

The second way this helps is to elevate your own argument.  The closer to the top of the chart your argument is found the more convincing it will be.  If you can absolutely refute your opposition’s central point, you will win the argument. Your confidence in your argument is also elevated so that when your opponent tries to distract attention from your very competent argument, and they will, rather than being drawn off personally, you will confidently return to your refutation.  Because the point is so strong, your confidence in it is high.  You can return to your point without the temptation to raise your voice or to interrupt.  It will be obvious that you are the calm reasonable one and it is your opponent who is shrill and maybe a little unbalanced.

Study the chart.  Keep your own arguments as close to the top as possible.  Recognize when your opponent is drawing from cheap attacks found at the bottom of the chart.  In these instances do not be shy to point out your opponents questionable tactics.  Then proceed at your own high level of argument.  This is civilizational battle; nothing less.  The stakes are high, the price of failure great. We must be at our highest level of competence.