Republicans hold 100 of 150 seats in the Texas State House. But as we’ve seen, the size of the majority isn’t as important as the acts of the members composing that majority.

How has GOP “safe seat” HD-15 (The Woodlands) been represented in Austin over the years? 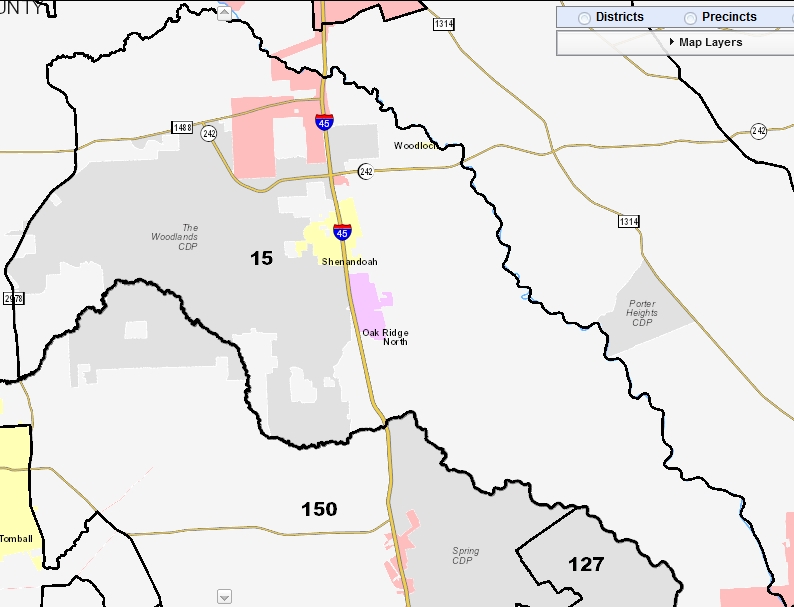 GOP voters in that district can be forgiven for thinking conservative principles have guided five-term Rep. Rob Eissler. His campaign website calls him “conservative” nine times.

HD-15 is drawn in such a way that no Democrat can win it. Rep. Eissler’s record raises the question of whether Democrats actually need one of their own in that seat.

In his first term, Rep. Eissler got aboard the Trans-Texas Corridor juggernaut (HB 3588), the massive government land grab that threatened property rights and planted the seeds of Texans’ rediscovery of limited government.

In 2005, with tax revenues surging, some in the Legislature began to address Texans’ growing displeasure over their escalating property-tax bills. Unfortunately, as HB 3 got closer to enactment, lawmakers began to realize the effort would backfire, essentially creating a new payroll/franchise tax hitting smaller businesses hardest. From the House journal:

This bill does not cure inequities in the business tax system in this state and may exacerbate them. The business tax aspects of HB 3 were originally alleged to be a “closing of the franchise tax loophole,” but in fact the bill sent to the house floor imposed a labor-intensive tax in the form of a new payroll tax. The inequities of such a scheme becoming clear to all concerned, the authors adopted amendments on the floor to try and mitigate the bill by allowing businesses to opt between the new payroll tax or a “franchise tax” option. But the option still has the effect of treating marginal, labor-intensive businesses unfairly. Large capital-intensive businesses—involving in many instances much wealthier enterprises with relatively few employees—will reap the effects of a property tax reduction windfall while at the same time not sharing equitably with small businesses in any significant new tax burden. Many small businesses … will be saddled with either a new franchise tax, or worse, a payroll tax that will serve as a significant disincentive for them to expand their employee payrolls. Even if they opt for the franchise tax, the new tax burden compared to their gross receipts will be significant. The same will not be true with many larger, wealthier, capital-intensive businesses. The bill, therefore, does not move us in the direction of a fairer business tax, nor does it truly serve to close the “franchise tax loophole,” and for that reason, I cannot vote for the bill. [Emphasis added.]

Rep. Eissler voted to advance HB 3 on numerous occasions, despite warnings from conservative critics. Fortunately the bill failed to get out of a House-Senate conference committee, sparing the state’s businesses from an even larger burden in the coming recession.

In 2007, with the economy reeling and tax revenues uncertain at best, Rep. Eissler joined Democrats in sponsoring a bill that would have set up a six-year, dual-language pilot program. Students would spend half the school day learning in their native language and half in English. This would have substantially increased payrolls in the affected schools. (HB 2814, Adopt Conf Committee Report, RV #1985, 5/27/2007, Passed 106-34-2, Eissler-AYE) The bill passed, but failed to secure funding at the end of the 2007 session.

In 2009, Rep. Eissler co-authored a bill that would have created a statewide, full-day pre-Kindergarten, a multimillion-dollar expenditure ultimately vetoed by Gov. Perry, who said state resources would be better spent on programs with proven track records that benefit more students.

In the 2011 Special Session—called to pass a budget after lawmakers failed to agree on one in the Regular Session—dozens of amendments were offered to SB 1, the state budget bill. One significant change concerned sales-tax collection, requiring certain business to prepay their sales tax—essentially letting the state extract interest-free loans from businesses. An amendment was offered to strike this language from the bill, and Eissler voted to table (kill) it. (Motion to Table House Amendment 4 to SB 1(1), RV #25, Passed 81-63, 6/9/11, Eissler-AYE) Texans for Fiscal Responsibility counted this amendment vote as one of their 2011 key votes.

Tax hikes can be indirect, as well. In 2005, Rep. Eissler voted in favor of raising fees on nursing-home residents to raise funds for Medicaid services. (SB 1863, Final Passage, RV# 821, 5/25/2005, Passed 89-53-2, Eissler-AYE) News coverage indicates that these additional fees raised the cost of nursing-home care for 2,200 privately paying residents by 6 percent, without their receiving additional services—no small consideration for families, who would ultimately make up the difference. (Source: Houston Chronicle, May 25, 2005)

It could be argued that Texas has endured the recession well in spite of Republicans such as Rep. Eissler, not because of them.

HD-15 voters displeased by such a record get only one opportunity every two years to vote on it, and then only when there’s a credible primary opponent. Tuesday will be their last chance until 2014.