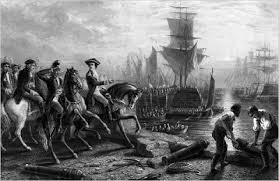 ~ by James Still ~
During the night of March 4, 1776, Washington’s troops quietly moved artillery recovered from Ft. Ticonderoga up Boston’s Dorchester Heights, along with all materials needed to construct fortifications. Upon seeing the “Works” the following morning, British General Howe is said to have remarked, “The rebels did more in one night than my whole army would have done in one month.” Here is Washington’s account:

“I resolved to take possession of Dorchester Point… which I knew would force the Enemy to an Engagement, or subject them to be enfiladed [shot their entire depth] by our Cannon… The ground at this time being froze upwards of two feet deep, & as impenetrable as a Rock… we were obliged therefore to provide an amazing quantity of Chandeliers [portable frames] and Fascines [bundles of sticks] for the Work, and on the Night of the 4th, after a previous severe Cannonade & Bombardment for three Nights together to divert the Enemy’s attention from our real design, removed every material to the spot under Cover of Darkness…

Upon their discovery of the Works next Morning, great preparations were made for attacking them, but not being ready before the Afternoon and the Weather getting very tempestuous, much blood was Saved… this remarkable Interposition of Providence is for some wise purpose I have not a doubt[.] …the Enemy thinking (as we have since learned) that we had got too securely posted before the second morning to be much hurt by them, and apprehending great annoyance from our new Works, resolved upon a retreat, and accordingly Embarked in as much hurry… and confusion as ever Troops did… leaving Kings property in Boston to the amount… of thirty or £40,000 in Provisions, Stores… [and] Cannon… Baggage Wagons, Artillery Carts, etc. which they have been Eighteen Months preparing to take the Field with, were found destroyed—thrown into the Docks—and drifted upon every Shore.” George Washington, Letter to John Augustine Washington, March 31, 1776

“[Boston]… is again open & free for Its rightful possessors… May that being who is powerful to save, and in whose hands is the fate of Nations, look down with an eye of tender pity & compassion upon the whole of the United Colonies…” George Washington, Address to the Massachusetts General Court, April 1, 1776

—
“Would it not be good policy to grant [the Boston Loyalists] a general Amnesty? & conquer these People by a generous forgiveness?” George Washington, Letter to Joseph Reed, April 1, 1776