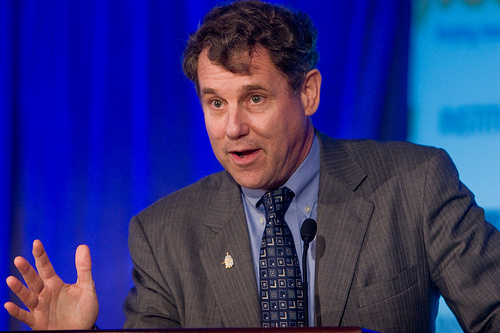 Did you know that essentially every time Sherrod Brown has the opportunity to vote in favor of preserving innocent human life, he chooses to do just the opposite?  Indeed, throughout his far-too-many years in the House and Senate, he has invariably voted not only to uphold abortion-on-demand, but to continue using our tax dollars to pay for it.

If you doubt that Sherrod places absolutely no value on the life of the unborn, just take a look at the groups who support him.  Among them:  The National Abortion and “Reproductive-Rights” Action League (NARAL), Planned Parenthood’s “Women are Watching” (WAW), and the National Organization for Women (NOW).

The folks at NARAL continually give Sherrod a 100% rating.  Why?  Because he does everything he can to maintain the right of women to end their pregnancies (up to and throughout the ninth month of gestation) for any reason — again, at taxpayer expense.

Here is NARAL’s statement of purpose, as quoted from the NARAL website: “NARAL Pro-Choice America uses the political process to elect lawmakers who share our pro-choice [i.e., pro-abortion] values and defeat candidates [like Sherrod’s opponent, Josh Mandel] who don’t . . . We are passionate about our work — and we couldn’t do our job without the great people who stand with us. That’s why Fortune magazine has described . . . [us] as one of the top 10 advocacy [i.e., pro-abortion] groups in America.”

Here is just a small sample of what the NARAL-gals — and their pal Sherrod — have so “passionately” fought against (likewise, from  the NARAL website): “Targeted Regulation on Abortion Providers,” “Restrictions on Young Women’s [minors’] Access to [out-of-state] Abortion,” “Mandatory-Ultrasound Legislation,” “Personhood Measures,” “Mandatory Parental-Involvement Laws,” the “Federal Abortion Ban,” and “The Bush Administration’s Federal Abortion Ban.”

I might add here, that as troubling as it is that Sherrod makes a habit of voting against such pro-life measures as those listed above, it is far more troubling that he voted against the “District of Columbia Pain-Capable Unborn Child Protection Act,” less than two months ago, as well as the “Partial-Birth Abortion Ban” Acts of 1995, 1997, and 2003.

The “Pain-Capable” Act sought to eliminate abortions performed after 20 weeks, when the fetus would be capable of experiencing pain; the “Partial-Birth Abortion Ban” Acts sought to eliminate the practice of “partial-birth” abortion.  Whereas the Acts of 1995 and 1997 failed to garner enough votes to become law, the Act of 2003 did garner enough votes and was signed into law that same year.

If you’re not sure precisely what Sherrod voted, time and again, not  to ban, with regard to each of the partial-birth ban Acts, here are several quotes from a presentation longtime partial-birth-abortion practitioner/enthusiast, Martin Haskell, M.D., delivered at the 1992 “National Abortion Federation Risk Management Seminar,” titled, “Second Trimester D&X, 20 Wks. and Beyond”:

“ . . . The surgical assistant places an ultrasound probe on the patient’s [mother’s] abdomen and scans the fetus” so the “surgeon” can visualize the fetus’ “lower extremities.” Then, the “surgeon introduces . . . large grasping forcep[s] . . . into the corpus of the uterus.”  Using the ultrasound image as his guide . . . the surgeon “moves the tip of the . . . [forceps] carefully toward the fetal lower extremities.  When the . . . [forceps] appear . . . on the sonogram screen the surgeon “open[s] and close[s] . . . [the forceps’] jaws” to “firmly and reliably grasp a lower extremity.  The surgeon then applies firm traction to the . . . forceps . . . and pulls the extremity into the vagina . . . With a lower extremity in the vagina, the surgeon uses his fingers to deliver the opposite lower extremity, then the torso, then the shoulders and upper extremities,” until the “skull lodges at the internal cervix os [opening] . . . At this point, the . . . surgeon slides the fingers of . . . [his] left hand along the back of the fetus and ‘hooks’ the shoulders of the fetus with the index and ring finger (palm down).”  Subsequently, the “surgeon takes a pair of blunt-curved Metzenbaum scissors . . . forces the scissors into the base of the skull . . . having safely entered the skull, he spreads the scissors to enlarge the opening.”  Then “the surgeon removes the scissors and introduces a suction catheter into this hole” to “evacuate . . . the skull contents.”   Finally, the surgeon “applies traction to the fetus, removing it completely from the patient [mother].”

Keeping that in mind, let’s take a peek at what the activists at “WAW” have to say about Sherrod (quoted from the WAW website): “With nearly 40 years of public service, Sherrod Brown has amassed a decades-long record of advancing women’s health care [i.e., women’s access to taxpayer-funded abortion].  He votes consistently on the side of women, young adults, and families . . . Now Sherrod Brown is up for re-election and needs your help to keep his job . . . He always strongly supports Title X, the nation’s family planning [taxpayer-funded abortion] program, and has stood strong to protect Planned Parenthood health centers’ ability to provide health care [i.e., taxpayer-funded abortion] through federal [i.e., tax-payer-funded] programs . . . Ohio will again be a key battleground state in the 2012 election. It’s critical that Sherrod’s allies on the ground show their support for the candidate who fights for our health and security [i.e., our taxpayer-funded access to abortion].”

My fellow-conservatives, we are not in the minority in this country, as evidenced by our massive turnout on “Chick-fil-A Appreciation Day,” several weeks ago.  So let’s stand together and repeat that type of turnout on November 6.  Yes, let’s lead Sherrod’s opponent, 100% pro-life Josh Mandel, to a landslide, no-holds-barred, victory — the likes of which Ohio has never seen.

How can we claim to truly support family values if we choose to do anything else?