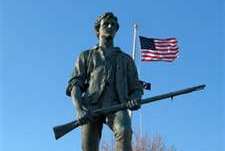 A well regulated militia, being necessary to the security of a Free State, the right of the people to keep and bear Arms, shall not be infringed.

On its face, the Second Amendment of the Constitution appears less specific and less clear than the First Amendment.  Some historical knowledge is necessary for a true understanding of our right to keep and bear Arms.

Historically, militia refers to an independent local association of men between certain ages who were trained (“well regulated”) in the use of firearms and who could be called up on a moment’s notice for the purpose of common defense.  Some states required men in this age group to maintain a musket and supplies.  Militia’s were composed of citizen soldiers, farmers and tradesmen and preferred to standing professional armies which historically had been used by rulers and tyrants to subjugate people.  A militia was seen as a counter to an army and a guarantee of a citizen’s liberty.  Your Second Amendment right insures all your rights.

Too often we see the Second Amendment defended as a concession to gun “hobbyists” and hunters.  This is ludicrous.  One does not “bear arms against a rabbit.”  To be sucked into this defense of our rights leaves us at the mercy of PETA pandering politicians.  We refuse to cower in our closets while thugs rob our homes and threaten our families.  Criminals are always in a hurry because they know there is a response time.  However, they went into this profession because they know there is a response time.  An armed citizen drops the response time to zero.  Remember, when seconds count, your local police are just minutes away.

The lack of specificity is intentional.  It is not just congress, but anyone and everyone, state and local government, who is prohibited from infringing on our right to keep and bear arms.  This right protects us equally against threats both criminal and political.  The only ones who wish to infringe upon this right are the political and criminal classes and there may be some overlap here.

The left claims that we in the heartland often “cling to God and guns.”  Well aren’t those the First and Second Amendments?  And as Americans should we not only cling to these rights, but also defend “with our lives, our fortunes and our sacred honor,” these founding principles?
~ Terrell AronSpeer,

The founders, in establishing this new form of government, asked themselves not how they could secure this power for themselves and their progeny, but how they could keep themselves from becoming just like the oppressive government they sought to replace.  They wanted to know what mechanism they could put in place to stop themselves if they were to follow this historically ever deepening rut.  I know of no clearer demonstration of the character of these extraordinary men than the inclusion of the Second Amendment in our Constitution.