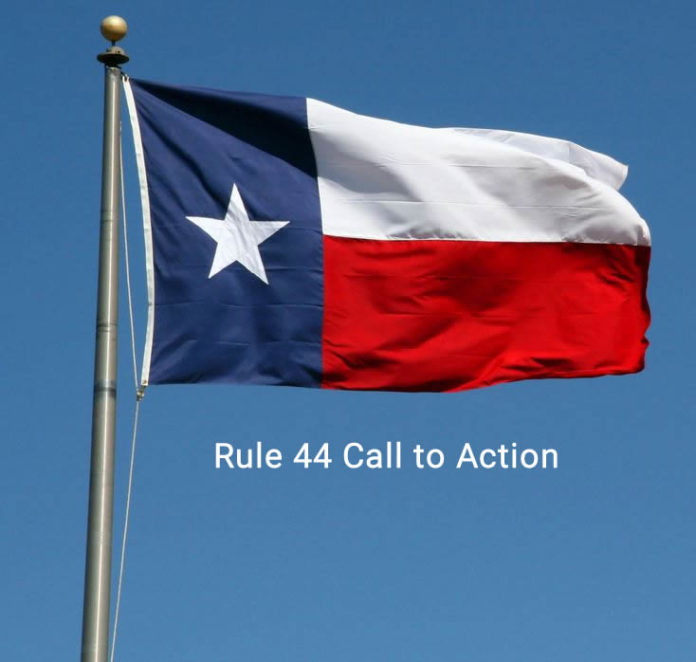 At the Texas Convention, we have an immediate grassroots call to action regarding Rule 44 and we need your help. Please read and reach out to your networks.

Rule 44 was strengthened last night.  It now has teeth.  It passed our committee 11-10.  Really close.  Here’s the language that passed:

Rule No. 44 – Censure Process and Penalties

A County or Senatorial District Convention or a County or District Executive Committee may by a two-thirds (2/3) vote of those present and voting. adopt a resolution censuring a Republican public or party office holder representing all or a portion of that County or District for three (3) or more actions taken during the current biennium in opposition to the core principles of the Republican Party of Texas defined in the Preamble of the Party Platform as described in Rule No. 43A.

Such a resolution may include a request to the SREC or any State Convention held prior to start of the filing period of a Republican primary election while these rules are in effect, or SREC that the named office holder be penalized. If such a request is included, the delegates of the State Convention by majority vote in the case of subparagraph (1) below, or by a three-fifths (3/5) in the case of subparagraph (2) below, or the State Republican Executive Committee by a two-thirds (2/3) vote of the full membership, may vote to concur with the resolution of censure and impose one or both of the following penalties:

Okay, here’s what this is.  It adds teeth to Rule 44.  The red language above shows the changes from the 2018 Rule 44.  The 2018 provision remains intact (black text above), and the additional proposed 2020 sanction (red text above) prevents them from running in the next Primary.  This is huge!

There are folks who absolutely don’t want us to be able to hold legislators and other elected officials accountable to their commitment to follow our core principles.  Some of the people who voted against Rule 44 — Kathy Haigler, Fred Tate, Fernando Trevino, Sandra Kindt, Mike Bergsma, and a few others.

Today in your SD caucus, you are voting for your Permanent Rules Committee member.  If you care about keeping this tool to hold your elected officials accountable, then you absolutely must put someone on that committee that supports Rule 44.  Find someone to nominate that supports Rule 44!!   If your person who wants to be on the Permanent Rules Committee won’t emphatically support it, then NOMINATE SOMEONE ELSE FROM THE FLOOR AS SOON AS IT’S OPEN!!

NOTE: Due to technical difficulties with RPT software, the permanent rules committee members have not yet been nominated or voted on as of 7/16/2020 at 3:48 PM. So please continue lining up candidates who will defend Rule 44 in every SD to be voted on shortly.

P.S.  PLEASE FORWARD THIS FAR AND WIDE IMMEDIATELY.  THANK YOU.