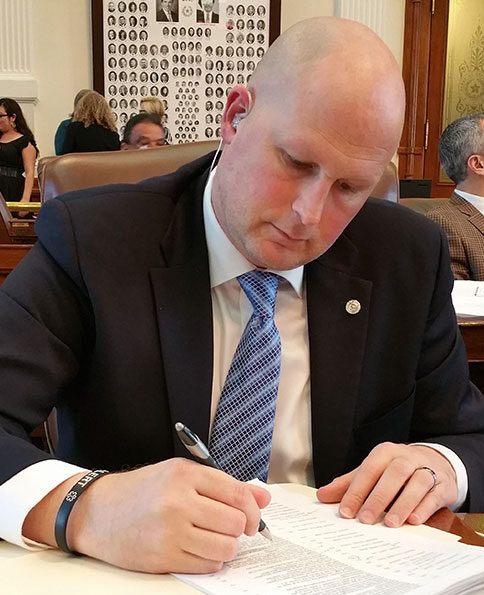 Texas conservative Representative Tony Tinderholt is the first official challenger of incumbent House Speaker Dade Phelan. Texans for Fiscal Responsibility rates Tinderholt at a 92, Young Conservatives of Texas a 98, and Texas Right to Life a 100. Tinderholt has consistently been rated as one of the most conservative representatives in Texas.

Dade Phelan was not rated by Texans for Fiscal Responsibility or Young Conservatives of Texas since Phelan was the Speaker of the House and did not vote on legislation. However, Texas Right to Life rated Phelan at a 60. Phalen was elected Speaker with the overwhelming support of Democrats.

Representative Tony Tinderholt Files for Speaker of the Texas House

(Arlington, TX) On Friday, a few days out from an election where Republicans are expected to remain in control of the Texas House, Representative Tony Tinderholt filed paperwork to launch his bid to lead the lower chamber of the Texas Legislature.

“Will the priority legislation of the Republican Party of Texas receive a vote on the Texas House floor? The truth is, we have no idea with our current speaker in control. In fact, most Republicans will tell you that they fully expect many important Republicans policies to die at the hands of liberal committee chairs appointed by Speaker Phelan.

Over 80% of Texas GOP voters (Proposition 6, March 2022 primary elections) have asked the legislature to pass a rule ending the practice of handing over significant power to Democrats through committee chairmanships, a rule which Phelan has continued to oppose. In conversations with many members of the Texas House it was revealed that some of them haven’t had a one-on-one conversation with our current speaker since the end of special session last year. It is clear that Texas Republicans need new leadership who will fight for our values. I am running for Speaker of the Texas House to ensure we do the will of our voters and make Texas an even better state.”

Tony Tinderholt has served in the Texas House since 2015 and has consistently been ranked as one of the most conservative Republicans in the chamber. He has consistently supported Republican priority legislation. He is a combat veteran, father of 4 and husband to Bethany. He originally ran for office against a Republican incumbent who wasn’t supporting party policies. He has continued to push his peers to work as a team in passing Republican priorities without using Democrats as leverage to become Speaker of the Texas House.