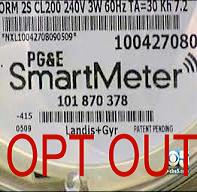 First, the deployment was never mandatory; therefore, paying to opt-out of a non-mandatory action is irrational and illogical. It is a punitive disincentive to choosing what is best for the individual, whether it relates to health concerns, privacy, or security.

Second, the basis for health concerns is widespread. There are now over 6,000 peer reviewed submissions that have been published showing the potentially harmful effects of exposure to RF radiation from wireless digital transmission at levels far below the thermal activity. The so-called standards of safety for the often quoted FCC guidelines date back to 1986 and are ”not protective of public health” according to the Radio Frequency Interagency Working Group (FDA, OSHA, EPA and FCC).  The World Health Organization (WHO) International Agency for Research on Cancer (IARC) now lists this RF as a possible human carcinogen.  The American Academy of Environmental Medicine has issued warnings about reducing exposure levels of non-thermal RF transmissions in many individual cases and has said, “Adverse health effects from wireless radio frequency fields, such as learning disabilities, altered immune responses, and headaches, clearly exist and are well documented in the scientific literature. Safer technology, such as use of hard-wiring, is strongly recommended in schools.” And finally, in a June 2012 letter, 54 MD’s and PhDs made a compelling case for concern regarding the health risks and effects.  Increasingly, it is only the studies funded by the wireless companies that find the effects relatively benign, much as was the case with cigarettes for many years.  Yet in the case of cigarettes and with far less data than is available today on RF, no one suggested people should have to pay a fee for NOT smoking.  It is ridiculous for a government to assert people should pay extra to avoid a health hazard with this much evidence behind it.

Fourth, Electric transmission and distribution utilities (TDUs such as Oncor, CenterPoint, AEP, TNMP) have a regulated monopoly, with no options or flexibility as one would have in a free market exchange; therefore, opt out fees are incompatible with this business model. Contrast this business model and forceful deployment of smart meters to the cell phone industry’s business model. Cell phones were developed and deployed in a free market exchange, to which only the wealthy or tech-savvy had initial access. As new technology led to improved user-friendliness and better service plans, and as the costs decreased over time, more consumers freely bought into this technology. No one was forced to buy cell phones, nor were they penalized for not buying them.

Fifth, an opt out fee is discriminatory because only the wealthy have the option of separating themselves from the smart grid network, albeit, only partially*. Those who would be challenged to pay the opt out penalty include the elderly, the disabled, those on a limited or fixed income. Worse yet, many of these classes of people are the ones who are potentially most vulnerable to RF related issues.

Sixth, opt out costs negate the competitive nature of the free market when property owners, who prefer not to take on the liability of personal injury or intellectual property vandalism, have to increase their rates. These property owners would be forced to pass on the cost of opting out to their tenants (apartments, hotels, retail centers, or other high density living spaces), thereby, making their pricing structures artificially higher than their competitors who don’t opt out.

Seventh, opting out does not require a meter reader. As has been done in many other cases, the TDUs could transmit electric consumption over existing phone lines or power lines, which would also be much more secure than wireless transmissions and much safer by eliminating RF exposure. In fact, in many cases this landline technology is what was removed from a house when the Smart Meter was installed.

And last, is it possible that an opt out charge is discriminatory against minorities? The Executive Director of the PUC referred to those of us who want to opt out as a “discreet, small number of people.” Discrimination against minorities is as taboo as it gets. What politician wants to claim that moniker as his own?

*Opt Out is only a partial remedy to the forceful smart meter deployment. Turning off one’s own radio transmitter doesn’t protect the individual from the matrix of radio frequencies emanating from the larger smart meter network. Nor does it alleviate the bigger problem of a central bureaucratic unelected agency or commission controlling the entire value chain of generation, transmission, distribution, storage, and end-use of electricity. The current version of opt out is only one option (no others have been explored by the utilities) and is so inconsequential that is does not justify charging the consumer any amount.

No basis can be found to justify paying for a consumer’s right to not participate in a regulated monopoly’s technological deployment where no statutory mandate exists. The  socialized cost of the deployment, the discriminatory and punitive nature of the charge, and the hindrances to free market competition leave no doubt that an opt out charge is indefensible.