American Basketball Superstar LeBron James was recently feted with a one-man parade of appreciation and celebration attended by thousands of Chinese residents of Xinjiang Province.

While visiting the city of Urumqi, LeBron played an exhibition game against an All-Star Chinese Basketball Team representing teams from throughout the Peoples Republic of China (PRC).  Premier LeBron singlehandedly defeated the All-Stars 106-14. 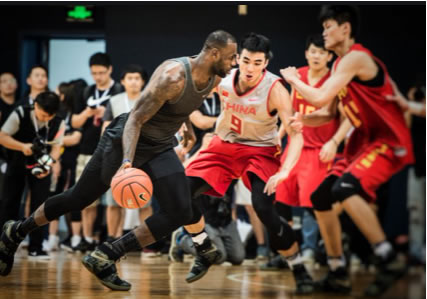 The game was sponsored by the provincial CCP (Chinese Communist Party) politburo. Due to its overwhelming support from Chinese, the CCP remains the sole political party throughout all of China.

In a post-game interview, a visiting sports journalist from America asked LeBron if he was aware of the many Uyghur Muslims jailed in a huge re-education camp in Xinjiang Province because of their religion.  LeBron said, “I am very impressed by the enthusiasm that young Chinese people have toward the game of basketball, and I foresee a future when China will have a team playing in the NBA, which will have to be renamed – the World Basketball Association.”

Another Western reporter asked LeBron what he thought of the on-going protests in Hong Kong.  The giant basketball superstar said, “Well, I think it was wrong for an official of a U.S. NBA team in America to comment on affairs in China. Public disorder and destruction should not be tolerated by any government, anywhere, and China has a duty and a right to maintain law and order in Hong Kong. After the government of Japan deeded the city back to the Peoples Republic of China a few years ago, it became their territory.”

LeBron’s response to indiscrete comments, recently made by an American basketball official who was critical of the police crackdown on riotous street thugs in Hong Kong, were well-received by his many loyal Chinese fans, as was evidenced by the overwhelming turnout to his one-man parade.  A big parade for a big basketball man.

Party leaders attending the parade were recognizable by the t-shirts specially made for the occasion. For non-Chinese readers, the captain beneath LeBron’s photo reads, “Premier of Chinese Basketball”. 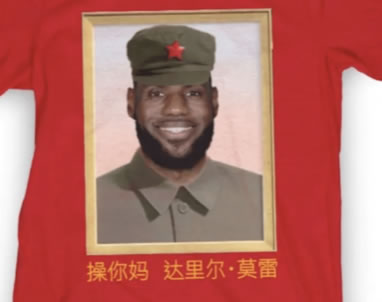 Be sure and read our latest satire piece: Pajama Boy Outed as CIA Whistleblower