Carlos Delicto, Traveling with the Biden campaign in Iowa

Breaking News: Confidential sources inside the Biden campaign traveling with the former Vice President in Iowa report that they’re in communication with former Republican Speaker of the House Paul Ryan discussing the possibility of Ryan joining John Kerry as an additional back-up political personality to support Biden.

It’s no secret in Washington D.C. that Ryan is no fan of President Trump, and did little during his time as Speaker of the House of Representatives to support the new President’s agenda.  When he counseled Republican House members to “vote their conscience” in the 2016 Presidential Election Ryan, essentially, disassociated himself from a Trump Presidency.

Biden staffers believe that the presence of former Senator and Secretary of State John Kerry added gravitas to the Biden campaign in Iowa by traveling with Biden on his “No Malarkey” bus.

Now they hope to add Ryan to the tour by making a place for him on-board to display bi-partisan support for their candidate.

When asked for a definition of “Malarkey,” Biden staffers, all in their late twenties, shrugged, looked at each other, and said, “Well, we’re not sure, but his supporters over 70 seem to understand it.” 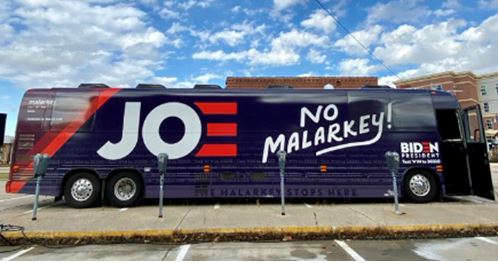