Once sad, Ben Rhodes, now glad to offer himself to an elite branch of the U.S. Armed Forces

This is a tale of two Rhodes. A road once taken to a dead end, and a new road he hopes to take forward and up.

His first road ended in sadness and defeat. A supporter of Hillary Clinton, with her victory he knew he would be on his way to the job of National Security Advisor, and, perhaps someday, the role of Secretary of Defense.

Ben (left below) had once worked closely with the former President and Vice President in the White House, where he had the confidence of both national leaders. 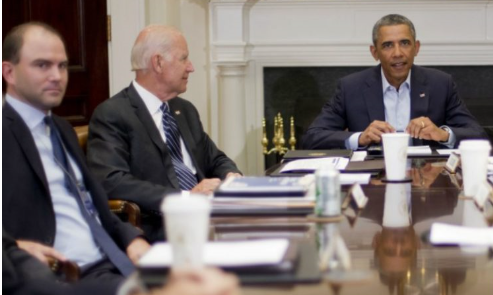 Ben, back then, was on the road to becoming a political legacy as a young Deputy National Security Advisor for Strategic Communications in the Obama administration.

His brother, David Rhodes, is a former President of CBS News. He was once the youngest network news president in the history of American television.

Younger brother Ben was chasing his own star.  Right up to the night Donald Trump was elected POTUS.

Since that evening, when he sat mournfully alone on the concrete steps contemplating an unknown future, Ben has been in recovery. Until last week.

At a press conference he held in a Motel 6 near his D.C. home, Ben announced, before a press gaggle of three cub reporters representing MSNBC, CNN, and The Hill, that he will offer his Deputy National Security Advisor experience to strengthen the armed forces of the nation.

In a brief statement he said:

“Since election night 2016, I’ve been wallowing in a deep purple funk. Struggling not only to understand what happened, and why she lost to the Orange Man, who is an asset of the Russian Intelligence apparatus that I knew so much about when I worked in the White House, but to find my place in the future of America.  I’ve decided to take my national security knowledge and experience and offer it to the United States Marine Corps as an enlistee. I’ve requested that they accept me, upon my enlistment, as a Major in the Corps and assign me to the Office of the Marine Corps Commandant in the Pentagon where I can call upon my experience in the White House as a Deputy National Security Advisor. I’m ready to move on, and, hopefully, up.”

No one in the Office of the Commandant of the USMC was available to comment on Rhodes’ announcement.

The Senior NCO in the USMC Recruitment Office in Washington, D.C., when told of Rhodes’ statement and asked for a comment, merely smiled.