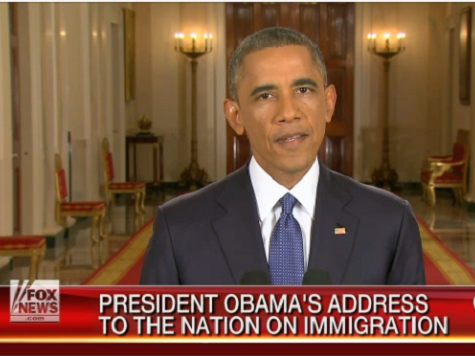 Obama’s proclamation of amnesty to illegal aliens is just the latest step in a long-running war conducted by Democrats against American citizens of African descent.

But, there are early signs that the African-American community is waking up to the decades-long, false claim by Democrats, heralded since the Civil Rights Act of 1964, as being the political party most concerned with the condition of Blacks.

Obama’s dictatorial edict granting functional amnesty to millions of Hispanic illegal immigrants is not being well-received by some African-Americans who feel betrayed by the first Black President.

Perhaps now they’ll pause to glance back over the last 50 years and compare Democrat promises made to the “Black community” – in exchange for their votes – against historical outcomes in the freedoms generously bestowed by Democrats on African-Americans.

The Freedoms to be the Lowest Paid, and Most Unemployed & Impoverished Americans

In August 2013, a Washington Post article – not a FOX News piece – listed economic factors among Blacks in an article entitled, “These ten charts show the black-white economic gap hasn’t budged in 50 years.” The list includes:

“For the past 50 years, black unemployment has been well above recession levels.”

“The gap in household income between blacks and whites hasn’t narrowed in the last 50 years.”

“In fact, the wealth disparity between whites and blacks grew even wider during the Great Recession.”

“The black poverty rate is no longer declining.”

“Black children are far more likely than whites to live in areas of concentrated poverty.”

“Our schools are more segregated today than in 1980.”

The WaPo piece was written four years and seven months after Obama’s inauguration.

“Sadly, the legalization of millions of new immigrants could make all these problems worse, particularly for Latinos already here and millions of African-Americans.”

Not only “could” amnesty make matters worse for African-Americans, it surely will.

In 1965, the late Daniel Patrick Moynihan (1927-2003) wrote “The Negro Family: The Case For National Action.”  That landmark document can be read here.  Below is a portion of his introduction to the work (the key paragraph is highlighted):

“The most difficult fact for white Americans to understand is that in these terms the circumstances of the Negro American community in recent years has probably been getting worse, not better.

Indices of dollars of income, standards of living, and years of education deceive. The gap between the Negro and most other groups in American society is widening.

The fundamental problem, in which this is most clearly the case, is that of family structure. The evidence — not final, but powerfully persuasive — is that the Negro family in the urban ghettos is crumbling. A middle class group has managed to save itself, but for vast numbers of the unskilled, poorly educated city working class the fabric of conventional social relationships has all but disintegrated. There are indications that the situation may have been arrested in the past few years, but the general post war trend is unmistakable. So long as this situation persists, the cycle of poverty and disadvantage will continue to repeat itself.

The thesis of this paper is that these events, in combination, confront the nation with a new kind of problem. Measures that have worked in the past, or would work for most groups in the present, will not work here. A national effort is required that will give a unity of purpose to the many activities of the Federal government in this area, directed to a new kind of national goal: the establishment of a stable Negro family structure.

This would be a new departure for Federal policy. And a difficult one. But it almost certainly offers the only possibility of resolving in our time what is, after all, the nation’s oldest, and most intransigent, and now its most dangerous social problem. What Gunnar Myrdal said in An American Dilemma remains true today: ‘America is free to chose whether the Negro shall remain her liability or become her opportunity.’”

Moynihan, who went on to become a Senator from New York, got the problem right.

President Lyndon B. Johnson got the solution wrong.  Johnson’s solution was to expand the welfare state and wrap the black community in a cocoon of, what turned out to be, perpetual entitlements.

Consequently, the welfare state has helped to further deteriorate the structure of the black family.

Now, Obama has extended the welfare state to non-citizen, illegal immigrants – a move that will further damage the African-American community.

Why would Obama and the Democrats do this?

In order to sustain their political viability, the Democrat Party desperately needs a new, reliable base of support.  Not financial support – Hollywood and select billionaires remain loyal – but support on Election Day, at the polling places.  And what better way to enhance that base than by importing millions of new voters who will, in graditude, dance with the ones who brought them.

And if, as a consequence of importing a new underclass of malleable voters, the economic situation of many Black Americans is further damaged, so what?  As subsequent elections roll-by, Democrats need only continue to blame Republicans – and particular Tea Party conservatives – as being those responsible for plight of the black community.

To support that Democrat meme, there remains a cadre of Black members of the House of Representatives who have life-time tenure in their gerrymander districts that elect them term, after term, after term (e.g., Charlie Rangel, Maxine Waters, Hank Johnson, Brenda Lee Jackson, and John Conyers).

And the beat goes on, as black Democrat political overseers in the asphalt plantations of the Big Blue Cities will keep their constituents voting Democrat.

That is unless the few Black Americans feeling betrayed today by the Democrat party becomes the many.