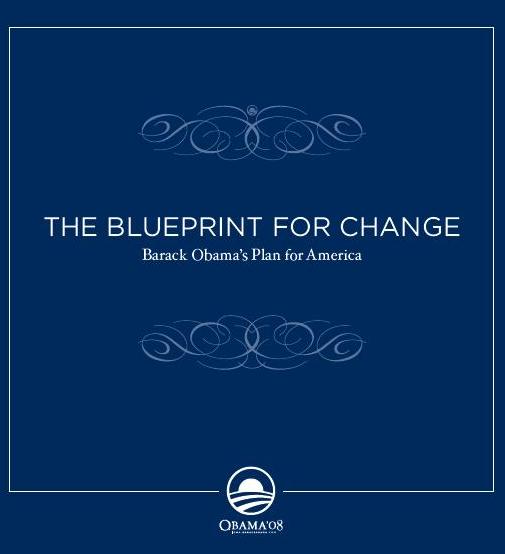 In the first Presidential debate, President Obama criticized Mitt Romney for not stating his, Romney’s, plans for America. Romney is wise not to fall into that trap.

Obama offered an extensive plan in 2008 entitled “THE BLUEPRINT FOR CHANGE: Barack Obama’s Plan for America”.  The liberal media never questioned it.

‘The cost of our debt is one of the fastest growing expenses in the federal budget. This rising debt is a hidden domestic enemy, robbing our cities and states of critical investments in infrastructure like bridges, ports, and levees; robbing our families and our children of critical investments in education and health care reform; robbing our seniors of the retirement and health security they have counted on. … If Washington were serious about honest tax relief in this country, we’d see an effort to reduce our national debt by returning to responsible fiscal policies.’

Obama will reinstate pay-as-you-go (PAYGO) budget rules, so that new spending or tax cuts are paid for by  spending cuts or new revenue elsewhere.

Obama will cut skyrocketing pork barrel spending projects by forcing more transparency about who is requesting projects and what the projects would accomplish before Congress votes to approve them.

Cut Down on Tax Haven and Tax Shelter Abuse

Obama will build on his bipartisan work to penalize companies that abuse the tax code and stop the use of tax havens.

Obama is committed to repealing the Bush tax cuts for the wealthiest Americans.

Under President Bush, the federal debt has increased from $5.7 trillion to $8.8 trillion, an increase of more than 50 percent.

President Bush’s policies of giving tax breaks for the wealthy will cost the nation over $2.3 trillion by the time they expire in 2009.

Reinstate PAYGO Rules: Obama believes that a critical step in restoring fiscal discipline is enforcing pay-as-you-go (PAYGO) budgeting rules which require new spending commitments or tax changes to be paid for by cuts to other programs or new revenue.

Reverse Bush Tax Cuts for the Wealthy: Obama will protect tax cuts for poor and middle class families, but he will reverse most of the Bush tax cuts for the wealthiest taxpayers.

Cut Pork Barrel Spending: Obama introduced and passed bipartisan legislation that would require more disclosure and transparency for special-interest earmarks. Obama believes that spending that cannot withstand public scrutiny cannot be justified. Obama will slash earmarks to no greater than what they were in 2001 and ensure all spending decisions are open to the public.

Obama will also increase the efficiency of government programs through better use of technology, stronger management that demands accountability and by leveraging the government’s high-volume purchasing power to get lower prices.

Obama has called for an end to subsidies for oil and gas companies that are enjoying record profits, as well as the elimination of subsidies to the private student loan industry which has repeatedly used unethical business practices. Obama will also tackle wasteful spending in the Medicare program.

End Tax Haven Abuse: Building on his bipartisan work in the Senate, Obama will give the Treasury Department the tools it needs to stop the abuse of tax shelters and offshore tax havens and help close the $350 billion tax gap between taxes owed and taxes paid.

Close Special Interest Corporate Loopholes: Obama will level the playing field for all businesses by eliminating special-interest loopholes and deductions, such as those for the oil and gas industry.”

Instead of restoring “fiscal responsibility” Obama led the nation to the Fiscal Cliff.

It’s hard to avoid the conclusion that outcome of his fiscal policies are not intentional, given that he’s the smartest President in the history of the United States of America.