“JACKSON, Miss. — Senator Bernie Sanders insists he hasn’t decided whether to run again for president, but a 14-hour sprint across the Deep South on Wednesday made clear that he is not only thinking about it but is already trying to remedy his most significant vulnerability in 2016: his lack of support from black voters.

Mr. Sanders began the 50th anniversary of the Rev. Dr. Martin Luther King Jr.’s assassination with a morning speech and a march in Memphis, helpfully captured in a picture on the Rev. Al Sharpton’s Twitter feed. He appeared at an economic justice forum here in Mississippi’s capital, speaking before a crowd that included far more African-Americans than his campaign events typically drew. And he wound down over a plate of wings at a late-night dinner with Chokwe Antar Lumumba, Jackson’s new mayor, a 35-year-old African-American and progressive.

Even more than recapturing the magic of 2016 in the early nominating states, Mr. Sanders’s prospects in 2020 would hinge in large part on whether he could garner far stronger support from African-Americans than the less than 20 percent of the vote that he won from them in Southern states.”

Sources close to the Bernie in 2020 Campaign report that his presence at the Jackson, Mississippi event is only the first in an upcoming series of African-American (A-A) events that Sanders will attend before the November 2018 midterm elections.

Sanders is scheduled to perform somewhere on National Dashiki Day (NDD), October 30, “a day of cultural celebration to the colorful garment that was adopted by African-Americans in the 1960s and 1970s as a symbol of pride, awareness, independence, and power.”

Although it’s not yet finalized, this year’s upcoming NDD gala celebration may be held in the city of Montpelier, capital of Vermont – although the A-A population of Vermont is 1.3% of the total residents.

Montpelier hopes to promote the Annual NDD gala based on the premier performance of a new band, Bernie and the Blacks, that highlights the state’s favorite son.

Following a recent headline on the Drudge Report (see above), and pivoting off an Elton John hit song released in 1974 and titled “Bennie and the Jets” (Video of a John’s performance here), Sanders and his new band, Bernie and the Blacks, will perform their version of John’s song at the 2018 NDD celebration, sung to new lyrics (original lyrics here).  Here are the band’s new lyrics:

Hey there, shake it lose together,
The spotlight’s hitting something
Been known to change the weather
We’ll shame the fatted Trump tonight
He’s such a clown
You’re gonna hear electric music
A solid wall of sound

Hey there, don’t plug into the faithless
Maybe they’re blinded
But Bernie makes them ageless
We shall survive let him take us all along
Where we fight the Trumpsters out in the streets
To find out who’s the left and who’s wrong

Chucky and Nancy, have you seen them yet
Uh, but…

While Bernie’s musical talents are largely unknown outside of Vermont, they are legendary in his home state. 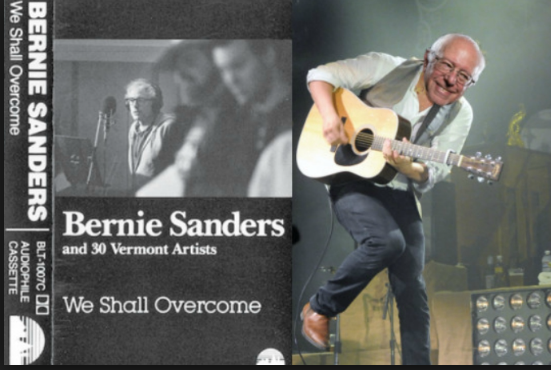 Although Sanders 2020 Campaign staffers cannot yet name all the artists performing with Bernie and the Blacks, they claim that the Reverend Al Sharpton will play sax in the back-up band.