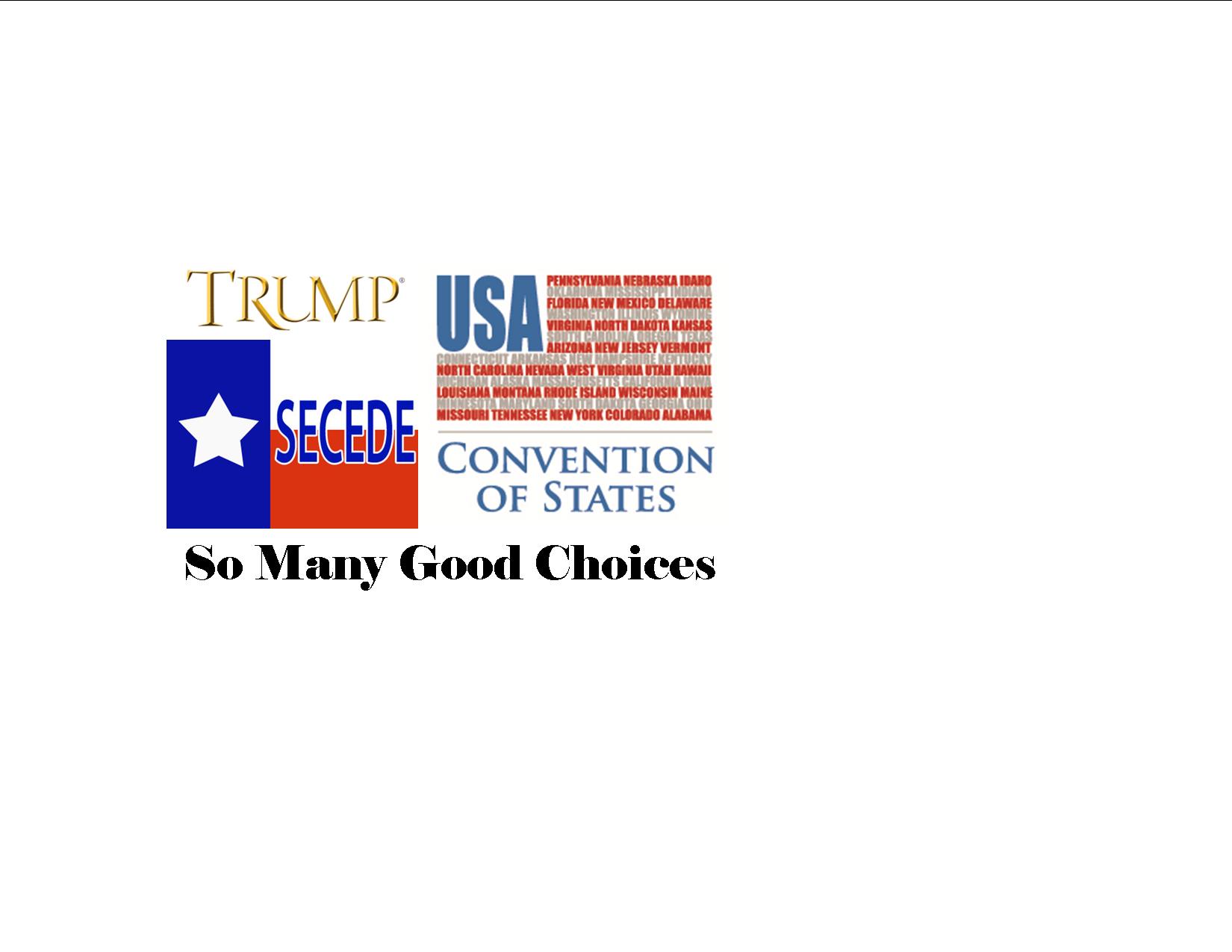 (Posted just hours before the inauguration of Donald Trump)

There have not been so many good options for conservatives since the Republican primaries.  With Hillary’s star fading, many of us have noted a feeling as if a great weight has been lifted from the nations shoulders.  However, I am afraid things might slow down for the Texas secessionist movement.  The good news is California is talking about seceding.  But if California were successful in this, it might make Texans less motivated to secede.  There is nothing wrong with Texas secession, but the election of Trump has taken a little of the wind off their sails.

Trump’s election has even his conservative detractors willing to take a wait-and-see attitude.  Honestly, Trump was not my first choice either, but he was way up there, around sixteenth or seventeenth as I remember.  Although I was seldom pleased about Donald Trump as a candidate, honesty demands I say that as a “President Elect,” he is one of the best.  It is amazing how the Obama apologists in the press immediately demanded that Trump fix all that has gone wrong in the last eight years before the man is even sworn in.  Where were they keeping all this concern?

Trump’s track record so far is good.  He has put together a slate of cabinet appointments that overall has exceeded my expectations and assuaged my fears.  His tepid support for Israel during the campaign created no expectation that he would support Israel diplomatically.  He really stepped up in an unprecedented way for a president elect and it gives me hope for the future.  It was as if he had a ‘road to Damascus’ moment that he was either incapable of articulating or untrusting of the American peoples’ ability to understand.  I hope we will see additional modifications of policy statements in other areas where he has seemed determined to distance himself from conservatives.  I am depending on Mike Pence to train him up in conservative philosophy.

Many have placed great faith in Trump.  My fear is that many will relax into an attitude that, “Now it is all taken care of” – that there is nothing else we need do.  This would be a fatal error.  History tells us that when the left is through crying in their beer, they will be back with a vengeance.  The observant will note that this has already started.  This is why, at this moment, with the wind at our back, we need a full court press on a Convention of States.

Many of the Republican Congressmen in Washington this term have been there some time.  They have already been corrupted by the system.  We cannot wait for Donald to send them to rehab.  For six years they promised to “repeal and replace.”  Other than lip service and empty gestures, we got nothing.  There are six or eight who can be counted on, but the rest are just career politicians who would switch party affiliation if the political winds favored it.

We the people must mobilize and strike while the iron is hot, while the wind is at our back or just fill in your own favorite cliché here.  Yes I’m old, probably older than you and I am tired too, but we must not lose this momentum. We do not know how Trump will respond to power.  We do know it is very seductive and corrupting.  But from what we have seen, it is just possible he will be a great ally in this fight.  It is now, with this momentum that we must put the reins on this beast.  The Convention of States organization is perfectly positioned to take advantage of this moment in history.  We have never had a better opportunity to reduce the size and scope of this oppressive federal government.  Get involved as fast as you can.   http://www.conventionofstates.com/