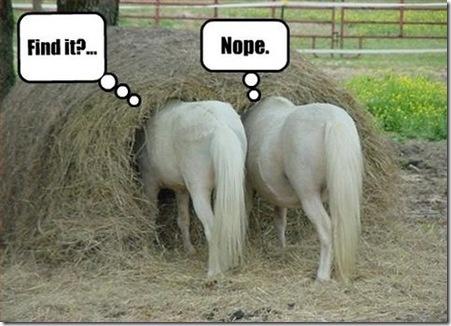 “Needle in a haystack,” is a phrase we hear a lot recently, usually in relation to the FBI’s attempts to identify potential terrorists.  Not only do I find this analogy unsatisfying, I believe using it actually creates expectations the agency is unlikely to be able to meet.  In a word, it is counterproductive.  Let’s take a look at the common phrase, “It’s like looking for a needle in a haystack” to see if we can identify the problem and find a more accurate analogy.  I believe in doing so, a more effective solution to the problem of Islamic terrorism may become apparent.

First of all, “Looking for a needle in a haystack” is supposed to conjure up feelings of hopelessness and despair.”  I am not a fan of these feelings and I think way too many of us are willing to throw in the towel at such a prospect.  The sheer volume of the haystack and the relatively diminutive nature of the needle are designed to discourage us.  But consider this; hay is a dull yellow brown and the needle a bright, shiny, chrome-plated sharpness.  The distinction between hay and a needle is significant and obvious.  A thorough visual search should be sufficient to yield an unquestionable success; it would just take some work.  Poor FBI!

Off the top of my head, I can think of two ways to simplify the task and quickly separate the needle from the haystack.  FIRST, elevate and lay on its side the type of electro-magnet which is used to lift semi-trucks in wrecking yards.  Next, drop the haystack in a thin steady stream in close proximity to the electro-magnet.  At the end of this process you should have a haystack on the ground and your needle firmly attached to the electro-magnet.  A SECOND effective, but less high-tech approach would be to place a lit match in the haystack.  When the whole thing is reduced to ash, use a fan to blow away the light ash, leaving the possibly melted needle on the ground.

In truth, the dilemma the FBI faces is much greater than locating the needle in the haystack.  It is not like the terrorist is coated in shiny chrome.  He looks eerily similar to every other Muslim of Middle Eastern extraction in his neighborhood.  In fact, there is no apparent distinction until the terrorist is surrounded by blood and bodies.  And can’t we all agree it is a little late by that time.  The FBI’s considerably more difficult task is like finding a specific piece of hay in a haystack.  All of the hay conspires, by its very presence, to hide the single stalk of straw one is seeking.  In truth, hay is unlikely to consider this; however, it has to be painfully obvious to a human.  For their own safety, you would think they would happily give up the offender in their midst, unless of course they were sympathetic to his cause or felt some sort of kinship or allegiance to the offender.  It is as if they had some cultural connection to the offender which they lack with their fellow American citizen.  Well, this is exactly and obviously the case.

The good news for the FBI is that, in this scenario, there is a near infinite amount of work and little likelihood of success.  In bureaucracies, this is known as “job security” and is likely to result in greater funding.  However, no such benefit seems to accrue to the American people.  The American people are trapped between a political correctness our society, for some reason, insists on and a government with no commitment to the safety of her citizens.  One would think that Muslims, realizing the obvious problem of Islamic terrorism, would purge their neighborhoods of these offenders.  If this is too difficult, they could absent themselves to make the FBI’s task easier.  They could then return to their neighborhoods safer and receiving credit for acting in the interest of all Americans, their own devotion to the success of this nation then being obvious.  But this does not happen – ever.  It is foolish not to consider why.

At the beginning of this article, I suggested that through this analysis we would find a more accurate analogy.  I think we did so with the phrase, “Looking for a specific piece of hay in a haystack.”  I also suggested that a solution might be found to the problem of Islamic Terrorism.  It is obvious that there is just no meaningful distinction between one stalk of hay and another.  Is this the situation in the Muslim community?  Is there any useful distinction, before the body count, between a terrorist and those who hide the terrorist, giving him aid and comfort?  If this aid and comfort requires no real action on the part of any given Muslim, does it somehow cease to exist?  Of course it doesn’t.  This is the situation we are in.  The haystack is the problem.

There is a fundamental question at the heart of this problem: Is good simply the absence of evil, or does it require some proactive expression of goodness?  In being “good,” are we called upon to actually do something good rather than simply not actively engage in evil?  It is a higher bar, but I think the answer is obvious.  We cannot truly be considered good while refraining from actively engaging in acts of goodness, especially in the face of an aggressive evil.

This brings us back to the second solution.  No, I am not suggesting we burn the hay.  But we must recognize that the haystack is the problem and treat it as such.  As long as we embrace this haystack, we are embracing the problem. The huge societal question we have relentlessly avoided is, “What is the value of all this hay?”  This must be balanced against, “What is the cost of this terror?”  Are we willing to stand by and wring our hands endlessly as this relentless carnage becomes our new accepted way of life?  Or do we remove the haystack from within our borders?  There is no middle of this road.  We do or we don’t.  Either we have this problem, realizing that we consciously accept it along with all its attendant evil, or we reject this evil along with any ancillary benefit which may come with it.

Do we continue to grant to Islam, the mantle of religion with all of its protections, or do we recognize it for the imperialistic political movement it has so often admitted to being?  Once we declare it to be a hostile political movement, we can deport all of its non-citizen practitioners.  While President of the US, even the spineless Jimmy Carter ordered the deportation of thousands of Iranians during the hostage crisis.  See article here.  Additionally, we can put all US citizen Muslims on a watch list and restrict their access to weapons.  We would have a duty to do so. To cover the cost associated with managing the threat Muslims represent by their very presence, we can impose a tax on them just as they tax Christian and Jews living in Muslim dominated countries.  We can monitor and close mosques found to be hostile to the US.  We can arrest and hold certain Muslims for specific periods while their activities are investigated.  Imams should be required to register as political predators and should be denied access to inmates in the prison system.  Without serious actions like these and others, specifically designed to curb this serious threat, the hand wringing of our political leaders will just insure an ever increasing body count of innocent Americans.  Our political leaders will never connect the dots as long as they cannot say the word “dots.”  We must recognize the difference between the dangerousness of a moderate Muslim and a radicalized Muslim is the same as the difference between the wetness of the water at the shallow end of the pool and the water at the deep end.

What to do?  Actively lobby your Congressman and Senator.  Any representative of the people, who is not willing to commit to serious action on this issue, is not only undeserving of your vote, but should be the focus of your efforts to turn him/her out at the next election.  To be truly good and deserving of the title, “American,” we must proactively engage in the fight against this obvious evil.

Post Script: The recent attack in Turkey tells us, a nation becoming more Islamic only encourages more attacks.  The only path to success, the only way to insure the citizens are free from Islamic terrorism is to remove the scourge of Islam from your nation.

We all understand this threat. We all know what to do when we encounter it. Click (here).  We just need to be honest about it with both ourselves and others. 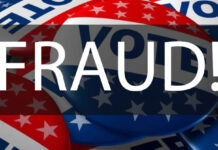