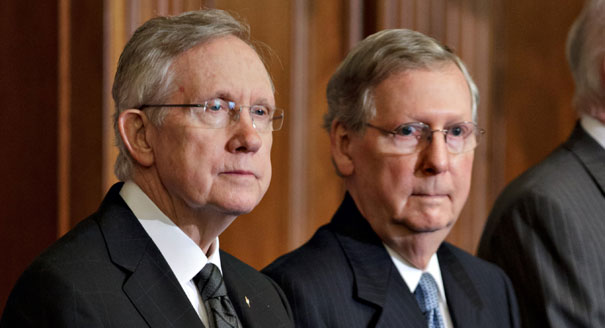 Louisville, KY – Thirty-year incumbent Mitch McConnell is so worried about Matt Bevin’s momentum he is up with a new ad, slinging mud and running away from his record.

“It is truly sad to see Mitch McConnell sink to such a desperate low, simply because he is afraid of defending his record of voting for bailouts, tax increases, debt limit increases, and pay raises,” Matt Bevin said. “Now, Mitch McConnell is refusing to defund Obamacare and, instead of explaining why he is siding with President Obama, he has resorted to slinging mud. Kentucky taxpayers deserve better.”

Here are the facts:

Bevin Bros.: Bevin Bros. was in financial trouble and failed to pay its taxes for several years before Matt Bevin was even involved. In 2008, he received a call from the company and tried to help out by personally loaning the company money. Since that time, Matt turned the company around and saved 20-plus jobs while keeping a historic company in America – the only dedicated bell company left in North America. This is a testament to Matt’s character, hard work and commitment to keeping manufacturing jobs in the USA. Mitch McConnell would recognize this if he knew something about how the private sector worked. As a career politician, however, he, unfortunately does not.

In a letter from Michael Maniscalco, Town Manager for East Hampton, CT, he confirms that the tax liens preceded Matt’s involvement and that Matt saved the company:

In a letter from Bevin Bros. employees, they write:

“We are employees of Bevin Bros Mfg Company. We are located in Belltown, USA. We would like to publicly declare our support for our company and the jobs that it provides. In 2008, the company owner decided to shut down the company after 176 years of continuous operation…Matt Bevin, the owner’s nephew, is a successful businessman who lives in Kentucky. He was asked if he could help in any way to cover payroll in the short-term as the company was being shut down. None of us knew Matt Bevin at the time. Matt stepped in with his personal money and saved our jobs by saving our company…” Read the full letter and other letters here.

In a statement from Doug Dilla, the foreman at Bevin Brothers at the time of the company’s business troubles, he describes how Matt saved the company and saved vital American jobs:

“In 2008, I contacted Matt regarding Bevin Bros. Mfg. At the time, I had been the general foreman at Bevin Bros. for 17 years… Matt’s uncle who owned the company had been having health issues and there was no top level management to step in and run the company. The company was in debt and was not meeting its obligations. Matt came to visit to see what he could do to help. He stepped in and started putting money and expertise into the business. A modest turnaround was evident almost immediately… This turnaround took place even before Matt took actual ownership from his uncle in August 2011. I know better than anyone the shape the company was in before Matt took over. At most the company was just weeks from closing its doors. That would have been a loss of jobs for approx. 20 people, some who had worked at Bevin Bros. as long as 60 years…” Read the full letter here.

Matt’s home: This was simply a mix-up with a new mortgage company. As soon as Matt was made aware of the lapse, he paid off the account in full in less than a month’s time.

In a letter from Kimberly Sparks, tax collector for Greenwood, Maine, she writes that Matt is an upstanding citizen who has always paid his taxes on time and took care of the mix-up immediately:

“I remember Mr. Bevin contacting the office in January of 2009 inquiring about the status of his taxes as he was concerned that his accounts were paid by his new mortgage company. He was surprised to learn of the two tax liens and said he would contact his escrow agent to get them paid. By February of 2009, both liens were paid by National City Mortgage and were discharged by the Town. Mr. Bevin has always paid his taxes on time with this one exception with a new mortgage company.” Read the full letter here.