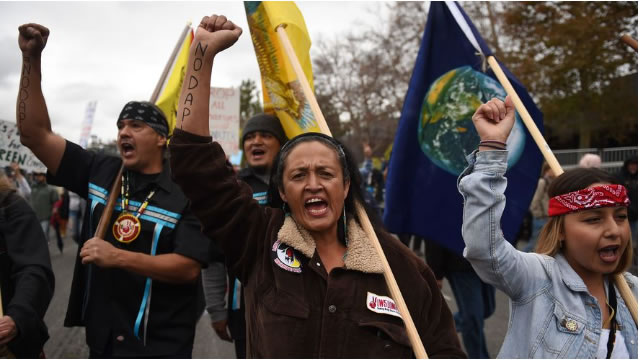 According to a hotair.com article entitled “Buttigieg agrees that illegal aliens are ‘reclaiming stolen land’,” Democrat Presidential Candidate and South Bend, Indiana Mayor Peter Paul Montgomery Buttigieg (AKA: Mayor Pete) was speaking with the Reverend William Barber when the subject of illegal immigration came up.

Barber wondered, “Why can’t we just own in America that some of the people that are trying to come from Mexico here are coming back to land we stole, and the reason we took the land is because people wanted to keep their slaves?”

Mayor Pete’s tacit acceptance of Reverend Barber’s proposition that illegal (AKA in PC speak: “undocumented”) immigrants are coming to America to reclaim land stolen from them by white settlers, has ignited a controversy in the Hoosier state.

The Indiana of today is a quilt-works of nearly a dozen Treaties – as shown in the map below – negotiated with Native American Indigenous Communities (NAIC) under conditions that worked against their, the NAIC’s, best long-term interests. 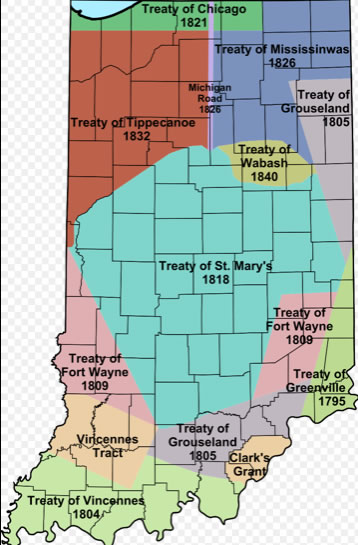 Here’s a grim summary of how the NAICs were removed from Mayor Pete’s state:

“Indian removals in Indiana followed a series of the land cession treaties made between 1795 and 1846 that led to the removal of most of the native tribes from Indiana. Some of the removals occurred prior to 1830, but most took place between 1830 and 1846. The Lenape (Delaware), Piankashaw, Kickapoo, Wea, and Shawnee were removed in the 1820s and 1830s, but the Potawatomi and Miami removals in the 1830s and 1840s were more gradual and incomplete, and not all of Indiana’s Native Americans voluntarily left the state. The most well-known resistance effort in Indiana was the forced removal of Chief Menominee and his Yellow River band of Potawatomi in what became known as the Potawatomi Trail of Death in 1838, in which 859 Potawatomi were removed to Kansas and at least forty died on the journey west. The Miami were the last to be removed from Indiana, but tribal leaders delayed the process until 1846. Many of the Miami were permitted to remain on land allotments guaranteed to them under the Treaty of St. Mary’s (1818) and subsequent treaties.

Between 1803 and 1809 William Henry Harrison negotiated more than a dozen treaties on behalf of the federal government that purchased nearly all the Indian land in most of present-day Illinois and the southern third of Indiana from various tribes. Most of the Wea and the Kickapoo removed west to Illinois and Missouri after 1813. The Treaty of St. Mary’s led to the removal of the Delaware, in 1820, and the remaining Kickapoo, who removed west of the Mississippi River. After the United States Congress passed the Indian Removal Act (1830), removals in Indiana became part of a larger nationwide effort that was carried out under President Andrew Jackson’s administration. Most of the tribes had already removed from the state. The only major tribes remaining in Indiana were the Miami and the Potawatomi, and both of them were already confined to reservation lands under the terms of previous treaties. Between 1832 and 1837 the Potawatomi ceded their Indiana land and agreed to remove to reservations in Kansas. A small group joined the Potawatomi in Canada. Between 1834 and 1846 the Miami ceded their reservation land in Indiana and agreed to remove west of the Mississippi River; the major Miami removal to Kansas occurred in October 1846.” (Source: Indian Removals in Indians)

Mayor Pete’s comments have kindled efforts by several NAICs evicted from the state, which today carries the word INDIANa in its name, to be reunited with their ancestral lands.  Some have begun protesting the injustice done to them (see picture above).

Mayor Pete’s effort to bring justice to former landowners in South Bent has, to date, only been expressed in a land grant to the Pokagon Band of the Potawatomi NAIC enabling them to build a Casino in South Bend.

In the photo below, Mayor Pete “shakes hands with John Warren, chairman of the Pokagon Band, during news conference, Wednesday, Dec. 7, 2016, in South Bend, Ind. The Pokagon Band of Potawatomi tribe, the first Indian tribe in Indiana to have land returned to it from the federal government, announced plans to build a casino in South Bend that will open in early 2018.” 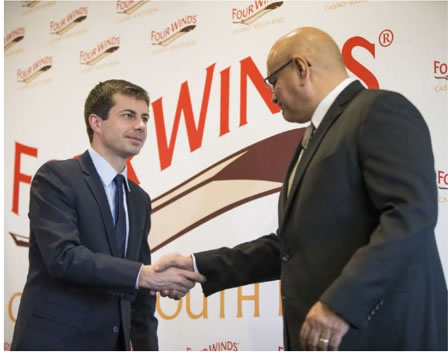 Several other NAICs that have not been repatriated with their ancestral lands in Indiana feel slighted by Mayor Pete and other Indiana politicians.

If elected President of the United States, President Buttigieg is likely to lead a nationwide effort to return many NAICs to their native lands, and, perhaps, facilitate the construction of a virtual archipelago of “Indian Casinos” from sea-to-shining-sea.

The Four Winds Casino in South Bend is now open for gambling. 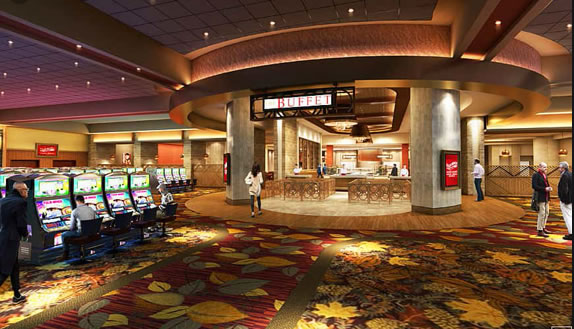