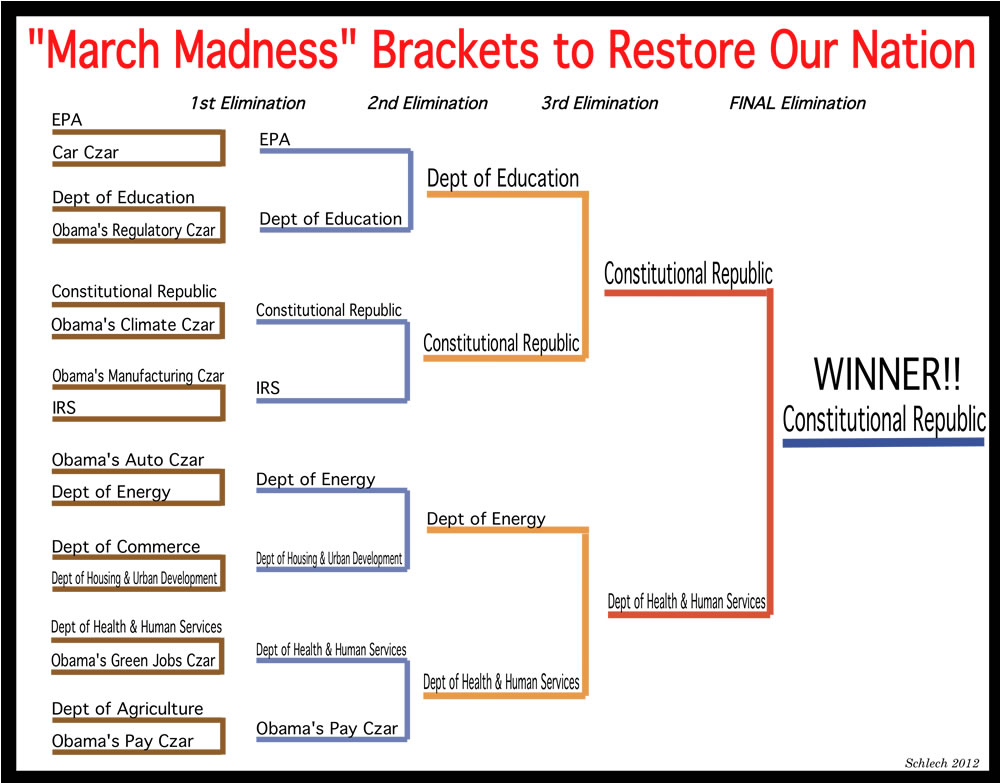 President Obama is obsessed with basketball and the 2012 “March Madness” NCAA Basketball Tournament. There is nothing wrong with loving a sport, but I wish Obama would be “as obsessed” with presidential leadership and doing the country’s business. He is focused on the “basketball NCAA brackets”, campaigning, initiating unconstitutional policies, over-regulating our businesses, suing our states. He might consider doing more “presidential things” for the USA, like securing our borders, supporting our military, solidifying our foreign alliances, communicating a cohesive foreign policy, solving the energy crisis, or any other major activity outlined in the U.S. Constitution for the Executive Branch. Because of his efforts, the U.S. Government has grown significantly larger with burgeoning departments obviously necessary to perform all those unconstitutional tasks that President Obama has chosen to do.

The tournament on the attached chart would do much to reduce the size of our government. The 4-step elimination scheme is a suggested pathway to a Constitutional Republic. With each elimination of a Federal organization or executive department, one more useless and non-productive Federal agency can be sent to “loser trash heap”. As we move through the brackets from left to right, slimming down Government, we shed billions of dollars as the “losers” disappear from the landscape. After 4 Elimination Rounds, we might be left with the lean, mean and constitutional Republic that the founders envisioned. Basketball tournaments are fun, but not when America is in such dire straits. Also, I am not against government, but I am against ineffective leaders and unconstitutional federal departments and policies.