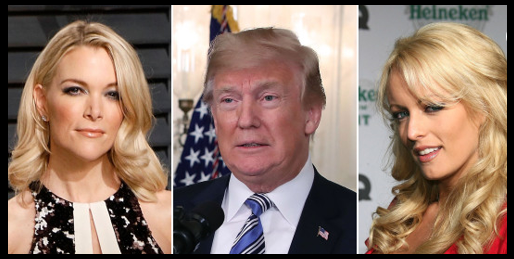 Anonymous sources report that CNN is planning a new daytime talk show for the summer 2018 broadcast season in preparation for the November midterm elections.

The prospective format will feature Kelly and Daniels interviewing political and media personalities who have, in one way or another, felt threatened by President Donald Trump.

The 2 hosts-on-1 guest format, with two equal interviewers, will be similar to The Tonight Show hosted by Johnny Carson and Ed McMahon.  In that case Carson was the lead star and McMahon the support performer.

In the Kelly and Daniels format, each will take turns leading the discussion with a guest.

In the first three shows of the summer broadcast seasons, three special guests will appear:

Persons familiar with the concept origination of the new show point to an article posted on pagesix.com entitled “Megyn Kelly: Threat to Stormy Daniels sure sounded familiar.”

That article began with:

“Megyn Kelly says she has something in common with Stormy Daniels.

They both claim to have been threatened by people on behalf of President Trump.

During “60 Minutes” on Sunday, Daniels — who claims to have had an affair with Trump in 2006 — said that after she tried to go public with the story, ‘A guy walked up on me and said to me, ‘Leave Trump alone. Forget the story.’ And then he leaned around and looked at my daughter and said, ‘That’s a beautiful little girl. It’d be a shame if something happened to her mom.’ And then he was gone.’

After the interview, Kelly tweeted, ‘And let’s not forget this, from #coreylewandowski — who threatened me if I dared to show up at the 2d Fox News debate. Sound familiar?’”

Half of the first show will be devoted to the hosts sharing their experiences of feeling threatened by Trump.

According to a confidential source, at least four names are being considered for the show: Megyn & Stormy; Stormy & Megyn, M & S, and S & M.