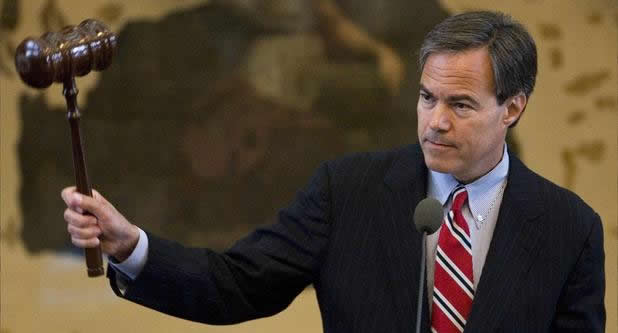 It is difficult for me to understand why anyone would not see a “conservative Texas” as the shining star in the nation. People are flocking here to get a job, buy a reasonable home and have the individual freedoms and liberties that our forefathers valued so dearly. It is a haven of sanity in a nation lost and filled with nonsense.

This is why I can’t comprehend why our Texas Legislature wouldn’t be doing everything possible to maintain, preserve and espouse these precious conservative values here in Texas.  We have proven that conservative ideas work. Look at the cities and states run by liberals for decades…. Their plight and blight are evident….on the cusp of bankruptcy, welfare havens, urban decay, lousy schools, high unemployment, bloated government, out-of-control public employee retirements, and silly or destructive bureaucratic policies. Their nirvana or utopia has yet to be reached even after decades of control.  Simply, the Democrat dominated entities are not working.

So, back to Texas. We have a Legislature battling for control of liberal vs. conservative ideals. With paragraph #2 above, why would we even consider a move to parallel liberal cities or states? A conservative Texas is the light of the nation going forward. What is it with House leaders?  U.S. Speaker of the House, John Boehner, is coming under fire from conservative Republicans for buckling under liberal pressures and being a bad negotiator with Obama. He also is the face of ‘moderate Republicans” who are too willing to “work across the aisle” and “compromise” those solid Republican and conservative principles.  Such is also the case in Texas. Joe Straus, the Speaker of the House for the last [82nd] Legislative Session, is also being pummeled with criticism for not supporting those conservative principles widely supported by most Texans.  He has gone counter to these principles and even undermined the very strong conservative components in the Texas House. Joe Straus may be a Republican, but he is no conservative. Although very powerful, he has polarized the state party and is not a leader of mainstream Texas that happens to now be mostly conservative.

Why?…money?, influence?, power?, enhancing his business enterprises? Are these his motivations? Of course they are!

For their very first vote in the 83rd Texas Legislature, any Republican House Representative who votes to re-instate Joe Straus as Speaker of the Texas House is making a grave mistake.  Their conservative constituents will be rightly out-raged since many tea party and conservative groups helped them win their primaries and the general election. A vote for Joe Straus will be seen as a serious betrayal of their trust and vote. It also will be clear, documentary evidence that they see their political careers and advancement as more important than their representation responsibilities to their citizens. “We, the People” will be very angry. We have money, passion and …memories.

“I wholeheartedly endorse my friend David Simpson for Speaker of the House. David is uniquely qualified to lead the House at this pivotal time in our history. David Simpson has earned his reputation as an eminently fair, highly principled, and hardworking legislator.”